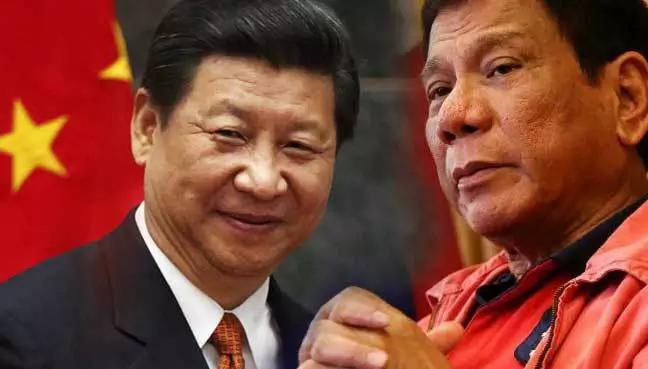 Though better known for his brutal war on drugs at home, the Philippine leader's volatile, one-man diplomacy could up-end 70 years of U.S. dominance in East Asia.
By Walden Bello | November 2, 2016

Just into his fourth month as head of state, President Rodrigo Duterte of the Philippines has managed to become one of the most controversial actors on the global stage, rivaling if not eclipsing Donald Trump.

Not least there’s his war on drugs at home, which has already seen the extrajudicial executions of what some current estimates put at over 4,000 users and peddlers — and won him the title of “serial killer” on French television. But Duterte is also shaking up the geopolitics of his entire region.

The former Davao City mayor, who not long ago called U.S. president Barack Obama a “son of a bitch,” recently declared a “separation” from the United States and “alignment” with China and Russia during a state visit to Beijing. This brash departure from 70 years of alignment between the U.S. and the Philippines alarmed and befuddled other U.S.-allied governments in East Asia.

Foremost among these is the government of Prime Minister Shinzo Abe in Japan, which has been tightening its ties with Washington and considers the Philippines a vital element in the U.S.-Japan strategy of encircling China and limiting its capability to project maritime power. A recent visit to Tokyo by Duterte did little to reassure the Japanese. Coming out of a meeting with Duterte, a top foreign policy official of the Japanese government told me that he found Duterte “unnecessarily provocative” towards the United States.

What exactly is Duterte up to, and why are the Philippines’ neighbors so alarmed?

If I were to break down the complex political animal that is the president, I would probably highlight the following elements:

First, one must not underestimate his personal history and psychology. Duterte is likely to have retained the anti-American sentiments that were prevalent during his student days in Manila in the 1960s. He is also a very thin-skinned person, so he took U.S. criticism of the extrajudicial killings that have been the trademark of his war on drugs personally. He sees no distinction between himself and the state, and thus views criticism of himself as an assault on national sovereignty. L’etat, c’est moi may well be the most fitting description of the way Duterte views his relationship to the Philippine state.

Duterte may therefore be attracted to China because its authoritarian system appeals to his own strongman personality. Beijing’s willingness to rebuff U.S. criticism of China’s human rights record likely appeals to the Philippine leader, who similarly views his domestic policy as none of Washington’s business. This political and psychological affinity towards Beijing is something that must not be underestimated.

Second, being a lawyer, Duterte knows that despite its military treaties with the Philippines, Washington’s position is that the U.S. is not legally obligated to support and protect the Philippines’ territorial claims in the South China Sea, or West Philippine Sea, where Beijing and Manila have been at loggerheads for years. Despite claiming the Philippines as a “collective defense” partner, the U.S. has been explicit that it “does not intervene” in sovereignty issues.

Duterte understands that all the U.S.-Philippine Enhanced Defense Cooperation Agreement of 2014 did was to put the Philippines on the U.S. side of a superpower struggle with China, with all the costs and few of the benefits that go with being a junior partner of such an alliance. Despite his penchant for “ideological” statements (when he is not uttering curses), Duterte is a foreign policy realist who knows that Washington’s strategic goal is to contain China, scorns U.S. rhetoric about being a benevolent hegemon, and is impatient with claims that there is a coincidence of interests between Washington and Manila.

His pragmatic streak is also evident in his ambiguous statements on the future of the defense treaties with the United States. Although he might be bent on pushing for a more independent policy for the Philippines and distancing Manila from Washington, he is not likely to immediately scrap the existing military treaties with the United States. He may, however, put them in cold storage.

Duterte vs. the System

In any event, whatever his motivations for distancing himself from Washington and declaring his alignment with China, Duterte’s behavior constitutes a profound challenge to the post-World War II system of regional security in the Asia-Pacific. That system has had three basic assumptions.

First, the countries of East Asia cannot be relied to on to create a system of regional peace and security by themselves.

Second, only U.S. military power and a system of U.S.-dominated bilateral alliances with Japan, South Korea, the Philippines, and Australia can maintain regional peace and security — not a multilateral system like NATO in Europe or a collective security agreement incorporating rival countries.

Third, the interests or Washington and the interests of the Asia-Pacific countries coincide, making the U.S. not a coercive but a benevolent hegemon.

Whether he realizes it or not, in other words, Duterte is putting a spanner not only in U.S.-Philippine relations, but on a whole system of regional security. That’s why the elites of Japan, South Korea, the Philippines, and a number of Southeast Asian countries that are wedded to this system are worried about him and the example he poses to other peoples in the region. From their point of view, he is a destabilizing element.

From the perspective of many others like myself, on the other hand, Duterte has the potential to unfreeze the glacial structure of security left over from the Cold War and open the way to a new regional system of peace and security that does not rest on an increasingly volatile balance of power strategy promoted by Washington and supported by dependent elites.

But key questions remain: Is this all bluff and bluster? If not, will Duterte’s disengagement from the U.S. continue to be a volatile one-man show, or will it be pursued systematically? In moving away from Washington, will Duterte be able to forge a strategy that would avoid making the Philippines a dependency of China?

And, of course, one cannot discount how Washington would react should it come to the conclusion that Duterte really means business.

The U.S. and Philippine military and intelligence establishments have very close ties that go back to the colonial period. The U.S. supported the Philippine dictator Ferdinand Marcos, and it played a key role in deposing him when he became a liability. Washington knows that it stands not only to lose the Philippines, but also to see the whole edifice of its regional hegemony since the end of the Second World War seriously compromised.

Diplomatic isolation of Duterte could be the U.S. response, which is why Duterte’s patient cultivation of neighbors like the ASEAN countries and even core U.S. allies like South Korea and Japan — if not to win them over to a new paradigm of regional security, at least to neutralize them — is a must for the Philippine leader.

But the U.S. response could be more ruthless, perhaps entailing U.S.-orchestrated destabilization on the domestic front. This is why, if not an effective consensus, Duterte needs a critical mass behind any realignment away from Washington, especially since pro-American feelings remain widespread in the population. That critical mass remains to be forged.

Many potential supporters fear that Duterte’s unplanned, indeed haphazard, way of going about his project may derail it and provide the U.S. with the opportunity to destabilize his administration. Others are put off by what they see as his indiscriminate embrace of China, seeing this as exchanging one master for another. To win them over, Duterte needs to show a hardnosed approach towards the Chinese, like phasing out the U.S. military presence in the country as a bargaining chip for China’s demilitarizing its presence in the South China Sea.

And not least, many supporters of a more nationalist Philippine course are reluctant to lend active support to Duterte since they are repelled by his murderous ways of imposing “law and order” on the domestic front. To gain their backing for his realignment, he may have to do nothing less than stop the killings. Duterte would do well to ponder this seriously, since these are serious nationalists, unlike many of his current political backers.

Rodrigo Duterte has indeed kicked up a storm. It remains to be seen whether Typhoon Duterte will gather strength or peter out in the foreseeable future. The outcome will greatly depend on Duterte himself. One thing is certain: If he continues to conduct his diplomacy as a bombastic one-man show, he is bound to fail.

Foreign Policy In Focus columnist Walden Bello is senior visiting research fellow at the Center for Southeast Asian Studies at Kyoto University. A former member of the Philippines’ House of Representatives, Walden Bello was the co-author of two joint resolutions to abrogate the U.S.-Philippine Visiting Forces Agreement. He made the only resignation on principle in the history of the Congress of the Philippines in 2015, owing to differences with the previous administration of President Benigno Aquino III, among them his disapproval of Aquino’s signing the Enhanced Defense Cooperation Agreement with the United States.