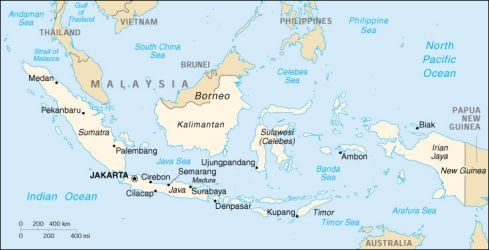 Since Indonesia’s invasion of East Timor in 1975, the U.S. has supplied the Indonesian army with more than $1 billion in arms.
By Lynn Fredriksson | October 11, 2005

The half-island nation of East Timor was a colony of Portugal for some 450 years. After the Portuguese dictatorship fell in April 1974, the Indonesian government began to intervene in the decolonization process. When it became clear that it had little political support in East Timor, the Indonesian regime launched a military offensive from West Timor and fomented a civil war in the summer of 1975.

East Timor declared independence on November 28, 1975, and Indonesia invaded East Timor on December 7. President Gerald Ford and Secretary of State Henry Kissinger met with Indonesian dictator General Suharto hours before this invasion. They gave Suharto a de facto green light for the aggression, beginning a long history of U.S. government complicity with Indonesian repression of the East Timorese. The U.S. continued its support for Indonesia’s armed forces (then called ABRI, now TNI), supplying $1.1 billion in weapons in the 1975-99 period.

Between 1972 and 1982, the United Nations passed two Security Council and eight General Assembly resolutions condemning Indonesia’s invasion, calling for its immediate withdrawal, and supporting East Timor’s self-determination. The U.S., however, was instrumental in blocking any additional UN action. In the aftermath of the U.S. defeat in Vietnam, Washington viewed Indonesia as a critical ally in the cold war. During the 1980s, concerns about repression in both East Timor and Indonesia were largely subordinated to U.S. geopolitical and economic imperatives in the region.

ABRI, which counted on U.S. aid and training, napalmed and displaced entire villages and disappeared, raped, tortured, and murdered civilians in an attempt to break the backbone of the resistance. More than 200,000 East Timorese, a third of the pre-invasion population, died as a result of this repression—either directly at the hands of the Indonesian police and military or indirectly as a result of starvation and disease.

In May 1998, amid massive political protests and economic crisis in Indonesia, Suharto stepped down and was replaced by B.J. Habibie, his handpicked successor. Realizing that stability for Jakarta’s elite required the appeasement of a world community no longer tolerant of Indonesia’s abuses, Habibie proposed a form of autonomy for East Timor. But the East Timorese would accept nothing less than independence. In January 1999 Habibie conceded. As Indonesia, Portugal, and the UN negotiated the terms of a transition, the Indonesian military quietly stepped up its operations in East Timor, including arming anti-independence militias. On May 5, 1999, Portugal and Indonesia signed an agreement that sent UN personnel into East Timor to prepare for the August 30 plebiscite. In a critical flaw, the plan left responsibility for security to Indonesia during the transition. This allowed the Indonesian military, police, and local militias to terrorize East Timor for several months. Nevertheless, turnout was an incredible 98.5%—with more than 78% voting for independence. The cost was severe: over the following weeks, the TNI and various militias killed over 1,500 people, razed 70% of East Timor’s infrastructure, and displaced two-thirds of East Timor’s population.

Reacting to this new wave of violence, the U.S., Britain, and Australia imposed an arms embargo on Indonesia. Together with the IMF and the World Bank, these nations threatened to withhold international financial assistance unless the violence ended. Indonesia began to withdraw its troops, and an Australian-led international force (InterFet) arrived in October 1999 to restore order in East Timor. Soon afterward, the UN Transitional Administration in East Timor (UNTAET), empowered to assist East Timor to full independence, took over management of the political transition.

As East Timorese turn toward the challenges of reconstruction and reconciliation, the Indonesian government of Abdurrahman Wahid has proved either unwilling or unable to control the militias that continue to terrorize the 100,000 East Timorese refugees trapped in camps in West Timor.

By 1998 both houses of Congress, led by Representatives Patrick Kennedy (D-RI), Nita Lowey (D-NY), and Chris Smith (R-NJ) and Senator Russ Feingold (D-WI), went on record supporting self-determination in East Timor. In December, Secretary of State Madeleine Albright called for the release of imprisoned East Timorese leader Xanana Gusmao. By early 1999 the State Department was backing calls for a referendum in East Timor.

In September 1999, as East Timorese fled to the mountains or were abducted by the military and militias to West Timor and elsewhere in Indonesia, President Clinton terminated all U.S. military ties to Indonesia and suspended pending U.S., World Bank, and IMF loans and assistance. Clinton insisted that Indonesia stop the violence in East Timor and allow international intervention. Indonesia succumbed, withdrawing troops and allowing multinational InterFet forces to enter. Senator Patrick Leahy (D-VT) led Congress in banning resumption of U.S. military training and weapons transfers until key conditions regarding refugee return and accountability are met.

Although Congress has successfully halted almost all military aid to Indonesia, U.S. armed forces held joint exercises, and U.S. military officials made several visits to Indonesia before a full suspension was reimposed in September 2000. When militias killed an American and two other UN High Commission for Refugees workers in West Timor in September 2000, the international community again demanded that Indonesia disarm and disband the militias in West Timor. The Indonesian government promised to take serious action. By late 2000 it had confiscated homemade weapons and had arrested militia leader Eurico Guterres, although dozens of other militia leaders still operate, and the militias remain well-armed.

The U.S. has declined to provide full support for an international human rights tribunal that would examine the abuses and killings. Some U.S. policymakers contend that Indonesia must be given more time to try military and militia leaders guilty of crimes committed in East Timor. Despite the courageous efforts of Indonesian Attorney General Marzuki Darusman and the apparently good intentions of President Wahid, Indonesian military hard-liners have reclaimed key positions. The Indonesian parliament has reserved 38 seats for the military until 2009 and has passed a constitutional amendment preventing retroactive prosecutions. According to Aniceto Lopes, director of East Timor’s leading human rights foundation, the only way to realize justice for East Timor is by the convening of an international human rights tribunal.

U.S. support for the UN and bilateral assistance for East Timorese NGOs has been adequate, although USAID programs are only short-term and as such are not sufficient for longer-term sustainable development. The support of the U.S. Agency for International Development (USAID) for East Timor’s organic coffee cooperatives, for example, is widely viewed as positive, although concerns have been raised over USAID’s emphasis on agricultural export production rather than on diversified agricultural development. USAID’s Office of Transition Initiatives is providing useful short-term employment programs and start-up grants to East Timorese NGOs.

But the U.S. and other donor nations have been unwilling to use significant political and economic influence to further reconciliation and justice in East Timor. Oftentimes, they appear to be more interested in appeasing the Indonesian government and military for the sake of maintaining economic and political stability. For example, at the October 2000 World Bank-coordinated meeting of foreign aid donors, known as the Consultative Group on Indonesia, no donor nation made any real attempt to condition new lending to ensure that the Indonesian government lives up to its promises to respect human rights and rein in the military.

Few U.S. corporations have yet invested in East Timor, although Phillips Petroleum operates with other companies to extract oil from the Timor Gap waterway. The old contract between Indonesia and Australia regulating access to the resources of Timor Gap is being renegotiated to ensure a fair profit for East Timor.

Positive steps toward reconstruction and development are still jeopardized by continuing threats from militias and the failure to arrest war criminals. The political and economic future of East Timor requires reconciliation, security, and accountability, but this foundation is threatened by the impunity of the Indonesian military and militias.

Political changes over the past few years offer new opportunities for positive transformations in East Timor and Indonesia. But the U.S. continues to subordinate human rights concerns to economic and strategic considerations throughout the Indonesian archipelago. To compensate for its past complicity in Indonesia’s occupation of East Timor, Washington should release government files concerning U.S. involvement in Indonesia—including intelligence files on Indonesia’s 1975 invasion, its subsequent occupation, and the Indonesian government’s role in the 1999 exodus from East Timor. Another promising action would be passage of the East Timor Transition to Independence Act, which would provide security and economic assistance plus $25 million in bilateral financial assistance annually for three years—to promote civil society, an independent media, economic development, and reconciliation. This bill would also establish formal diplomatic ties, tariff-free status, and U.S. scholarships for East Timorese students.

The United States should support reconstruction and development efforts by maintaining current levels of bilateral and multilateral funding for East Timor. USAID should build on its successful transitional programs by funding new projects that help foster civil society development and generate employment.

The foundation for a secure East Timor must rest upon reconciliation and accountability under the rule of law. But Indonesia’s struggling attorney general’s office cannot provide that foundation alone. Indonesia is incapable of trying militias and Indonesian military officers responsible for atrocities committed in East Timor. An international tribunal is necessary to investigate the violence that followed the 1999 referendum for independence as well as the crimes committed during Indonesia’s occupation. Such a process is essential for reconciliation to occur in East Timor. U.S. support for an international tribunal would complement U.S. support for the reform of Indonesia’s judicial system, which would have the effect of furthering democratization and demilitarization in Indonesia. In this respect, the fates of East Timor and Indonesia are intertwined: East Timor will never be wholly safe until Indonesia is fully under civilian control.

Within Indonesia, popular attention is fixed on domestic concerns—corruption, ongoing military control, judicial reform, and overall economic welfare. The U.S. should maintain a full suspension of military ties. Washington should use its bilateral economic aid program and its influence with international financial institutions to pressure Indonesia to respect human rights and the rule of law. U.S. officials should not only insist that militias be disarmed and disbanded but also that militia leaders be arrested and, when requested, extradited to East Timor. The extradition of militia leaders, many of whom have been threatened by TNI officials if they reveal what they know, could ensure their safety and hasten refugee repatriation.

Indonesia’s continued military rule and unchecked military atrocities in Aceh, Papua, and Maluku attest to the lack of respect for human rights in Indonesia. Thus, the U.S. administration, Congress, and the Pentagon should carefully weigh the consequences of any renewal of military ties with Indonesia. Such action should not be undertaken prior to Indonesia’s establishment of civilian control over the military and the end of military abuses throughout the archipelago. U.S. restraint in providing new military aid would not only contribute to an increased respect for human rights but would also enhance long-term stability and democracy in Indonesia.

Lynn FredrikssonLynn Fredriksson is the departing Washington representative for the East Timor Action Network and the interim coordinator for the Indonesia Human Rights Network.