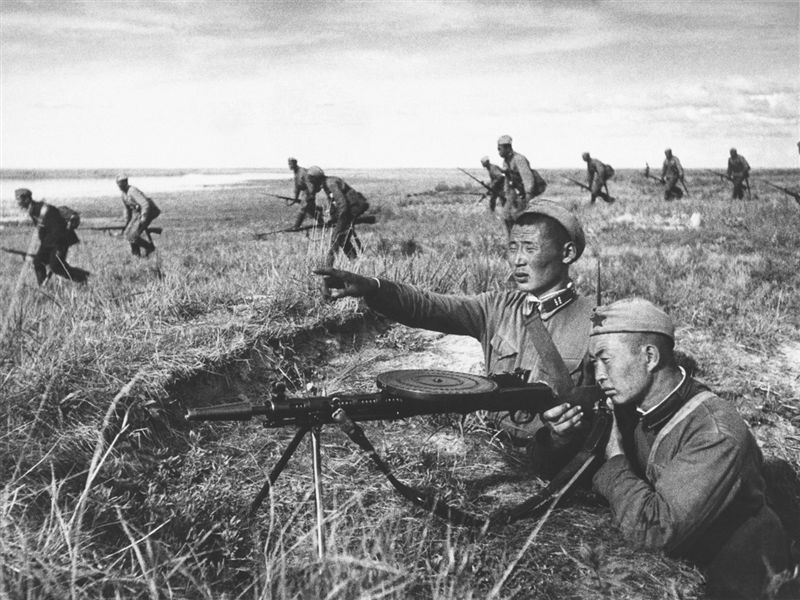 If asked to identify the world’s hotspots—the most conflict-prone geographical regions—few Americans would point to Northeast Asia, the confluence of China, Russia, Japan, Korea, and Mongolia. Perhaps some people would identify North Korea as a flashpoint, but that is in fact, a sideshow. The region has been the scene of massive population shifts, moving borders, empires won and lost, and decades of devastating warfare.

Currently, an expanding and irredentist China has conflicts with all its neighbors and can be correctly seen as a striving hegemonist. But in the last century, the aggressive power was Japan which tried and nearly succeeded in establishing its empire throughout the region, including Siberia as far west as Lake Baikal.

Except that the Russians stopped them.

The land struggles are continuations of the expanding empires of Russia in the Far East and China beyond its current borders, of Japan’s perennial need for resources, of trampled ethnicities and indigenous peoples, and the specter of inflated nationalism. At one point in 1939, though, these conflicts came to a head in Mongolia in a battle that ultimately solidified what would become today’s borders.

The Scene of the Battle

The fighting centered around the village of Nomonhan in Eastern Mongolia, situated on a small river on a grassy, scrubby, rolling sand plain—far from a major town and sparsely populated by herdsmen. The Japanese named the conflict the Nomonhan Incident, after the village; the Russians called it the Battle of Khalkhin Gol, for the adjacent river.

Nomonhan was—and remains—thoroughly out of the way. The war there never attracted much attention, and today is little-known except to historians and war video gamers, although the incident did feature prominently in Haruki Murakami’s novel The Wind-Up Bird Chronicle. Given that 60 percent of Americans don’t know who the United States fought in World War II, it’s not too surprising that this piece of history remains obscure. But Nomonhan was arguably the most pivotal battle of World War II, determining the paths of both the European and Pacific theaters.

According to historian Ryan Schultz, “Despite its unspectacular terrain, this area had major strategic value; if the Japanese were able to control Mongolia, they would severely threaten the Soviet Far Eastern territories, cripple the most effective base for Soviet activities in North China, and be in a perfect position to attack the Trans-Siberian Railway in the event of war between Japan and the Soviet Union.”

In truth, Japan and Russia had been in a semi-state of war since the late nineteenth century when Tsar Alexander III pushed for the expansion and development of Eastern Siberia. Conflict with Japan over the islands of Sakhalin and ice-free ports on the Pacific came to a head in the Russo-Japanese War of 1904-05 which the Japanese decisively won on the battlefield and at sea. But they failed to gain much due to the Treaty of Portsmouth, brokered by Theodore Roosevelt, which brought, if not peace, then a workable truce.

The Japanese fully expected the Russians to avenge their defeat at the nearest opportunity. As a means of preemption—and because of Imperial Japan’s deathly fear of communism—the Japanese military intervened in force in 1918, taking over the port city of Vladivostok, occupying the land as far as Lake Baikal 1,200 miles to the west, and initiating a full-blown colony there, replete with settlers and branches of Mitsubishi and other firms. Japan had been just one of the Allied forces intervening in the newly declared Soviet Union in 1918, but within two years the Western powers had abandoned the effort. The Japanese, however, stayed in Siberia until 1922, and the northern half of Sakhalin Island until 1925. The Russians would not forget this trespass, and the Japanese would continue to see the Soviets as their most dangerous enemy.

Japan, however, was creating enemies of its own throughout Asia and among the Western powers. From its acquisition of Taiwan and several Pacific island chains, Japan moved to colonize Korea in 1910, took over Manchuria (renamed Manchukuo) in 1931, and initiated the second Sino-Japanese War in 1937 (the first having occurred in 1894). Japan had become the major imperial power in Northeast Asia, and it was no surprise that Japan’s claims bordering the Soviet Union and its client state, The People’s Republic of Mongolia, would result in conflict.

The borders between the Japanese puppet state of Manchukuo and its neighbors in the Russian Far East and in Mongolia had been deliberately left vague. And throughout the 1930s, there had been hundreds of minor border clashes between the Japanese Kwantung Army of Manchukuo and the Soviet Far Eastern forces and their Mongolian allies. In spring of 1939, after decades of building its war capacity, the Russians decided to carefully provoke the Japanese who at this point were also deeply involved in the conquest of China.

This time the spark was a detachment of cavalry from the Mongolian People’s Republic—closely allied with the Soviets—to their north. The horsemen either moved east from the border to graze their horses or decided to provoke the Japanese troops—depending upon whose history you read. In any case, they were flagrant enough about it that the Japanese took action and sent their troops beyond the accepted border to teach them a lesson.

That was contrary to what the Japanese general staff in Tokyo had decreed, as they were trying to avoid and serious commitment of troops to their north. But the Kwantung Army had become quasi-independent, as its nationalist officer corps vied for conquest with the larger forces fighting their way through China.

As part of its ideology, the Kwantung leaders, like the rest of the military, believed completely in the power of Yamato-damashii​—Japanese spirit—to propel them to victory in any battle. Because the Japanese were better hand-to-hand fighters and were more unified, they were convinced that they would emerge winners in any engagement with the Soviets.

Unfortunately for the Kwantung Army, the Soviets weren’t overly impressed with Yamato-damashii. Instead, they had set about building numerical and arms superiority in the region with a nationwide industrial push, paid for in large part by starving the civilian sector. The Japanese couldn’t match that. As one Japanese intelligence expert said after the war, “the Russians devoted themselves preponderantly to the build-up of military industry, thereby depressing living standards to a level so appalling that it would have provoked revolution in Japan.”

By mid-1939, the Soviet Army had three times the men as the Japanese and had a 2-1 advantage in aircraft, as well as ground-based guns and armor. The Japanese were well aware of this, but such was their contempt for the Russians—who, after all, had lost the 1905 Russo-Japanese War—that they went ahead with plans to punish the Russians and deter any further encroachments.

The Japanese discounted reports of Soviet strength. “Major General Honma Masaharu, who would become the chief of the Army Intelligence Bureau in 1937, told the Japanese press that the Stalinist purges of army leaders had pushed the Russian army to very near ‘disintegration and destruction,’” writes Alvin Coox in his book on the battle.

The weakness of that argument became evident almost immediately in May 1939 when a 200-man Japanese detachment, pursuing Soviet-Mongolian units, ran into another—and superior—Russian force which wholly obliterated the Japanese. Nevertheless, the Japanese, who felt defeat spiritually unacceptable, doubled down, and when that was stymied, redoubled. By, August the escalation involved an estimated total of 100,000 troops, 600 tanks, and over 1000 aircraft, and the battle became a major chess game directed primarily by Stalin, who had been watching the situation from the beginning. When the Soviets encountered some reverses, Stalin sent General Gyorgi Zhukov to produce some decisive wins.

The Japanese had sound reasons for wanting to create a buffer state between their lucrative territories of Korea, Manchuria, and increasingly, China. But the military high command was divided on how much time and resources to put into pushing back the Russians. According to a 1956 US Army analysis of the conflict, “The Japanese Government desired to localize the affair, but the situation now appeared to have been aggravated by the ‘unilateral and defiant’ action of the Kwantung Amy, elated by its success. Tokyo was worried lest large-scale diversions occur while the Army was tied down in China.”

But as events in Mongolia proceeded, Tokyo no longer had much choice. By September, the Russians had so totally dominated the Kwantung Army that to continue was futile. Japan sued for peace and the Russians accepted. Russia had gambled and won.

There were costs to both sides. The Japanese military claimed 17,000 killed and wounded and the Russians and Mongolians approximately the same, but losses on both sides were probably at least double those figures. Plus, the Russians lost almost twice as many planes and armor as the Japanese, although Russia was reaching the point where those could be replaced quickly.

Nomonhan was the largest land battle since the end of World War I. But in the end, the casualty number wasn’t the important factor—it was the Russian willingness to spend what it took to ensure that there would be no two-front war. Given that it succeeded, the cost was not only bearable, it was downright low. In addition to checkmating the Japanese and dismaying the Germans, Zhukov’s stunning victory may also have cautioned the Turks who, with their massive army, had considered entering the war on the Axis side.

For the Soviets, the win was critical to the country’s survival: Two years later, when the Nazis invaded Russia without warning, the Soviets had not only nullified the Japanese threat, but also had a sizable trained, winter-equipped and battle-ready force in Siberia that they were able to move west to the German front lines. That turned out to be critical in the winter of 1941-42 in the defense of Moscow: Zhukov’s troops were prepared for winter and the invading Germans were not. The Nazis never took Moscow—an early turning point and an absolutely essential component of Russian morale. Shortly after, Zhukov was made Red Army Chief of Staff.

After Nomonhan, Japan agreed to a humiliating treaty that had profound consequences for the outcome of World War II. With Japan historically eyeing Eastern Siberia, a faction within the military had pushed a Strike North policy, aiming for the territory and resources of Eastern Siberia. When that hope came to an inglorious end on the Mongolian grasslands, the other faction, the Strike South group, assumed leadership. The goal then became to seize Southeast Asia and—particularly after the American embargo of 1941—the oilfields of Indonesia.

To do so, however, meant coming up against the British, Dutch, and American colonial forces in the region. Since the most powerful Pacific colonial forces were the Americans—who were closer to their supply bases than the Europeans—the American strategic forces had to be neutralized. The result was the risky attack on Pearl Harbor and the opening up of the disastrous air, sea, and amphibious war with the Americans. So, you might say that the entire Pacific War was unleashed by Zhukov’s predictable, but nonetheless stunning, drubbing of the Japanese forces at Nomonhan.

Today, major empires—Russia, Japan, the United States, and above all, China—are again vying for the riches of Northeast Asia. For many in the United States, this conflict is confusing at best and impenetrable at worst. Even those who follow the news tend to be US-centered, focused on questions like: Is North Korea going to attack the United States? But what’s going on in East Asia isn’t a snapshot of the crisis of the moment. Rather, it’s a sequence in a long-running film that began as early as the eighteenth century.

Familiarity with the Nomonhan Incident won’t instantly reveal the complexity of the struggle for Northeast Asia. But it’s a fascinating place to start.