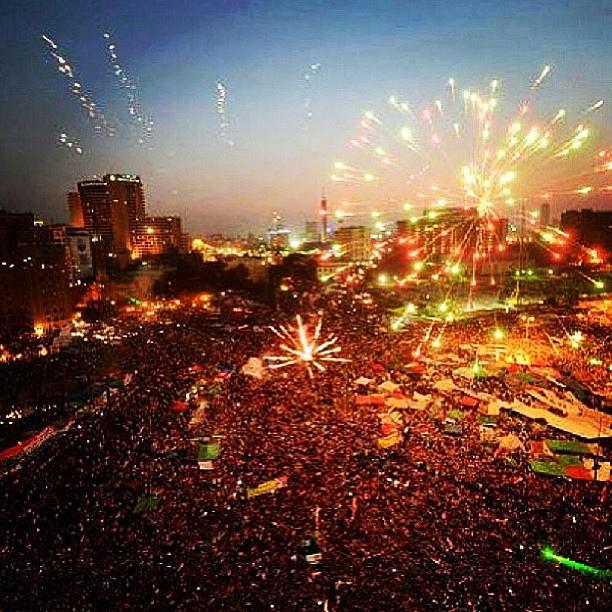 Since the military coup that toppled the country's elected Muslim Brotherhood government, the message of the many Egyptians we met last year resonates with even greater power.
By Bonnie Bricker, Adil E. Shamoo | July 5, 2013 The taxi driver was excited. Driving through the busy streets of Cairo a little more than a year ago, he wanted us to see his most prized token from the revolution that brought Egyptians to the streets in 2011.He passed his cell phone to the back seat to share a YouTube video of his children were singing the Egyptian national anthem—backwards. Backwards, he explained, because that was how former President Hosni Mubarak was ruling the nation. “We want Egypt to be for all Egyptians—Christians, Jews, and Muslims,” he declared, smiling broadly.

Since the popularly backed military coup that toppled the country’s elected Muslim Brotherhood government, the message of the many Egyptians we met last year resonates with even greater power. We had come hoping to listen to these stories of the Arab Spring prior to the upcoming presidential election in 2012, hoping to begin to understand what Egyptians were wishing for at the dawn of their hopeful new democracy. Now we see these conversations as portents of this second revolution, as millions of Egyptians again called for an Egyptian government that would unite all Egyptians with the freedoms sought in 2011.

A young Egyptian student at The American University in Cairo nervously explained her desire to be treated equally in this new society, along with hopes for everyone in her country to be treated fairly, regardless of their cultural background. Her middle-aged professor despaired of the unfair treatment of women, worrying that she might have to leave her beloved country if the situation did not improve. Modestly dressed with a head scarf and well-covered with her long caftan, she was a feminist struggling with unequal pay, and urging freedom and fairness for all Egyptians.

Our Coptic guide to Old Cairo patiently explained the difficult circumstances of the Copts in Egypt. This large minority group, native to Egypt, only wanted what the others asked for as well: fairness in employment, fairness for his family, and fairness for his friends, who greeted him at every corner. Pointing out the well that was purported to be on the site where Moses was found in the river by the Pharaoh’s daughter, he cited the familiar refrain: Egypt is for everyone who lives in Egypt.

Awaiting a cultural heritage performance of music and dance at Wekalet El Ghouri in the center of Cairo, we struck up a conversation with the newly married Egyptian couple beside us. The husband had been a part of the demonstrations in Tahrir Square and was anxiously hoping for the new Egypt to emerge. He was excited to speak to us about his hopes and dreams for his country, graciously asking us to join them for tea after the show. Our conversation ranged over many topics, including their impression of America.

The wife, who had been reticent through most of the discussion, grew bold when sharing her views on the United States. She didn’t like it. Recalling the horrific impression she got from the film American Beauty, she was sure that the amoral acts of the story represented American life. This fear of what freedom might bring along with it was echoed by other Egyptians we met along the way who were less willing to share their thoughts with us, as unknown Americans crossing their path: the driver who favored an Islamic candidate for the stability of the country, the shopkeepers who kept their distance, the pyramid horse cart driver who explained his support for a conservative politician.

We left our tea with the final statements of this young husband echoing in our ears. He was ready, he said, to participate in a new revolution if the impending government continued along the corrupted path of the Mubarak regime. His dreams of a country where people are treated fairly, and where jobs are available to all who are willing to work, were non-negotiable.

While cheering his passion, as two old believers in classic democracy, we tried to convince him that once the election is held, working within the system of a democratic government to institute further changes was the way of a democracy. Our remarks fell on deaf ears; the streets were the instrument of change. We should have heeded the words of this young revolutionary, as they have come to reflect the yearnings of many in Egypt and around the world, from Turkey to Brazil to Greece. The old paradigms are falling. All around the world, freedom is sought and the lights of democracy and fairness are shining through the darkness.

Our driver during the trip captured the sentiment of the impending change of this fundamentally conservative country. “I pray five times a day,” he said, “but some of these Islamist candidates will not be for all Egyptians.” While some Egyptians may be afraid of what a new era will bring, many Egyptians are raising their voices again towards freedom for all. Let us hope that in Egypt, the many voices yearning for a new era of freedom for all of Egypt’s citizens begin to find the freedom and democracy that they seek. For the sake of an inclusive society, let us hope that even those in the fallen Muslim Brotherhood are included in the building of this new government. Let us hope, too, that in this latest transition, the military keeps its promise of a quick transition to a civil, constitutional government.

Egypt’s first try at democratically elected governance was thwarted by power grabs and poor management of this most populous Arab nation. The people we met in Egypt, expressing their most heartfelt desires to strangers, want to work side-by-side with all of their fellow Egyptians in a nation that has always been a leader in the Arab world. They want to work. They want a chance to prosper. They want a future for their children. In this shiningly bright desert country, they are looking for the light that shines on those who live in freedom.

We hope they get it this time.