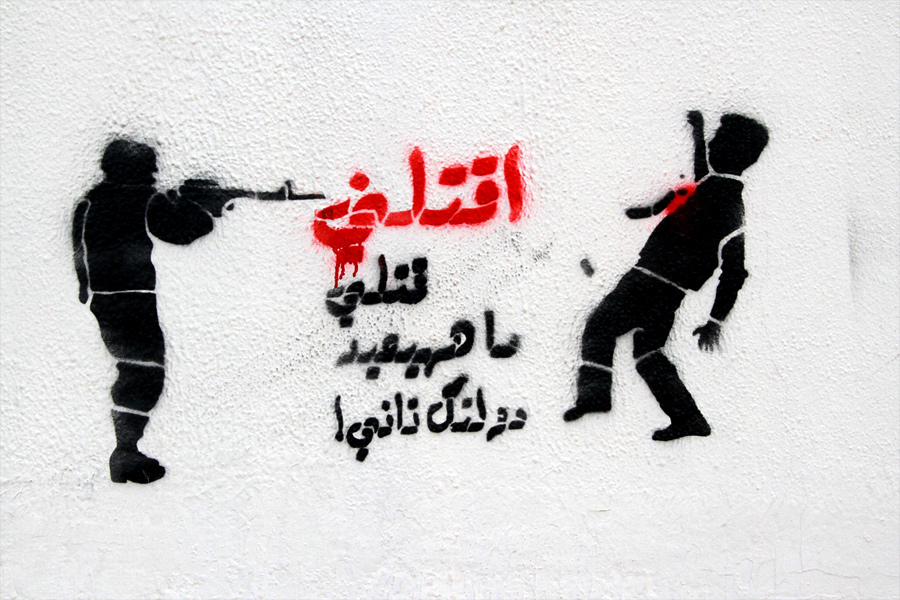 By claiming that the secular pro-democratic left is somehow in cahoots with both of Washington and the Muslim Brotherhood to undermine the nation, the Egyptian military is trying to have it both ways: appealing to the foreign policy establishment in Washington by suppressing both the Islamists and the left, while playing the pseudo-nationalist card for the Egyptian masses. (Photo: Aschevogel / Flickr)

Three years ago, three Arab dictators were ousted in the largely nonviolent uprisings of what has become known as the Arab Spring. In Tunisia, with the adoption of a progressive democratic draft constitution, the future in that country is looking positive. In Yemen, the democratic evolution remains stagnant amid enormous challenges, but there are still signs of hope.

In Egypt, however, autocratic rule has reasserted itself with a vengeance.

Since the military coup in Egypt against the unpopular but democratically elected government of Mohamed Morsi last July, more than 1,000 regime opponents have been killed, thousands more have been hauled before military courts on political charges, and a repressive anti-protest law has been enacted, severely limiting the right of peaceful assembly. The targets of this crackdown have not just been supporters of the ousted Muslim Brotherhood government, but liberal secular activists whose calls for democracy and social justice have put them at odds with both the Islamists and the military leadership.

A new constitution written by military appointees came before voters in mid-January in which the junta claimed a 98-percent vote in favor. However, those campaigning in support of a “No” vote were subjected to beatings and arrest, and only favorable reports on the constitution were allowed in the Egyptian media. The turnout was only 37 percent.

A growing number of prominent trade union activists and human rights supporters have been imprisoned, including Ahmed Maher and Mohamed Adel, who co-founded the secular left-leaning April 6th movement in 2008 and were among the most prominent figures in the nonviolent uprising against Hosni Mubarak three years later. Both have been sentenced to three years in prison.

In addition, 20 Al Jazeera employees, including its bureau chief (a Canadian citizen) and veteran correspondent Peter Greste (an Australian), have been arrested under charges of “assisting a terrorist group” and “fabricating news” amid claims that they had “altered and modified video scenes” showing government repression. In effect, the military government has now criminalized any journalism that doesn’t fit the government’s line. Meanwhile, a growing number of other reporters have been assaulted by pro-regime thugs.

The paranoia of the U.S.-backed regime is remarkable. Authorities have detained a stork that had been fitted by an ornithologist with a tracking device, suspecting it was being used for spying. They’ve investigated a hand puppet from a popular children’s television show on suspicions that it was sending coded messages for oppositionists. Ziad Akl, a political analyst at the Al Ahram Center for Political and Strategic Studies, noted that such behavior reflects “a sentiment of fascist nationalism that you either subscribe to, or face being labeled a traitor.”

In a similar vein, the junta is using government-controlled media to recirculate long-discredited conspiracy theories originally put forward by LaRouchites, paranoid leftists, and libertarian fringe groups claiming that U.S.-based human rights groups, American scholars and independent educational foundations researching strategic nonviolent action, and Serbian veterans of the 2000 pro-democracy struggle against Milosevic, among others, have been conspiring with the U.S. government and Egyptian pro-democracy activists to weaken the nation in the service of Western imperialism.

The articles and broadcasts have falsely accused a wide range of individuals and organizations that struggled against the Mubarak regime of working with Washington on a “new Middle East plan” for U.S. domination. Under such headlines as “April 6th behind an American plan to empower Muslim Brotherhood in Egypt,” the apparent goal of the regime is to discredit the nonviolent resistance utilized by Egyptians so effectively three years ago — and which has challenged military rule subsequently — by insinuating that it was planned, instigated, and funded by the United States.

As part of this effort to blame the United States for homegrown movements, pro-military writer and political analyst Amro Amer asserts in Al-Dostoor that the Egyptian 2011 pro-democracy protests were part of a U.S. government plot “to dismantle the strongest Arabic armies” which began with the invasion of Iraq and later shifted to “nonviolent wars,” mobilizing scholars of strategic nonviolent action like Gene Sharp as part of this master plan.

Indeed, just as the U.S. government during the Cold War claimed that various popular leftist uprisings around the world were actually engineered from Moscow as part of a Soviet “hit list,” the semi-official Al-Ahram newspaper dismisses the idea that “dictators can be overthrown from inside their own countries,” since “the CIA and the American media are the ones who can determine if this dictator is worth being overthrown.” By effectively denying human agency in the struggle for human rights, democracy, and social justice, the U.S.-backed regime can paradoxically claim that the progressive anti-authoritarian activists that brought down Mubarak and are now challenging its own repressive policies are simply U.S. agents.

In short, the military junta, somehow hoping that Egyptians will forget the decades of unconditional U.S. support for Mubarak’s dictatorship and its repression of Islamist dissidents, is now attempting to make the case that the United States actually conspired to overthrow Mubarak and bring the Muslim Brotherhood to power. Indeed, dismissing the indigenous origins of Islamist movements throughout the region, an article in the semi-official newspaper Al-Ahram goes so far as to claim that former President Jimmy Carter’s national security advisor Zbigniew Brzezinski was “the mastermind behind the establishment of Al-Qaida and Hamas.”

While Brzezinski advocated arming some Afghan mujahidin fighters in Afghanistan, there has never been evidence suggesting any contact with Osama bin Laden or Al-Qaeda, must less of his having anything to do with establishing the terrorist group. Similarly, while there was some limited contact by some U.S consular officials during that period with some of the Palestinian Islamists who later formed Hamas, there was neither U.S. support for the group nor any U.S. role in its creation, which has roots in the Egyptian Muslim Brotherhood.

In addition, while it’s true that there was some clandestine U.S. support for the Brotherhood in the 1950s and 1960s — decades after the group was originally established — to counter Egypt’s nationalist leader Gamal Abdel Nasser, the United States has been in steadfast opposition to the country’s Islamists ever since Nasser’s successor, Anwar Sadat, shifted the country to a pro-Western alignment in the 1970s. Indeed, the United States supported the Mubarak regime up to the time of the January 2011 uprising and, much to the frustration of pro-democracy forces, only belatedly and reluctantly encouraged the military to step in and remove the dictator the following month.

The narrow victory by Mohamed Morsi of the Muslim Brotherhood in the 2012 presidential election over the military-backed candidate was a big disappointment to the Obama administration, though it accepted the fact that it had to work with Egypt and — since the Brotherhood’s leadership was dominated by prominent businessmen — recognized that Morsi would not go too far against U.S. economic and strategic interests. Still, there remained major concerns regarding Morsi’s leadership, and the United States largely welcomed the July 2013 coup, despite some finger wagging at the scale of the repression that followed.

Mubarak and his military allies, kept in power for decades in part by over $1.7 billion in annual U.S. military and economic assistance, were seen by many of the leading secular pro-democracy activists as essentially being American puppets. Though there was a conscious effort by organizers of the January 2011 demonstrations to minimize anti-American rhetoric in the protests so as not to bolster U.S. support for the besieged Mubarak regime, strident criticisms of U.S. support for the dictatorship that repressed them and the neoliberal economic policies that impoverished them were evident in Tahrir Square and around the country.

Many of these activists were among the leaders of the nonviolent uprising early last summer against the increasingly autocratic government led by the Muslim Brotherhood, which prompted the coup. As a result, efforts to tie them to Islamists are as bizarre as efforts to tie them to the United States. By claiming that the secular pro-democratic left — which has long opposed the policies of both Washington and the Muslim Brotherhood — is somehow in cahoots with both of them to undermine the nation, the Egyptian military is trying to have it both ways: appealing to the foreign policy establishment in Washington by suppressing both the Islamists and the left, while playing the pseudo-nationalist card for the Egyptian masses.

Ironically, just as the regime’s crackdown was escalating in January, Congress approved an additional $1.5 billion in military assistance to Egypt. Though U.S. law prohibits aid to any regime that overthrows a democratically elected government through a military coup, congressional leaders of both parties inserted language stating that the aid could flow “notwithstanding any provision of law restricting assistance for Egypt.”

The Egyptian military clearly has the upper hand at this time, but its hold on power is ultimately fragile. The younger generation of Egyptians will not likely be satisfied with military rule any more than they were with Mubarak or the Muslim Brotherhood. They recognize that it is the military regime, not themselves, who are receiving the backing of Washington. And they, more than most people living under authoritarianism, know the power of strategic nonviolent action in bringing down an entrenched, repressive, foreign-backed government.