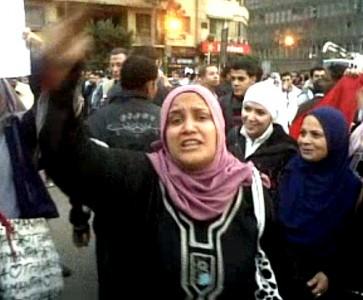 The feminine face of fury has been on display in the public protests in Egypt.
By Beenish Ahmed | February 8, 2011 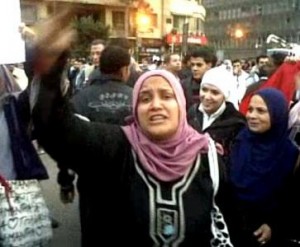 Twitter has been aflutter about the very visible presence of women among the protests that have taken Egypt by storm over the last few weeks. But images of women have remained sparse amid the digital slideshows strung together by major media outlets, which portray mainly dense crowds of the manly. Egyptian Organization for Human Rights activist Ghada Shahbandar estimates that the crowd in downtown Cairo is up to 20 percent female. Others have put the number much higher, at 50 percent.

Some efforts have been made to depict the role of women in this popular uprising. The Global Post put together a slideshow on the Women of Egypt among the March of Millions in Tahrir Square, and a compilation of photographs from various sources can be found on sawt al niswa, a self-described “feminist webspace.” A quick look through these images, which reveal the feminine side of fury, confirms that the issues of unemployment and corruption that are widely cited as the primary causes for this unrest do not affect only men.

Whether their faces are framed by tightly wrapped black scarves pinned neatly to billowing abayas or by an unruly sweep of curls, these women have found the very streets where sexual harassment and relentless stalking once ran rampant suddenly transformed into safe havens, even amid the violence that has broken out. Partly this is because of sheer courage. New York Times columnist Nicholas Kristof wrote recently of his own experiences in Tahrir Square where two bold sisters confronted pro-government thugs, even as male protesters balked before the blades and clubs wielded by Mubarak’s heavies to cut the mass movement down to size.

In another part of the square, a young Egyptian woman in a bright pink headscarf put Nancy Sinatra to shame as she led a call and response that boomed, “What does Mubarak want anyways? All Egyptians to kiss his feet? No Mubarak! We will not! Tomorrow we’ll trample you with our shoes!” And although “the bravest girl in Egypt,” according to the title of the YouTube video of her action, stands out with her brightly colored ensemble and resounding voice, she is not the only girl in Egypt taking a stand against a paternalistic regime in a patriarchal society.

Aside from making a push for political reform, these protests appear to bode well for the future of women within Egyptian civil society. To be sure, it was 27-year-old human resource specialist Esraa Abdel Fattah who was largely credited with organizing the April 6 Movement in 2008. The 70,000-strong strike, which spanned the nation, was catalyzed by textile workers in state-owned factories in El-Mahalla El-Kubra around the issues of low wages and rising food costs. But it was the effective use of social media technologies by Abdel Fattah that grew the movement and earned her the nickname “the Facebook Girl” — as well as three weeks in Cairo’s Al Kanater prison.

Although some might write off their efforts as the exception or else aestheticize them beyond any real import, Egyptian women have decided to take back their streets. They have proven that they are as much a part of the protests as the men who once made them wary to step into public.

Beenish AhmedBeenish Ahmed recently received an MPhil in modern South Asian studies from the University of Cambridge while there as a Fulbright Scholar. She is an award-winning writer, social justice activist, and contributor to Foreign Policy In Focus.