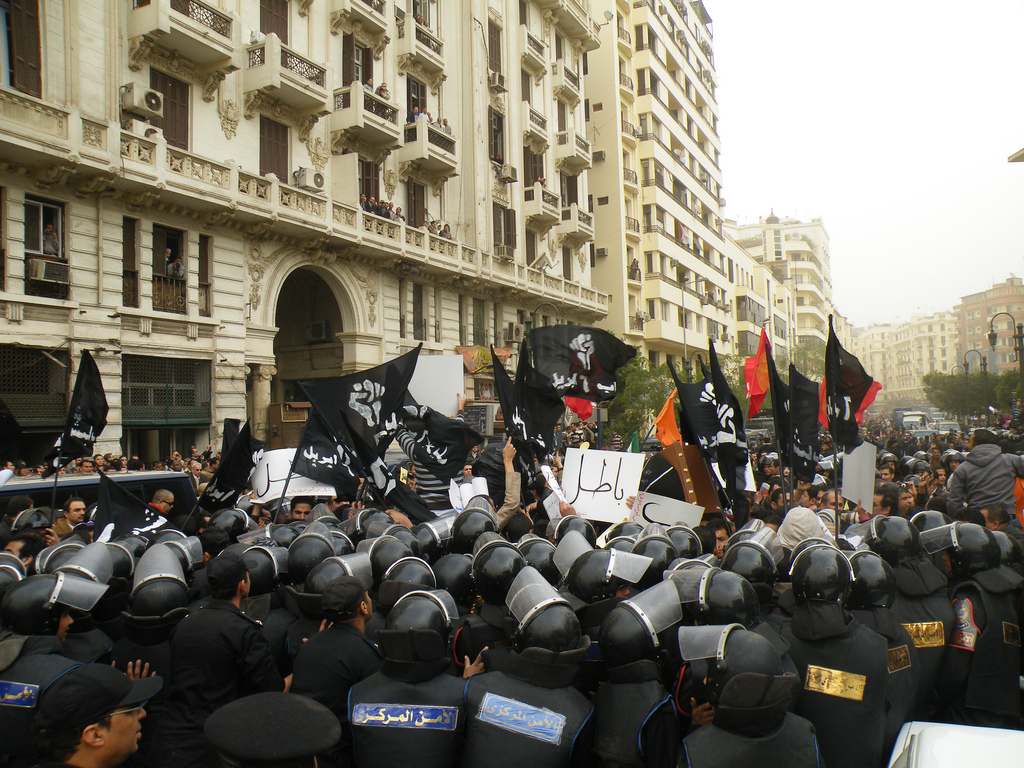 Algeria descended into civil war when its military suppressed the country's democratically popular Islamists. Could the same happen in Egypt?
By Adil E. Shamoo | February 4, 2014

Back in the days of Hosni Mubarak, Egyptian elections were won with an overwhelming majority due to the machinery of state intimidation. Egyptians saw the same tactics used again in the recent constitutional vote.

Egyptians went to the polls in mid-January to approve a constitution drafted by the appointees of the military-backed government, known as the Committee of 50. The 37-percent voter turnout in this last vote was slightly higher than the 33 percent who turned out for the approval of the constitution in 2012. This minority of voters approved the new constitution by 98 percent.

Egypt’s latest constitution has several improvements over the 2012 constitution. The new constitution reduces the role of religion in legislating laws. It prohibits torture and gives women full rights to be protected from all forms of violence. However, the new constitution also makes the military and the police independent of the civilian government — for example, the military budget will have no legislative oversight. And the defense minister must be from the military, though this provision will expire after two presidential terms.

Despite some encouraging constitutional reforms, however, the current military government in Egypt is showing signs that it has no intention of ushering in a new era of democracy. The use of intimidation, such as preventing opponents of the new constitution from campaigning against it, to guarantee near universal support for the new document indicates that the military has little patience for democratic procedures. Instead, the military might be looking for inspiration from other military-led governments in the region.

Tens of millions of Egyptians demanded the military overthrow of Mubarak in 2011. Then, in the 2012 presidential election, a majority of Egyptians voted for the Muslim Brotherhood’s Mohamed Morsi, who edged out a military-backed candidate in the second round of voting. But Morsi’s rule was not to last.

Since he won a free election, Morsi’s unpopularity should not to be compared to Mubarak’s. Still, Morsi proved incompetent, and his popularity rapidly plummeted. Tens of millions of Egyptians returned to the street to demand his removal from office, and the military deposed and imprisoned Morsi last July.

Since then, the military-led government has killed more than a thousand people and arrested thousands of Muslim Brotherhood members on various charges, including staging illegal demonstrations and terrorism. Having declared the Muslim Brotherhood a terrorist organization, the government is confiscating its financial assets and dismantling all of the social services and educational programs associated with the organization. The deposed president Morsi and dozens of other Brotherhood leaders have been charged with espionage and conspiring against the Egyptian state with Islamist groups like Hamas and Hezbollah. These likely trumped-up charges could result in the death penalty for Morsi and his compatriots.

Meanwhile, there is growing unrest. Frequent terrorist attacks, carried out by factions such as Ansar Bayt al-Maqdis and other groups in the Sinai, have left dozens of civilians and security personnel dead. Recently the Islamists even shot down a helicopter. The state repression continues as well — more than 60 Egyptians were killed over two days during the recent anniversary of Egypt’s 2011 revolution.

The Muslim Brotherhood retains considerable support among an estimated one-third of Egyptians. The harsh and brutal techniques used against them, if history is any guide, could backfire on the military. It would not be surprising if splinter groups from Muslim Brotherhood carry out terrorists act against the government. Terrorism could delay Egypt’s moribund economic advancement even further, and the new government will be blamed for all economic ills. As its popularity sinks, the populace will revolt again.

Gen. Abdel Fattah al-Sisi, the leader of the coup last July to remove Morsi from power, has said that in “the military we are as united as one man’s heart, and we adhere to democracy.” Sisi appears to be grooming himself as the savior of Egypt in the way that Gamal Abdel Nasser styled himself in the 1950s. Nasser built a large following and a cult of personality in Egypt and throughout the Arab world.

However, there are two other models — Turkey and Algeria — that Egypt could follow too.

Since Kamal Ataturk founded modern Turkey in 1923, the Turkish military has viewed itself as the ultimate guardian of the republic, retaining influence in all aspects of public life and launching a series of coups in 1971, 1980, and 1997. Many Turkish military leaders were trained in the United States, and Washington has maintained strong ties to the institution.

Since the early 2000s, however, the tide has turned in favor of civilian rule. Taking advantage of an economic crisis in 2002, the religiously conservative Justice and Development Party (AKP) took power under the leadership of Prime Minister Recep Tayyip Erdogan. Erdogan’s government has won three consecutive elections and increasingly marginalized the military as a political actor. Turkey’s democracy is decidedly imperfect, but its democratic institutions are now among the most stable in the region.

In Algeria, the opposite scenario has played out. In 1991, just as the majority of Algerians were about to vote for the Islamic Salvation Front (FIS) to govern the country, the military took power. With a vengeance, the military killed, imprisoned, tortured, and assassinated a large number of FIS leaders and members. Islamist parties formed an underground guerrilla force, and a civil war began. The military fought back the insurgency, but more than 150,000 civilian died during the conflict.

The one positive aspect of what is happening in Egypt is that Tunisia’s rival factions, in part out of fear of what is happening in Cairo, recently came together to form a government to oversee the next free and democratic election. Furthermore, with input from secularists and Islamists alike, Tunisia recently drafted and passed a modern, progressive constitution granting women equal rights with men.

Egypt can still follow the Turkish model — and perhaps now the Tunisian model as well — of a civilian government democratically chosen through free and fair elections. Or it can go down the Algerian path of conflict, killing, imprisonment, assassination, and possibly civil war. The Obama administration should do everything within its power to encourage the first choice, so that Egypt can hold free and fair elections, root out corruption, and improve the economy.

Adil E. Shamoo is an associate fellow of the Institute for Policy Studies, a senior analyst for Foreign Policy In Focus, and the author of Equal Worth — When Humanity Will Have Peace. His email is ashamoo@som.umaryland.edu.