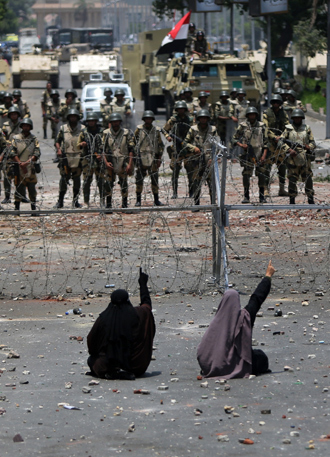 Though the Egyptian military is painting itself as a guardian of stability and democracy, there is ample reason to believe it will bring neither.
By Ben Luongo | July 10, 2013 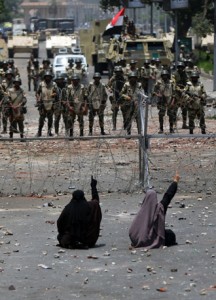 Following the Egyptian military’s ousting of the democratically elected President Mohamed Morsi, public officials and media personalities have debated whether or not to call the recent upheaval a coup.

Supporters of the action see the military’s removal of the president as a legitimate act, citing either Morsi’s widespread unpopularity or the military’s popular support. For instance, Mohamed Tawfik, the Egyptian ambassador to the United States, said on ABC’s This Week that “Egypt has not undergone a military coup, and it is certainly not run by the military.” Nabil Fahmy, the former U.S. ambassador to Egypt, argued on NBC’s Meet the Press that the military “did oust the president, that’s true, but then they handed over government immediately to the interim president. So, the fact that they seized power or wanted to seize power is, frankly, incorrect.”

Some commentators even praise the Egyptian military as guardians of stability. Michigan Republican Mike Rogers, chairman of the House Intelligence Committee, said on CNN that the military is “the one stabilizing force in Egypt that I think can temper down the political feuding that you’re seeing going on now, and then help a process that will allow for multiple factions of parties and beliefs to participate.”

In general, those unwilling to call the military’s actions a coup claim that its actions express the popular will of Egyptians. They also claim that Morsi’s removal is further legitimated by the military’s promise to “correct” the direction of the revolution and hold elections, which are outlined in the military’s “roadmap” proposed on July 3rd. The roadmap also aims at implementing a media code of ethics to ensure freedom of the press as well as measures the executive can take to ensure the involvement of Egypt’s youth in the institutions of the state.

While this all sounds good on paper, there is a danger in placing too much confidence in the military’s ability to set the direction for revolution and restore democracy.

First, promoting democracy is a project that runs counter to the very manner in which the military operates. Because its structure is inherently hierarchal and authoritarian, its decision-making is completely insulated from democratic accountability. This fact is especially salient after the military unilaterally dissolved Egypt’s constitution following the ousting of its democratically elected president. Additionally, the military replaced Morsi with Adly Mansour, the chief justice of the Constitutional Court who was originally appointed to the judiciary by the deposed dictator Hosni Mubarak. While Mansour may provide a presidential façade, it’s likely he will simply carry out the military’s orders with little debate.

This also makes it unlikely that the military will allow open access to its political rivals when—or if—it holds democratic elections. The military has obvious political interests and has no problems making them public. Such a politically interested institution is unlikely to ensure the integrity of Egypt’s elections, and political rivals know this. These kinds of developments only radicalize political opposition groups, which will further destabilize Egypt rather than put it on the right track.

Third, the military has political interests which do not align with the general will of the people. In fact, the military is an arm of Egypt’s “deep government,” a complex of institutions that underpinned Mubarak’s 30-year old regime—including the judiciary and the media—which Morsi never fully dissolved. Because of this, the military will always back those friendly to the deposed Mubarak regime who have also been stridently against Morsi. Additionally, the military has financial interests tied to Washington which are likely to complicate their ties to the Egyptian people. The United States, which was also friendly to Mubarak and skeptical of Morsi, provides the Egyptian military with about $1.5 billion annually. This does not include the non-financial support that the United States provides, including personnel, technology, and information.

All of this makes it very hard to trust the military’s roadmap as a viable course for Egypt’s revolution. In fact, those who applaud the military’s removal of Morsi as an expression of the general will ignore the fact that the military feared that Morsi was plotting to use them to attack the Assad government in Syria. Within this context, the roadmap actually serves to cloak the military’s foreign policy interests within a veneer of restoring democracy. Though the military is painting itself as the guardian of stability, there are plenty of reasons to believe that Egypt will further destabilize under its military’s control.

Ben Luongo is currently a doctoral student at University of South Florida’s Department of Government and International Affairs. He has taught international relations at St. Petersburg College in Clearwater Florida. He has also coordinated several campaigns with groups like the Human Rights Campaign and Save the Children.