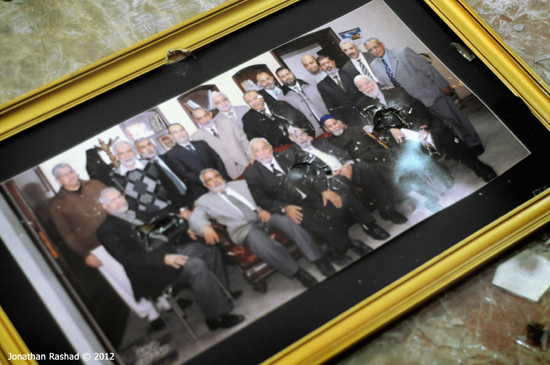 If Muslim Brotherhood leaders think that this crisis is similar to others in their troubled history, they are badly mistaken.
By Michael Gasper, Mohamed Yousry | August 19, 2013

In the immediate aftermath of the coup that deposed Egyptian President Mohamed Morsi, it looked as though the Muslim Brothers had decided to embrace all options, including violence, to regain their footing and demand Morsi’s reinstatement. In the heat of the moment, some Brotherhood members and their supporters waved flags associated with militant Islamist groups, such as al-Qaeda, and issued rampant threats against the deposed president’s opponents.

After a quick recalibration, however, the Brothers wrapped themselves in Egyptian flags and brought women and children with them to demonstrations, proclaiming that their resistance to the military-backed government would be non-violent.

To many, this seemed to be a welcome departure for the group, which did not shy away from espousing violence through much of its earlier history. However, a closer look at the Brothers’ strategy offers insight into the extent that the group’s past continues to weigh heavily on its decision-making in the present. The group’s history is a burden that severely handicaps its ability to reach a political settlement that would secure a legal place for the movement in Egypt’s political future.

Indeed, the parallels between the past and the present are striking. For example, as they have often done, the Brothers fundamentally overestimated their support among the general population while underestimating the strength of their opponents.

In 1953, Brotherhood luminaries Sayyid Qutb and Hassan al-Hudaybi confidently declared that the Brothers would destroy their opponents (in this case the Free Officers, the military regime that had ousted the monarchy in 1952). There are echoes of this now, as many leaders of today’s Brothers confidently declared their ability to defeat the opposition and to reinstate Morsi within a few short days. In both instances the Brothers seem oblivious to the range of forces arrayed in support of the new regime.

This inability to grasp the political significance of the moment might be traced to a second factor that has marked the Brothers’ self-perception since they became a significant player in Egyptian politics in the 1930s. The group continues to present its discourse as synonymous with Islam and as such distances itself from any other political movement or trend. Brotherhood rhetoricians portray their political struggle not as competition for political power but as martyrdom in the service of God.

This is not new. In 1965, Qutb and those in his immediate circle declared themselves al-‘Usba al-Mu’minah, or the “Faithful Core.” This reflected their view of the 1960s as a battle against the “infidel” regime of President Nasser, whom they saw as a lackey of the West conspiring with the Jews and the Soviet Union to destroy Islam. Similarly, we now hear echoes of this dusty rhetoric from many Brothers who stridently assert that their group represents the only vision of Islam writ large. To them, their enemies are criminals determined to extinguish God’s light on earth.

Similarly, the Brothers continue to depict themselves as victims protected by angels facing off against non-believers. Longtime Brotherhood activist Zayneb al-Ghazali claimed that while she was imprisoned in the 1960s, God’s angels appeared in her cell to feed, clothe, and protect her. In recent weeks, a number of Brotherhood speakers have claimed to have seen the angel Gabriel at their encampment in Rab’a al-‘Adawiyya that was so brutally attacked on the morning of August 14, 2013.

A few have gone so far as to claim that they have received divine visions of the Prophet of Islam requesting that Morsi lead him in prayers. In fact, even during Morsi’s presidency, the Islamist writer Fahmy Howeidy characterized Morsi’s opponents as Pharaohs and non-believers, and the Brothers and President Morsi as Moses and his Godly people.

And finally, some Brotherhood rhetoricians continue to do what they do best: muddy the facts. For example, ‘Umar al-Tilmissani, a former head of the Brothers, declared that the movement’s founder, Hassan al-Banna, was the true initiator and the real architect of the 1952 coup that toppled Egypt’s monarchy and brought Nasser to power. This complete rewriting of reality is parallel to the current leadership’s claims that not only did Morsi challenge U.S.-Israeli hegemony in the region (a powerful populist position that is not supported by facts) but also that he had agreed to hold early presidential elections after the military’s ultimatum of June 30, 2013. Again this is not supported by facts. Moreover, the Brothers also continue to argue that the deposed president included the opposition in all his decision-making processes. Regardless of one’s view of the military coup, no serious observer could reasonably assert that Morsi’s government was inclusive.

If history is any indication, these delusions of grandeur will serve the Brotherhood poorly.

One need look no further than their 1954 misreading of the political situation that led to Nasser detaining thousands of Brotherhood members. Eventually, more than 1,500 were sentenced to long prison terms and six were hanged. This inability to fully grasp the limits of their power greatly weakened the movement at a time when it was facing increasing repression from the Egyptian state. The frightful violence recently perpetrated by security forces against Brotherhood sit-ins may serve as a new analog to this theme.

With all of this in their history it is perplexing that the current leadership has not learned from the past. Even more inexplicable is that despite the caution from a prominent and ardent supporter, Salafi preacher Hazem Salah Abu Ismael, that the Brothers had lost much of their ability to mobilize the masses, they still don’t have a realistic view of the present. Indeed it is quite clear that their support, even among Islamists, is dwindling, and their popularity among ordinary citizens is very low. This explains at least in part the so far muted response among Egyptians about the violence of August 14.

No one can question the fact that the Brothers enjoy enthusiastic support from their followers and are a disciplined and organized force. But facts on the ground indicate that the movement’s current strategy—its attempt to mobilize the “street” against the military-backed government—has not worked. The Brothers have organized numerous marches in an effort to attract others to join them, but so far they’ve failed to attract support from outside their ranks. In the run-up to the military’s brutal assault on its sit-in encampments, ordinary citizens seemed to grow impatient towards what they saw as the Brotherhood’s disruptive tactics. Even now, despite hundreds of fatalities among Brotherhood supporters, there seems to be scant evidence of sympathy for the movement.

One incident sums up much of the sentiment on the street. On July 9, under the leadership of longtime Brotherhood activist Mohammed Abdel Qudus, a handful of Brothers attempted to organize a protest against the death of the Brother’s photographer, who was killed during the first massacre perpetrated by the Egyptian army in the wake of the July 3rd coup. Almost instantaneously, dozens of ordinary Egyptians harangued them, calling them traitors and in turn blaming the Brothers for the events at the Republican Guards Club that resulted in the deaths of 51 people. One wonders if the same will now happen on an even larger scale after the violence of August 14.

While some ill will may be inherited from the Mubarak era, much of the anti-Brotherhood sentiment can be traced to its divisive tactics during Morsi’s unsuccessful year in power. Instead of offering immediate plans to ease the sufferings of Egypt’s poor or its struggling middle class, the Brothers engaged in what many believed to be avoidable battles with Egypt’s entrenched institutions (such as the judiciary and the media) and with secular forces and minorities. While the Brothers claimed these battles were aimed at fighting corruption, many ordinary Egyptians perceived them as an effort to assure the Brothers’ control over every aspect of state and society.

The massive anti-Brotherhood demonstrations of June 30 and July 26 indicate that many Egyptians pin the Brotherhood’s failure on its archaic ideology, outdated policies, and seeming lack of interest in social and economic justice. And in the wake of a particularly virulent anti-Brotherhood media campaign by state outlets, many Egyptians are now questioning the group’s loyalty to Egypt. According to this view, the Brothers only consider Egypt a stepping-stone towards the establishment of a new Muslim Caliphate in the broader Middle East.

The leaders of the Muslim Brothers have a choice: continue on the same path as they have throughout their history, or initiate painful but necessary reforms to begin a new future within Egypt’s diverse political landscape. Unfortunately, early indications are that powerful voices from the Brothers’ past will prevail—take Shaykh Yusuf al-Qaradawi, the influential Qatar-based Egyptian cleric who recently called on Muslims from every part of the Arab and Muslim world to join the struggle of the Muslim Brothers in Egypt in order to obtain martyrdom, for example.

Still, what might reform look like? There may already be some indications. Youth-led Brotherhood factions like the Ikhwan Bila ‘Unf (Brothers Without Violence), Shabab al-Ikhwan (Youth of The Brotherhood), and Ahrar al-Ikhwan (The Free Brothers) are calling for a comprehensive review of the movement’s ideas and practices. These young activists appear to have realized that the Brothers’ old strategies are outmoded and belong to a different era. Some leftist and liberal activists are calling upon the Brotherhood leadership to join with their younger members and to abandon the discordant ways of their puritanical past in order to secure a place in Egypt’s future.

The Brothers must recognize that their old ideas are not suitable for today’s diverse political landscape. They must acknowledge that for any Islamist (or indeed any other) political project to succeed it must be inclusive—Christians, Jews, Shi’a, and other minorities must be treated equally under the law. The movement must abandon the notion that it represents God’s faithful core and disavow secrecy, deception, and violence. It must also entertain the possibility, however unjust it may seem in light of current circumstances, that Brotherhood leaders were deposed and imprisoned precisely because of their intolerance and their past tendency to express this intolerance with acts of violence.

Yet even if the movement adapts all of these changes, it still might not be enough to ensure a place for the Brothers as a legal political force in Egypt’s future. Many liberal and leftist activists are demanding the dismantling of the Brothers’ Freedom and Justice Party (and all other religious parties for that matter). This position seems to be gaining popular momentum.

To avoid further marginalization, the Brotherhood’s leaders must agree to join the current political process or risk returning to the margins as an underground group. Most importantly, if the Brothers think that this crisis is similar to others in their troubled history, they are badly mistaken. This time is different. The movement is not only facing the wrath of a military regime; it is also facing the anger and distrust of a large segment of the population. For the Brothers to have any voice in Egypt’s political future, the movement must abandon its past and look for a new path forward before its too late.

Michael Gasper is an Assistant Professor of Middle Eastern History at Occidental College in Los Angeles. He is the author of The Power of Representation: Peasants, Publics and Islam in Egypt.

Mohamed Yousry is a former expert witness and interpreter for Shaykh ‘Umar Abdel Rahman’s defense team. He is currently a PhD candidate in the Department of Middle Eastern and Islamic Studies at New York University and is writing his dissertation on the Islamist politics in Egypt from the 1950s to the present.