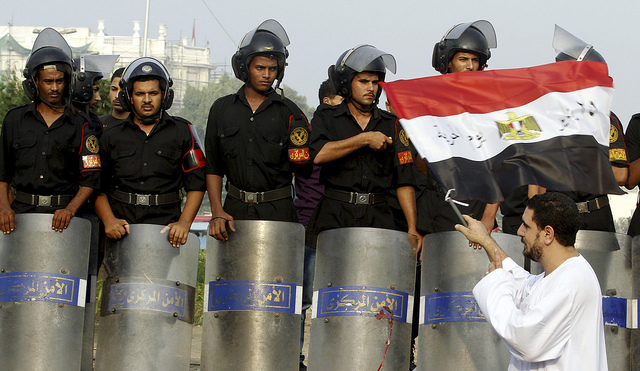 Washington should refrain from its interventionist instincts and acknowledge that this is a fight for Egyptians.
By Adil E. Shamoo, Bonnie Bricker | August 19, 2013

Egyptians continue to find themselves in the throes of a revolution that began in January of 2011. Rarely are these easy periods for any nation, but now the darkness of oppression has brought the worst upon the people of Egypt.

The recently deposed President Mohamed Morsi came to power last year after winning a run-off election against Ahmed Shafiq, a former air force commander appointed prime minister by Hosni Mubarak shortly before the former dictator’s fall in 2009. Though his victory was narrow, Morsi enjoyed considerable support from liberal forces eager to avoid putting an old Mubarak hand in the presidency.

Scarcely a year later, millions rallied for Morsi’s removal, and his rivals in the military were only too happy to oblige. Hundreds of lives have since been lost as the military has turned its guns on Islamist protesters demanding Morsi’s reinstatement.

During Morsi’s rule, the Muslim Brotherhood—tasting power for the first time after long decades of repression—attempted to consolidate its power far beyond what it had promised before the presidential election. The Brotherhood unilaterally rammed through an Islamist-tinged constitution and ignored the judiciary, making a mockery of the inclusive sentiments it expressed in the run-up to the election.

The Muslim Brotherhood did not restrict its heavy-handedness to government institutions, but also sought to impose new and more restrictive social rules upon all Egyptians. Efforts to suffocate the revolutionary dreams of many educated Egyptians for a more inclusive and just society exploded under Morsi. The Brotherhood increased its repression further by using its newfound power to discriminate against Egypt’s sizable Coptic Christian minority. Street thugs attacked Copts and many churches were burned, with such attacks becoming increasingly common in the unrest since the July 3 coup. These actions are anathema to the majority of Egyptians.

On top of this social discord, the economy, already in the doldrums, took a sharp downward turn under Morsi. Youth unemployment has lingered in the 40-percent range for 20-to-24 year-olds, with no hope for improvement in sight. Morsi’s leadership failed to give Egypt’s restive majority any hope for the future.

Despite its bungled tenure, the Brotherhood’s leaders seem to think demonstrations and sit-ins will bring their power back. They forget that the majority of Egyptians have aligned themselves with the military and are determined to resist any power that reigns as absolute—a warning the military itself would be keen to heed.

Many Egyptians would, however, be amenable to a power-sharing agreement among the Brotherhood, the military, and more liberal secular forces. Despite widespread disenchantment with the Brotherhood, the organization retains considerable support from its long years—stretching back to 1928!—of providing social services and mobilizing Egypt’s Islamists. No crackdown can sweep this constituency away, so the military and its secular backers cannot hope to govern without them.

The military’s bloody crackdown on the Brotherhood is not only immoral; it is also counter-productive. The rights of Islamists must be protected along with those of other factions, and all efforts must be made to include them in the system. Patience and negotiation could have minimized the numbers of Morsi supporters in the streets and increased support from those in the middle who are sympathetic to the Brotherhood but also hopeful for a compromise. Instead the military opted for mass killings and arrests, playing directly into the hands of extremists.

A new period of emergency rule, along with the interim government’s appointment of 19 generals as governors of Egypt’s provinces, is an ominous sign of a military dictatorship. In protest of the slaughter of Islamist civilians and the coup government’s newly claimed emergency powers, Mohamed ElBaradei—an internationally respected Nobel Laureate and the recently appointed vice president for foreign affairs—resigned his position. His explanation bore the mark of an Egyptian ready to turn the page on the next chapter of the revolution. Stating a case for a more peaceful path, he lamented, “I cannot bear the responsibility for one drop of blood.”

Watching these events unfold from thousands of miles away, Americans are responding as we often do, trying to determine how we can influence the outcome. President Barack Obama has suspended the joint military exercises that had been scheduled to take place next month. Many have also suggested that the annual $1.3 billion that the Egyptian military is scheduled to receive from Washington also be suspended. Alternately, maybe it’s time to turn the page and use that money for jobs for Egyptians instead of weapons for their military.

Or maybe we should just refrain from our interventionist instincts altogether and acknowledge that this is a fight for Egyptians navigating an unfamiliar path. Anti-Americanism can be used to fuel the fight for either side, and there is no reason to add more energy to that growing fire. Instead, we should continue to support all efforts from either side towards reconciliation. Like ElBaradei, we cannot bear the responsibility of blood spilled as the result of our actions.