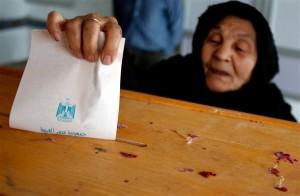 Egypt's presidential election ought to be celebrated as a great success for the forces of democracy in Egypt and the Arab world.
By Bonnie Bricker, Adil E. Shamoo | May 30, 2012

This May, for the first time in their history, Egyptians voted for president in a largely free and fair election. For the second time in less than a year, a new democratic regime is emerging from the outgrowth of the Arab Awakening.

In the final results tallied by the Egyptian election commission, the three candidates with the highest votes were Mohamed Morsi, the Muslim Brotherhood’s candidate, with 25 percent; Ahmed Shafiq, the SCAF-supported former air force general and the last prime minister under Mubarak, with 24 percent; and the Socialist-Nasserist Hamdeen Sabahi, with 21 percent. Sabahi’s respectable showing is even more striking considering that liberal votes were also scattered among three other candidates.

Faced with 13 contenders representing a broad swath of the political spectrum, then, 65 percent of Egyptian voters cast their ballots to repudiate the old regime and its remnants. Moreover, 40 percent voted for a secular president. This new chapter in the history of this ancient civilization has been full of disappointment and distress, but these results ought to be celebrated as a great success for the forces of democracy in Egypt and the Arab world.

This first presidential election was not without controversy.

Egypt’s Supreme Council of Armed Forces (SCAF) — the country’s governing body of military leaders — meddled too much in the election process, as well as in the politics of the various parties. The Mubarak-era election commission, in conjunction with SCAF, disqualified several candidates and then qualified one of them again, casting a shadow on the process.

Sabahi is crying foul over votes allegedly cast by soldiers and police, who are supposed to be forbidden from voting but may have provided extra support to Ahmed Shafiq. Morsi, who secured the highest number of votes, was in fact a substitute for the original candidate of the Muslim Brotherhood, Khairat El-Shater, who was disqualified by SCAF because he had recently been imprisoned by the Mubarak regime.

A fourth major candidate, Amr Moussa, obtained just 11 percent of the votes, although the Western press had often bestowed front-runner status on his candidacy. Well-known in the West as the former head of the Arab League and a former foreign minister (a decade ago) in Mubarak’s government, Moussa ran on a platform of a secular and inclusive approach to Egypt’s governance, a position we heard expressed by Egyptians on our recent trip. His former ties to the Mubarak regime and his associations with Western governments created suspicion, however, damaging his candidacy.

These various controversies are to be expected in a first-time election. Even former President Jimmy Carter noted that although there are concerns regarding the voting process and the monitoring of the election, the irregularities were not large enough to cast doubt on the outcome as a whole.

A New Forum for an Old Battle

The upcoming run-off is a contest between the remnants of the Mubarak regime and the Islamist Muslim Brotherhood, continuing a struggle now waged for more than 60 years. The old regime is associated with a vast security apparatus and its dictatorial, corrupt, and abusive tactics, along with its concentration of wealth among a small number of well-connected and influential families. On the other side, the Muslim Brotherhood promotes social justice, using Islamic principles to guide governance. Under the Muslim Brotherhood, however, women and minority rights could be curtailed, and democratic principles may not be fully applied.

Both candidates have moved quickly to moderate their positions. Morsi keeps assuring everyone that women and minorities will be respected while underscoring his plan to govern on democratic principles in an attempt to garner the support of liberals. Shafiq is emphasizing his respect for the principles of the revolution, in contrast to his law-and-order rhetoric from the campaign, during which endorsed the use of force against demonstrators in Tahrir Square.

During our recent visit to Cairo, anti-Americanism and suspicion of U.S. policies and intentions toward Egypt were evident. The prevailing attitude among Egyptians derives, in part, from the longtime U.S. support for Mubarak’s regime, which continued through the early part of the revolution. In addition, Egyptians resent America’s unqualified support for Israel regardless of its inhumane treatment of the Palestinians. Egyptians fear that the Obama administration secretly supports SCAF and its candidate Shafiq, viewing him as the most likely to maintain order and the peace treaty with Israel. With these beliefs strongly held by the Egyptian public, it would behoove the United States to stay out of the run-off election and solely support a free and fair process.

The election results so far are a testament to the people of Egypt and the strength of secular democratic forces. The Muslim Brotherhood and Morsi would serve Egypt better by declaring unqualified support for the democratic process and giving up their archaic views toward women and minorities. In so doing, they could form a coalition with liberal forces, score a lasting victory against the remnants of Mubarak’s regime, and help Egypt to march down a path to democracy.

Bonnie Bricker, Adil E. ShamooAdil E. Shamoo is an associate fellow of the Institute for Policy Studies, a senior analyst for Foreign Policy in Focus, and the author of Equal Worth – When Humanity Will Have Peace. He can be reached at ashamoo@som.umaryland.edu. FPIF contributor Bonnie Bricker writes occasionally on issues of public and social policy.