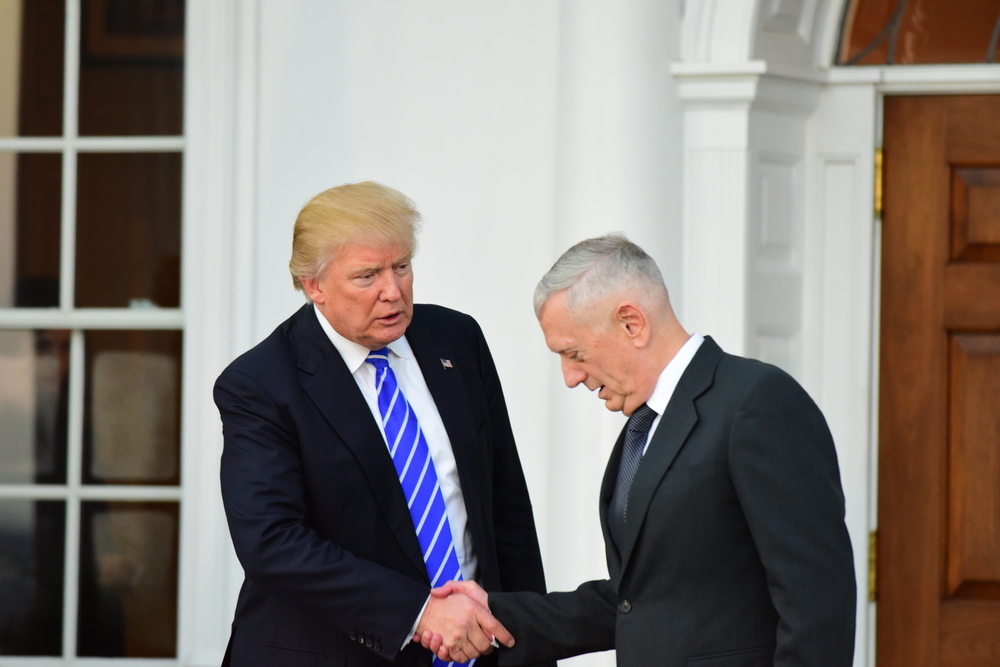 Many of the establishment figures now turning on Trump have blood on their hands. But that's the point.
By John Feffer | June 10, 2020

A child exposing the nakedness of the emperor by speaking truth to power?

More than half of the United States — not just liberals and the left but also the mainstream media and some Republicans — has been shouting at Emperor Trump for months on end that he has no clothes. These declarations have fallen on deaf ears, for Donald Trump is constitutionally incapable of acknowledging his own flaws.

Also, there are still plenty of people telling Trump what he wants to hear. The president is surrounded by family members, advisors, and careerists who have refused to acknowledge the simple truth that the White House has been occupied for more than three years by a person that former Secretary of State Rex Tillerson once called King Moron (oops, I misquote: he actually said a “f**king moron”).

In the last week, however, this picture has begun to change. Three important clothiers of the president have said that maybe the commander-in-chief has been experiencing a wardrobe malfunction all along.

Twitter, Justin Trudeau, and James Mattis all took their turns in the spotlight recently to challenge the American president. Representing three important constituencies — social media, the Pentagon, and the international community — all three in their own way have chipped away at Trump’s power.

True, they have all provided important cover for the naked leader in the past. Also, their statements could have been clearer calls to arms. But now, all three can help precipitate the “run for the exit” moment that will spell Trump’s downfall.

We’ll have to wait until November to be sure, but the president might have effectively lost his reelection bid this month, well before Election Day.

Donald Trump once wooed the mainstream media. He chatted up gossip columnists. He pretended over the phone that he was his own publicist, singing the praises of his boss. He so desperately wanted to be on the cover of Time that he created dummy versions of the magazine proclaiming that “Trump is hitting on all fronts” and hung them in at least five of his golf clubs. Throughout, he groused that the media was not sufficiently flattering.

Twitter provided Trump with the ideal solution to his chronic need for attention. He no longer had to rely on the media and instead could communicate directly to his followers. He could simultaneously disparage the mainstream media as “fake news” and dispense his own fake news by tweet.

In the first three years of his presidency, Trump fired off more than 11,000 tweets. Many of them were rambling attacks on his opponents (somehow Trump manages to be rambling in under 280 characters). But some of them were actual policy announcements or served some other tactical purpose.

According to this New York Times analysis of this incessant Twitterstorm:

Early on, top aides wanted to restrain the president’s Twitter habit, even considering asking the company to impose a 15-minute delay on Mr. Trump’s messages. But 11,390 presidential tweets later, many administration officials and lawmakers embrace his Twitter obsession, flocking to his social media chief with suggestions. Policy meetings are hijacked when Mr. Trump gets an idea for a tweet, drawing in cabinet members and others for wordsmithing. And as a president often at war with his own bureaucracy, he deploys Twitter to break through logjams, overrule, or humiliate recalcitrant advisers and pre-empt his staff.

Although the social media giant has had no problem deleting praise for the Islamic State, it hasn’t shown comparable due diligence toward white nationalism. According to an account of a discussion at a Twitter staff meeting, a technical employee explained that “on a technical level, content from Republican politicians could get swept up by algorithms aggressively removing white supremacist material. Banning politicians wouldn’t be accepted by society as a trade-off for flagging all of the white supremacist propaganda.”

With the compliance of social media platforms, Trump and his coterie of Republican extremists have helped to mainstream otherwise marginal content.

But that tide might be turning. At the end of May, Twitter took the unprecedented step of labeling two of Trump’s tweets, directing readers to accurate sources of information on mail-in balloting and announcing that Trump had violated its policies on glorifying violence. Then, last week, Twitter took down an account that retweeted all of Trump’s utterances, again for violating its policies.

Trump, predictably, went ballistic. He lashed out on Twitter (the man is impervious to irony). He retaliated with an executive order to lift some of the liability protections on social media companies.

It’s not as if Trump is going to abandon his principle mode of communication. This last weekend, after all, he broke his own Twitter record by sending out 200 Tweets in a 24-hour period, including 74 in one hour. By increasing the outflow of his firehose, Trump seems to be daring Twitter to keep up with its labels.

Twitter hasn’t deplatformed Trump, as it has some other darlings of the alt-right. It let slide Trump’s latest Twitter outrage — promoting a conspiracy theory about a Buffalo protestor injured by the police — because the use of a question mark marked it as “speculative” (Really? Really??).

But with its labels, Twitter is finally saying that no one is above the law — the admittedly loose laws of the internet — not even the president of the United States.

In the United States, we are still talking about the 8 minutes and 46 seconds that a cop knelt on George Floyd’s neck, killing him.

In Canada, they’re talking about 21 seconds.

That’s the pause that Prime Minister Justin Trudeau took to answer a question on Trump’s threat to use the military against those protesting Floyd’s death. Trudeau could have used that time to criticize Trump directly. Instead, after his long pause, he chose to speak of the problems facing people of color in his own country. “There is systemic racism in Canada,” he said.

Trump has never hesitated to lambaste other heads of state. He called Trudeau “two-faced” as well as “very dishonest and weak.” He labeled comments by Emanuel Macron “very, very nasty.” He criticized comments of Danish Prime Minister Mette Frederiksen as “nasty and inappropriate.” With comments about friends like these, you can imagine how Trump tongue-lashes his enemies.

For the most part, the international community has quietly tolerated Trump. They’ve delivered tersely worded rebuttals. They’ve made fun of him behind his back. But they haven’t directly or personally criticized him.

Given the power of the United States, it’s unlikely that the leader of an allied country will take the president to task. So, perhaps the best we can hope for is 21 seconds of silence, during which the rest of us can voice the thoughts we think are going through Justin Trudeau’s mind.

Maybe it’s because I worked for a Quaker organization for many years, but I think that sometimes silence can speak volumes.

Former Pentagon chief Jim “Mad Dog” Mattis was one of the more prominent “adults in the room” who were supposed to rein in Trump. He failed. He resigned in December 2018 after disagreeing with Trump’s push to withdraw U.S. troops from Syria. When he resigned and later when he published his memoir the following year, Mattis kept his thoughts on Trump to himself.

Last week, Mattis broke his silence with a remarkable statement in The Atlantic criticizing the president’s threatened use of the military against protesters. He said, in part:

In all my years as a protester, I have never witnessed someone of Mattis’s background and standing actually side with folks on the street. “The protests are defined by tens of thousands of people of conscience who are insisting that we live up to our values — our values as people and our values as a nation,” he said.

It wasn’t just Mattis. Former chair of the joint chiefs of staff Mike Mullen wrote a similar condemnation of Trump as did former commander of U.S. forces in Afghanistan John Allen. It was the journalistic equivalent of D-Day, with the generals landing their forces on Omaha Beach in the hopes of dethroning their adversary several months hence.

Yes, yes, I know: Mattis, Mullen, and Allen are no leftists. You can’t even call them liberals or moderates. Andy Kroll is right to point out in Rolling Stone that these are “the same military leaders who endorsed and defended a policy of forever war that has led to tens of thousands of American deaths, hundreds of thousands of dead Iraqis and Afghans and Syrians and Yemenis and Pakistanis, hundreds of thousands of injuries physical and mental suffered by U.S. service members, and many billions of taxpayer dollars poured into endless conflict.”

Kroll is both right and spectacularly off the mark. After all, Donald Trump similarly dismissed Colin Powell’s endorsement of Joe Biden by linking him to America’s failed wars.

The fact that these old establishment figures have blood on their hands is precisely the point. Noam Chomsky denouncing Donald Trump is not news. Everyone expects the leaders of the #BlackLivesMatter movement to criticize the president. I’ve been slamming Trump from day one of his presidency (and many months before), but I doubt my preaching goes very far beyond the choir.

All the attacks on Trump from left and center are what journalists call “dog bites man.” It’s no surprise. But “Mad Dog bites man”? That’s a different story altogether.

The military has been the most trusted institution in U.S. society for decades. According to Gallup, it enjoyed a 73 percent approval rating in 2019 — compared to 38 percent for both the presidency and the Supreme Court, 36 percent for organized religion, and 11 percent for Congress.

People listen to the military. And by people, here I mean folks who voted for Donald Trump, continue to support the president, and are still thinking about voting for him in November.

As importantly, these generals are willing to take enemy fire — from Fox News, from crazy Internet trolls, from the president himself—so that other former Trump enablers might be more willing to stand up and speak their minds.

Immediately after Mattis waded into the debate, Senator Lisa Murkowski (R-AK) confessed her concerns about Trump and said that she hasn’t made up her mind about who to support in November. Francis Rooney, a Republican member of Congress from Florida, is now leaning toward Biden. A number of prominent Republicans won’t vote for Trump, but they also are reluctant to say so in public.

This doesn’t exactly constitute a surge. A solid core of the party remains firmly behind the president. The more telegenic version of Trump, Tom Cotton (R-AR), is enjoying a swell of support after The New York Times criticized its own handling of the senator’s incendiary and inaccurate piece, “Send in the Military.” So far, Mattis has not played the role of the journalist Edward R. Murrow taking down the demagogue Joe McCarthy.

But you have to believe that statements from Mattis and others are at least going to introduce an element of doubt into the minds of some true believers. Active duty soldiers and veterans who voted for Trump — he received 61 percent of the veteran vote compared to Hillary Clinton’s 34 percent — might just heed the generals. And the latest polls suggest that both older Americans and white Americans are starting to abandon Trump.

I don’t expect Mitch McConnell or Tom Cotton to denounce Trump. Much of the Republican Party will loyally follow the president into his White House bunker. But thanks to the truth-telling of Mattis and others, everyone else will be laughing all the way to the polls at the emperor stripped bare by his enablers.