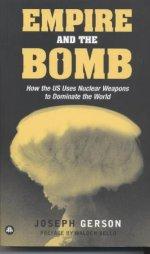 The United States has used its nuclear weapons in many ways. Like cannibalism and slavery, however, nuclear weapons can be abolished.
By John Feffer, Joseph Gerson | November 30, 2007

Over the past six decades, the United States has used its nuclear arsenal in five often inter-related ways. The first was, obviously, battlefield use, with the “battlefield” writ large to include the people of Hiroshima and Nagasaki. The long -held consensus among scholars has been that these first atomic bombings were not necessary to end the war against Japan, and that they were designed to serve a second function of the U.S. nuclear arsenal: dictating the parameters of the global (dis)order by implicitly terrorizing U.S. enemies and allies (“vassal states” in the words of former national security adviser Zbigniew Brzezinski.) The third function, first practiced by Harry Truman during the 1946 crisis over Azerbaijan in northern Iran and relied on repeatedly in U.S. wars in Asia and the Middle East, as well as during crises over Berlin and the Cuban Missile Crisis, has been to threaten opponents with first strike nuclear attacks in order to terrorize them into negotiating on terms acceptable to the United States or, as in the Bush wars against Iraq, to ensure that desperate governments do not defend themselves with chemical or biological weapons. Once the Soviet Union joined the nuclear club, the U.S. arsenal began to play a fourth role, making U.S. conventional forces, in the words of former Secretary of Defense Harold Brown, “meaningful instruments of military and political power.” As Noam Chomsky explains, Brown was saying that implicit and explicit U.S. nuclear threats were repeatedly used to intimidate those who might consider intervening militarily to assist those we are determined to attack.

The final role of the U.S. nuclear arsenal is deterrence, which came into play only when the Soviet Union began to achieve parity with the United States in the last years of the Vietnam War. This is popularly understood to mean preventing a surprise first strike attack against the United States by guaranteeing “mutual assured destruction.” In other words, any nation foolish enough to attack the United States with nuclear weapons will be annihilated. However, Pentagon leaders have testified that deterrence has never been U.S. policy, and they have defined deterrence as preventing other nations from taking “courses of action” that are inimical to U.S. interests. This could include decisions related to allocation of scarce resources like oil and water, defending access to markets, or preventing non-nuclear attacks against U.S. allies and clients, i.e. role #2, using genocidal nuclear weapons to define and enforce the parameters and rules of the U.S. dominated global (dis)order.

My argument is not that U.S. use and threatened use of nuclear weapons have always succeeded. Instead, successive U.S. presidents, their most senior advisers, and many in the Pentagon have believed that U.S. use of nuclear weapons has achieved U.S. goals in the past. Furthermore, these presidents have repeatedly replicated this ostensibly successful model. In fact, even the atomic bombings of Hiroshima and Nagasaki achieved only one of their two purposes. These first bombs of the Cold War did communicate a terrorizing message to Stalin and the Soviet elite about the capabilities of these new weapons and about the U.S. will to use them. But, within weeks of the A-bombings, Washington was sharing influence in Korea with Moscow. Four years later northern China and Manchuria, which U.S. leaders thought they had won with the Hiroshima and Nagasaki bombs, fell into what was seen as the Soviet sphere. In 1954 France declined the offer of two U.S. A-bombs to break the Vietnamese siege at Dienbienphu, and in 1969 North Vietnam refused to be intimidated by Nixon’s “November ultimatum.”

The U.S. commitment to nuclear dominance and its practice of threatening nuclear attacks have, in fact, been counterproductive, increasing the dangers of nuclear war in yet another way: spurring nuclear weapons proliferation. No nation will long tolerate what it experiences as an unjust imbalance of power. It was primarily for this reason that the Soviet Union (now Russia) and China, North Korea, and quite probably Iran opted for nuclear weapons.

The Romance of Ruthlessness

The Bush administration has again put nuclear weapons – and their various uses – at the center of U.S. military and foreign policy. The message of the administration’s Nuclear Posture Review (NPR) in December 2001 was unmistakable. As The Bulletin of the Atomic Scientists editorialized, “Not since the resurgence of the Cold War in Ronald Reagan’s first term has U.S. defense strategy placed such an emphasis on nuclear weapons.” The NPR reiterated the U.S. commitment to first-strike nuclear war fighting. For the first time, seven nations were specifically named as primary nuclear targets: Russia, China, Iraq, Iran, Syria, Libya, and North Korea. Consistent with calls by senior administration figures who spoke of their “bias in favor of things that might be usable,” the NPR urged funding for development of new and more usable nuclear weapons. This included a new “bunker buster.” Seventy times more powerful than the Hiroshima A-bomb, the bunker buster was designed to destroy enemy command bunkers and WMD (weapons of mass destruction) installations buried hundreds of feet beneath the surface.

To ensure that the “bunker buster” and other new nuclear weapons could inflict their holocausts, the NPR called for accelerating preparations for the resumption of nuclear weapons testing at the Nevada Test Site. It also pressed for the nuclear weapons laboratories to continue modernizing the nuclear arsenal and to train a new generation of nuclear weapons scientists. Among their first projects would be the design of a “Reliable Replacement Warhead” to serve as the military’s primary strategic weapon for the first half of the 21st century. With a massive infusion of new funds to consolidate and revitalize nuclear research, development and production facilities, National Nuclear Security Administration Deputy Administrator Tom D’Agostino testified it would “restore us to a level of capability comparable to what we had during the Cold War.”

Later, the Rumsfeld Pentagon published and then ostensibly “rescinded” a non-classified version of its Doctrine for Joint Nuclear Operations. The Doctrine was revealing and profoundly disturbing. In the tradition of the Clinton administration’s Essentials of Post-Cold War Deterrence, the Doctrine communicated that the United States could all too easily “become irrational and vindictive.”

Most striking was the Doctrine’s extended discussion of deterrence. Rather than define deterrence as the prevention of nuclear attacks by other nuclear powers, the Doctrine stated that “The focus of US deterrence efforts is… to influence potential adversaries to withhold actions intended to harm US’ national interests…based on the adversary’s perception of the…likelihood and magnitude of the costs or consequences corresponding to these courses of actions.” Diplomatically, the Doctrine continued, “the central focus of deterrence is for one nation to exert such influence over a potential adversary’s decision process that the potential adversary makes a deliberate choice to refrain from a COA [course of action.]” In addition to putting Chinese diplomatic efforts to marginalize U.S. power in Asia on notice or deterring unlikely Russian or French nuclear attacks, the central role of the U.S. nuclear arsenal was global dominance. China, Russia, France and Germany were reminded of their proper places, and Iran and Venezuela received ample warning not to adopt oil and energy policies that might constitute- courses of action that would “harm U.S. national interests.”

The Doctrine also baldly instructed the U.S. military that “no customary or conventional international law prohibits nations from employing nuclear weapons in armed conflict,” thus subordinating international law to U.S. military strategy. It also argued that nuclear wars could be won. The Doctrine gave increased authority to field commanders to propose targets for nuclear attacks and described the circumstances when field commanders could request approval to launch first-strike nuclear attacks. “Training,” it further stated, “can help prepare friendly forces to survive the effects of nuclear weapons and improve the effectiveness of surviving forces.” The Doctrine went on to reconfirm the bankruptcy of the nuclear reduction negotiations between the United States and Russia. The Doctrine was clear that U.S. nuclear forces would not actually be reduced because “US strategic nuclear weapons remain in storage and serve as an augmentation capability should US strategic nuclear force requirements rise above the levels of the Moscow Treaty.”

Since the end of the Cold War, the media and national political discourse in the United States have focused on the dangers of “horizontal proliferation.” These dangers include “rogue” states with nuclear weapons, the possibility of nations with nuclear power plants becoming nuclear weapons states, and leakage from nuclear stockpiles finding its way to “rogue” states or to non-state terrorist groups like al-Qaeda. One nightmare scenario has envisioned the overthrow of the Musharraf regime in Pakistan, with its nuclear arsenal falling into the hands of radical Islamists.

It doesn’t take a genius to understand the importance of under-funded initiatives like the congressional Nunn-Lugar Nuclear Threat Initiative, which was designed to secure the world’s nuclear weapons, fissile materials, and nuclear wastes. However, these efforts can be no more than stop-gap measures as long as the United States threatens other nations with nuclear attacks and insists on maintaining the terrorizing imbalance of power.

Since the 1995 Nuclear Nonproliferation Review Conference, popular, elite, and governmental demands have been growing for the United States and other nuclear powers to fulfill their Article VI treaty commitment to negotiate the complete elimination of their nuclear arsenals. In 1996, in the International Court of Justice’s advisory opinion on the use and threatened use of nuclear weapons ruled that both are violations of international law, and the Court directed the nuclear powers to implement their Article VI commitments. While NGOs and popular movements from across the world came together to form Abolition 2000, at the elite level former head of the U.S. Strategic Command Gen. Lee Butler – supported by many of the world’s generals and admirals – called for abolition. And, in January 2007, former secretaries of state Henry Kissinger and George Shultz joined former secretary of defense William Perry and former senator Sam Nunn in saying that U.S. double standards were driving nuclear weapons proliferation, and that the time had come for the United States to meet its NPT obligations.

Since then, pressed by voters and community based activists, John Edwards, Barack Obama, and Bill Richardson have each stated that if elected, they will be the president who negotiates the complete elimination of the world’s nuclear weapons. They need to be held to these commitments, and other presidential and congressional candidates need to be pressed to join their commitment. (Dennis Kucinich and Mike Gravel have made similar commitments.)

The political and technical steps needed to eliminate nuclear weapons have long been known. First, the United States must renounce its “first strike” nuclear wear fighting doctrines. Next it must refuse to fund the development and deployment of new nuclear weapons. The other essential steps include verified and irreversible dismantling of nuclear weapons and their installations; halting production of weapons-grade fissile material and securely containing existing stockpiles; verification, including societal verification, and intrusive inspection systems; and investing power in a supranational authority, probably the UN Security Council, to isolate, contain, or remove threats to the nuclear-free order.

Like cannibalism and slavery, nuclear weapons can be abolished. The question is whether we humans have the will and courage to choose life.

John Feffer, Joseph GersonJoseph Gerson is the director of programs of the American Friends Service Committee in New England and a contributor to Foreign Policy In Focus. His previous books include The Sun Never Sets and With Hiroshima Eyes.