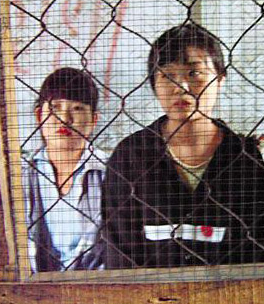 The crisis of people-trafficking and sexual exploitation in Northeast Asia is not a nationalist issue; it is a gender issue.
By Markus Bell | June 3, 2013 As a Pentagon report revealed widespread sexual abuse in the U.S. military, the mayor of Osaka, Japan, Toru Hashimoto, came up with a remedy. Speaking to a U.S. military commander, he suggested that U.S. marines stationed in Japan make more use of Okinawa’s sex industry. It could be a useful tool, he said, for curbing their “aggressive sexual desires.”

The mayor later apologized, acknowledging that his suggestion might be insulting to the U.S. military. He did not apologize, however, for similar statements about the 1940s. Speaking of the Second World War, he insisted that “comfort women” (women who were forced into sexual service for Japanese soldiers) were essential for keeping the military effective. Mincing no words, Hashimoto said, “Anyone can understand that the system of comfort women was necessary to provide respite for a group of high-strung, rough and tumble crowd of men braving their lives under a storm of bullets.”

His comments about the past drew sharp criticism from activist groups in Seoul, where many Korean women living under Japanese rule were conscripted into sexual service, as well as from the U.S. government, which issued a statement condemning Hashimoto’s remarks as “outrageous and offensive.” A former comfort woman declared, “We cannot compromise our painful past as victims and the reality that we still live today for Mayor Hashimoto’s apology performance. We don’t need to be trampled on again.”

Previously seen as a high flyer in Japanese politics, the mayor of Osaka has once again been called upon to apologize for his comments, as support for his right-wing Restoration Party plummets to new lows. In the latest installment of this drama, Hashimoto again took the stand, declaring without equivocation that there is “no evidence” that the Japanese government itself was involved in co-opting the tens of thousands of women drawn into sexual slavery during World War II.

The past reappears in the present

At issue here is not just a denial and rewriting of history. The episode is also deeply revealing of problems in the present. Of the many “history problems” plaguing relations between the nations of Northeast Asia, especially Japan’s connections with China and North Korea, the unresolved issue of the Japanese Imperial Army’s wartime conduct continues to dampen hopes for rapprochement.

But the question goes beyond international relations. What is most troubling about this incident is that the systemized sexual exploitation of women in Northeast Asia is not a thing of the past. In fact, it has continued into the present.

The contemporary victims are North Korean women who flee their country. Once in China, they exist without protection or legal recourse. With no means of living legitimately in China, these North Korean refugees are not only vulnerable to forced repatriation if apprehended by the Chinese police, but are also easy prey for human traffickers operating outside of the law.

The trafficking of North Korean women throughout Northeast Asia is a process whereby women are commoditized. They are sold to Chinese men as brides, or forced into prostitution to pay off debts accumulated while escaping North Korea. In many ways, North Korean women are inheritors of the suffering of the comfort women.

The historical roots of sexual slavery in Northeast Asia

This ongoing humanitarian crisis has its roots in Japan’s colonization of Korea in the early 20th century, and the mass recruitment—mostly through coercion and deception—of women from North and Southeast Asia to work as “comfort women” in the rest stations of the Japanese Imperial Army during World War II. Many of these women worked in unimaginable conditions, servicing Japanese military personnel in stations throughout the region, from Manchuria to the Philippines.

Following the capitulation of Japanese forces in 1945, the United States took over as a builder of empire in Asia. Not unlike the Japanese, the Americans established a chain of military bases from Korea to Japan, Guam, the Philippines, and beyond.

Around these bases emerged “camptowns”—areas of petty commerce, alcohol, and entertainment, replete with a thriving sex trade to “comfort the boys” far from home. Many of the women working in these camptowns had previously toiled under the Japanese.

After 1945, many Korean “comfort women” found the thought of returning home too much to bear, while others who tried to return were ostracized as collaborators who had betrayed both themselves and their country. As a result, many returned to the only thing they had previously known: selling their bodies.

In the late 1960s, as the Vietnam War escalated, Korean camptown sex workers were encouraged, under the Park Chung-hee regime, to act as “goodwill ambassadors” to American soldiers on “R&R” (rest and recuperation), thereby guaranteeing the flow of U.S. dollars to South Korean coffers. American capital, secured in part through the “intimate diplomacy” of camptown sex workers—who were themselves controlled by gangsters and “employment agencies” promising legitimate work—fuelled the industrialization of Seoul. Encouraged by a government focused on modernization at any cost, young women from the Korean countryside poured into the capital to take up places in the factories churning out products for export. Those who were unable to find work on the assembly line often found work in the bars of the camptowns. A direct result of this gendered, mass movement from rural to urban areas was the gradual disappearance of young, unmarried women from the villages of Korea.

Rural Korea was being sacrificed as part of Park’s master plan and, in an effort to placate the fast growing bachelor population of the countryside, the government sponsored “bridal tours” in which it took single Korean men to seek wives in Northeast China. For much of the 1980s and early 1990s, with the explosion of the unregulated bride tourism industry, the bride of choice for the rural Korean bachelor continued to be ethnic Korean women located in China, known as Chosonjok.

However, as more and more of these women followed their new husbands into the Korean countryside, certain “truths” started to be revealed for both parties. Chosonjok women were not as obedient and “traditional” as advertised, while rural Korean men did not provide the women with a gateway to the glitz and glamour of South Korean modernity. As relations between China and South Korea improved, and restrictions gradually relaxed for Chosonjok working in South Korea, it became harder for Korean bachelors to find ethnic Korean-Chinese brides willing to toil with them in the rice fields.

As the availability of Korean-Chinese brides declined, South Korean men started to look further afield for women, venturing outside of Northeast Asia and beyond previously imagined ethnic boundaries. Moreover, as the population of Northeast China became more affluent and mobile, ethnic Korean women, like South Korean women nearly 30 years earlier, were less willing to settle for a rural existence. Therefore, the dearth of potential brides in that area became even more pronounced.

Chinese men in the provinces of Northeast China now find themselves in a similar position to rural South Korean men a generation earlier. With land to work, aging parents to care for, and no heir to pass the estate on to, the men need to find wives. In this case, their demand for brides is being satisfied by North Korean women who cross into China illegally in search of work, food, an escape from hardship, and at times, passage to South Korea.

These women, many of whom are in their late teens and early twenties, are a vulnerable population. The market for brides in China is, as it was in South Korea, unregulated. It is dominated by ethnic Korean and Chinese brokers for whom making a profit is more important than the basic human rights of the individuals of whom they take charge. North Korean women are bought, sold, and trafficked throughout Northeast China and beyond. Many are sold to Chinese men as brides; many others are funneled into the burgeoning sex industry of the region.

A few of the “luckier” women who find themselves victims of human trafficking are able to escape and, often with the help of South Korean-based aid organizations, make their way to South Korea. However, as with the “comfort women” 60 years prior, they find themselves unable to tell their stories. They are silenced by a fear of being stigmatized—labeled as dirty and impure, accused of selling their bodies and their virtue for questionable motives.

History Repeats Itself, If We Let It

The crisis of people-trafficking and sexual exploitation in Northeast Asia is not a nationalist issue; it is a gender issue. Attitudes of those in power toward the women who served the Japanese military, the women who gave their bodies for the dollars that contributed to the Korean “economic miracle,” and the women who currently fill the female lacuna in Northeast China have their roots in empire building and modernization, and they have not changed. In all of these instances, money speaks louder than the cries of the disenfranchised.

If Hashimoto’s comments reveal anything, it is that little has changed in more than half a century. The thread connecting the “comfort women” of the Japanese military during World War II to the trafficking of North Korean women in Northeast Asia today is unlikely to be severed in the near future. The first step towards a reconciliation of nations, and the fulfillment of women’s human rights, needs to begin with an acknowledgement of aspects of the past which for many, such as the mayor of Osaka, are less than a footnote in history.

Markus BellMarkus Bell is a PhD candidate in anthropology at The Australian National University. He is currently researching transnational networks of North Korean migrants.