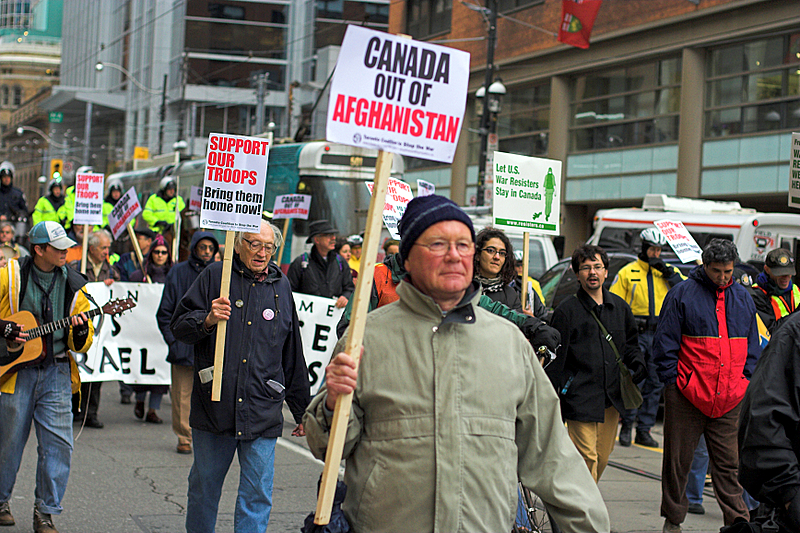 Canadian protesters call for an end to the country's role in Afghanistan. Calling Canada's Afghan adventure a "revolution," author Jerome Klassen argues that Ottawa's foreign policy has gone from something that was at times independent from Washington's to one that is outright subservient to the United States. (Photo: Metric X / Flickr)

Empire’s Ally: What Happened to Canada?

Can international capital explain why Canada has become so subservient to the U.S. in Afghanistan and beyond?
By Conn Hallinan | January 30, 2014

Americans tend to think of Canadians as politer and more sensible than their southern neighbors. That explains why the answer to the joke “Why does the Canadian chicken cross the road?” is “To get to the middle.”

Sure there might be a bit of a muddle over there in Afghanistan, an American might reason, but like the well-intentioned Dudley Do Right, the Canadians are just trying to develop and tidy up the place.

Not in the opinion of co-editors Jerome Klassen and Greg Albo, and the formidable array of academics, researchers, journalists, and peace activists whose essays appear in Empire’s Ally: Canada and the War in Afghanistan. They see Canada’s role in Central Asia less as a series of policy blunders than as a coldly calculated strategy to benefit international capital. “Simply put,” writes Klassen, “the war in Afghanistan was always linked to the aspirations of empire on a much broader scale.”

Empire’s Ally asks the question, “Why did the Canadian government go to war in Afghanistan in 2001?” It then carefully dissects the popular rationales: fighting terrorism, coming to the aid of the United States, helping the Afghans to develop their country — and, oh yes, freeing women from oppression. The book’s autopsy of those arguments reveals deeply disturbing trends.

Calling Canada’s Afghan adventure a “revolution,” Klaussen argues that Ottawa’s foreign policy has gone from something that was at times independent from Washington’s to one that is outright subservient to the United States. “The new direction of Canadian foreign policy cannot be explained simply by policy mistakes, U.S. demands, military adventurism, security threats, or abstract notions of liberal idealism,” he says. “More accurately, it is best explained by structural tendencies in the Canadian political economy — in particular, by the internationalization of Canadian capital and the realignment of the state as a secondary power in the U.S.-led system of empire.”

In short, the war in Afghanistan is not about people failing to read Kipling, but rather is part of a worldwide economic and political offensive by the United States and its allies to dominate sources of energy and weaken any upstart competitors like China, and India. Nor is the “broader scale” limited to any particular region.

Indeed, the United States and its allies have transformed the North Atlantic Treaty Organization (NATO) from a European alliance aimed at containing the Soviet Union, to an international military force with a global agenda. Afghanistan was the alliance’s coming out party, its first deployment outside of Europe. The new “goals” are, as one planner put it, to try to “re-establish the West at the centre of global security,” to guarantee access to cheap energy, to police the world’s sea lanes, to “project stability beyond its borders,” and even to concern itself with “Chinese military modernization.”

If this all sounds very 19th century, as if someone should strike up a chorus of “Britannia Rules the Waves,” the authors in this volume would agree. But they’d point out that global capital is now far more powerful and all embracing than the likes of Charles “Chinese” Gordon and Lord Herbert Kitchener ever envisioned. One of the book’s strong points is its updating of capitalism, so to speak, and its careful analysis of what has changed since the end of the Cold War.

Empire’s Ally’s four major parts deal with the history of Canada’s involvement in Afghanistan, its political and economic underpinnings, the actual Canadian experiences in Afghanistan, and Canada’s anti-war movement. Devastatingly, the authors find that Canada’s activities in Afghanistan had less to do with digging wells, educating people, and improving their health, than with condoning war crimes such as torture. As Canada’s Senate Standing Committee on National Security put it with regard to Kandahar, Ottawa’s major area of concentration in Afghanistan, “Life is clearly more perilous because we are there.”

That diagnosis may ring true not just for Canada, but also for international efforts as a whole. After almost $1 trillion dollars spent worldwide on Afghanistan (Canada’s contribution amounts to about $18 billion), some 70 percent of the Afghan population lives in poverty, and malnutrition has recently increased. Over 30,000 Afghan children die each year from hunger and disease. And as for the goal of liberating women, the “conflict, NATO airstrikes and cultural practices combined” make Afghanistan the “most dangerous country for women” in the world.

This meticulously researched book should be on the shelf of anyone interested in the how and why of western foreign policy. Empire’s Ally is a model of how to do an in-depth analysis of 21st century international capital and a handy guide on how to cut through the various narratives about “democracy,” “freedom,” and “security” to see the naked violence and greed that lays at the heart of the Afghan War.

The authors do more than reveal, however, they propose a roadmap of sorts for peace in Afghanistan. Key to that is “a regional settlement that does not exclude or sideline the feminist, democratic, and progressive movements of Afghanistan.” But before that can happen, the war must end and the occupation troops need to come home.

It is the kind of thinking that could easily be applied to other “hot spots” on the globe. For this book is a warning about the future, when the battlegrounds may shift from the Hindu Kush to the East China Sea, Central Africa, or Kashmir, where, under the guise of fighting “terrorism,” establishing “stability,” or “showing resolve,” the U.S. and its allies may unleash their armies of the night.

While the explicit focus of Empire’s Ally is Canada, the book is really a sort of historical materialist blueprint for analyzing how and why capitalist countries involve themselves in foreign wars. Readers will not only learn a lot about Canada — they will also discover how political economy works and see the goals of the new imperialism for Washington, London, Paris, and Berlin.