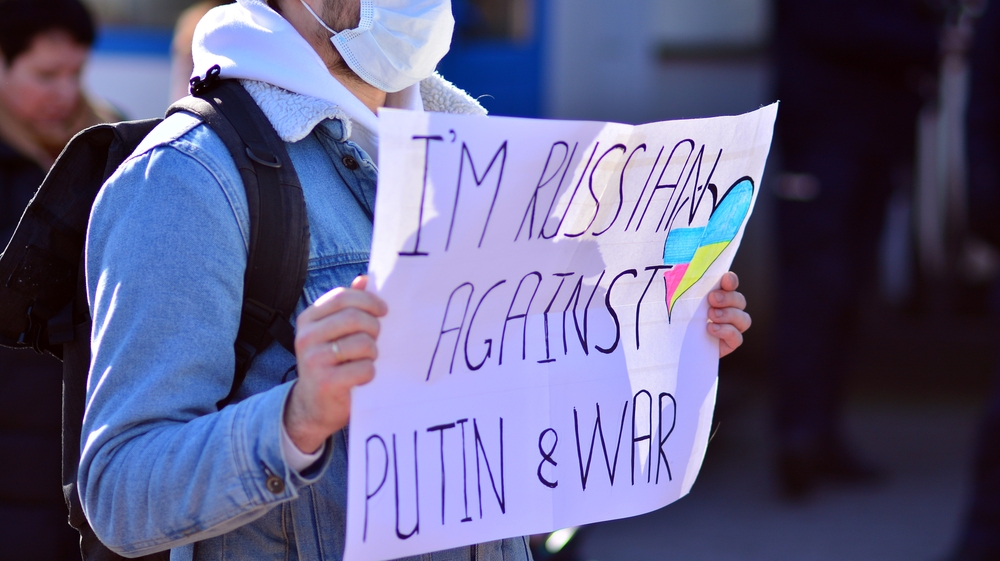 Ending the War in Ukraine

No diplomatic solution is possible without serious pressure on Putin.
By John Feffer | March 23, 2022

Vladimir Putin has a very clear strategy for ending his war in Ukraine. He intends to wipe the country off the map.

Initially, he’d hoped to do so by seizing Kyiv, replacing the government, and absorbing as much of Ukrainian territory into Russia as he thought feasible.

Now, after the resistance of the Ukrainians, he is looking to eliminate their country by a different method. He will bomb it into submission from the air and depopulate the country by turning millions of its citizens into refugees.

The outflow of Ukrainians has the additional benefit, from Putin’s point of view, of putting pressure on the rest of Europe and sowing discord among NATO members. Putin saw how effective Belarusian dictator Alexander Lukashenko was last year in using several thousand desperate migrants from the Middle East as a weapon to provoke European countries. Putin is calculating that a wave of refugees several orders of magnitude larger will swell the anti-immigrant sentiment that has strengthened far-right parties and put the European project at risk.

So far, neither of these strategies is working. With a few exceptions, the European far right has abandoned Putin, and the EU has embraced a double standard on immigration by extending a welcome to Ukrainians that few countries were willing to offer to those fleeing from Afghanistan or Syria.

Meanwhile, NATO is emerging from this crisis with greater cohesion. Putin has forgotten an elemental lesson of geopolitics: a common threat serves as the glue that holds alliances together.

For all of these reasons, Putin is not interested in ending his war in Ukraine. Simply put, as Russian spokesman Dmitry Peskov recently verified, the Russian president has not yet achieved his aims. But he might be forced to end his war for other reasons.

The View from Kyiv

Volodymyr Zelensky has a very clear strategy for ending the war in his country. The Ukrainian president is mobilizing his defenses at home and his supporters abroad. He hopes he can achieve a stalemate on the ground and force Russia to compromise at the negotiating table.

So far, in the first month of the war, both strategies have met with success. The Ukrainian military has blocked the Russian advance on all the major cities, forcing the Kremlin to rely more heavily on an increasingly indiscriminate air war.

The Russian military has expanded its control over the Donbas region in the east. It has taken one major city, Kherson, in the south. But it has not been able to overcome the defenders of Mariupol, a port that represents the last major obstacle to connecting the Crimean peninsula by land to Russia proper.

According to Western intelligence estimates, the Russian army has so far lost at least 7,000 soldiers while 20,000 more have been wounded, which would mean that Russian forces inside Ukraine have been reduced by a third. Unless the Kremlin can send in a lot of reinforcements—Belarussians, Syrians—it will have difficulty taking any major Ukrainian cities, much less hold on to them for any period of time. Ukrainians are returning to the country to take up arms, and volunteers are signing up to fight alongside Ukrainian soldiers, so David is starting to bulk up against Goliath.

Meanwhile, on the international front, the sanctions have attracted widespread support, although some powerful countries like China and India continue to support Putin economically. Some of the sanctions target the lifestyles of the rich and powerful, such as asset freezes and travel bans for top officials. Other measures are beginning to affect ordinary Russians, such as all the job losses from Western businesses like UpWork and Starbucks pulling out of the country.

However, a number of companies are suspending operations in a manner that tries to avoid hurting their Russian staff, like McDonald’s continuing to pay their employees even if the restaurants are closed. Also, the sanctions do not target essentials like medicines. Still, the sanctions are expected to drive Russia into a significant recession, with the economy shrinking by as much as 7 percent. In 2020, the Russian economy contracted by 3 percent as a result of the COVID shutdowns, which at the time was considered a major setback.

Losses on the battlefield and in the global economy are what’s likely to force Putin to end his war before he gets what he wants. No diplomatic solution is possible without this kind of pressure.

The major issue going into the war will likely be the major compromise coming out of the war: Ukraine’s status in the European security system.

Putin not only wants NATO membership off the table for Ukraine, he would like to see the security alliance rewind the clock to 1997 before it expanded into Eastern Europe and the former Soviet Union. However bone-headed NATO expansion was—and it truly was a major blunder on the part of the West—Putin is not going to be able to negotiate a significant drawdown of the alliance’s footprint. Indeed, as a result of the invasion of Ukraine, NATO may well expand to include Finland and Sweden, for starters.

Ukrainian neutrality, on the other hand, is very much a possibility. A report last week about a 15-point draft of a preliminary deal included “Kyiv renouncing its ambitions to join NATO and swear off hosting foreign military bases or weaponry in exchange for security guarantees from countries such as Britain, the United States or Turkey.”

Security guarantees? That’s precisely what NATO membership is supposed to provide. And it’s difficult to envision any of the countries mentioned agreeing to come to Ukraine’s defense in the case of a subsequent Russian attack. They are quite clearly not doing so now. Still, if renouncing NATO membership gets Russia to pull back and stop its air attacks, it would be a worthwhile quid pro quo to pursue.

But then the other major sticking point enters the picture: territory. How much would Russia actually pull back? Would it give up the gains it has made so far in the war? Would it stop championing independence for Donetsk and Luhansk? Would it give back Crimea?

Ukraine to date has refused to acknowledge even the loss of Crimea, so compromise will be challenging. But Zelensky has hinted at the potential of rethinking Ukraine’s borders, contingent on a referendum on the necessary constitutional changes. Perhaps an agreement to return to the status quo ante—with some strategic ambiguity about the final status of Crimea and the Donbas—might be a feasible interim agreement.

The last major question is the composition of the Ukrainian government. Putin has called for the “de-Nazification” of Ukraine. In the best-case scenario, he might be willing to accept some restrictions on the participation of the Azov Battalion in the military. In the worst-case scenario, Putin will not stop until he has installed a “friendly” government in Kyiv.

The threat of Russian influence in Ukraine was a main motivation for Zelensky recently to ban 11 political parties, including the largest opposition party, the pro-Russian Opposition Platform for Life. On the one hand, Ukraine’s democracy is one of its main selling points, so any restrictions on that democracy tarnishes its image. On the other hand, Putin has no qualms about exploiting divisions within Ukrainian society and would rely on these opposition parties to staff any future “friendly” government. Some democratic governments like Germany and Spain have banned political parties that pose a national security threat to their democratic governance.

Zelensky is also well aware of the three foiled assassination plots on his life, all sponsored by Russia. The likelihood that anti-war elements within Russia’s own intelligence services tipped off the Ukrainians suggests that Putin has as much to worry about hostile elements within his political ranks as Zelensky does.

The various peace deals that are leaked to the press could signify combat fatigue, particularly on the Russian side. Or it could be a ploy by Putin to lull his interlocutors into thinking that because they’re dealing with a reasonable negotiating partner it’s important to hold off on another round of sanctions or arms sales.

While I have no illusions about Putin—I think he’s a ruthless fascist—it’s still important to offer him diplomatic off-ramps. There’s nothing more dangerous than a cornered dictator with nuclear weapons.

The goal must be to stop the war and preserve what’s left of Ukrainian sovereignty. Russian troops must leave; the Ukrainian people must decide their leadership, not the Kremlin. Meanwhile, it’s likely that the vast majority of Ukrainian refugees want to return home and rebuild their country, just as the bulk of Kosovars did after the end of the war with Serbia in 1999. The West must be at least as generous with resettlement and reconstruction funds as it has been with arms deliveries.

The Kosovo case is instructive for another reason.

Serbian strongman Slobodan Milosevic, a Communist apparatchik turned political opportunist who became a vehement nationalist when circumstances propelled him in that direction, over-reached in 1999 in an effort to prevent Kosovo from becoming independent. His military campaign failed, and the very next year, the opposition swept him from power in elections. By 2001, he was arrested in Serbia and then delivered to the war crimes tribunal in the Hague. He died in disgrace.

Putin certainly wants to avoid that fate. Megalomania, however, has nudged him in that direction. So, now begins the challenge of peeling away Putin’s sense of his own invincibility—first in Ukraine, then in Russian politics, and finally in the court of international law.