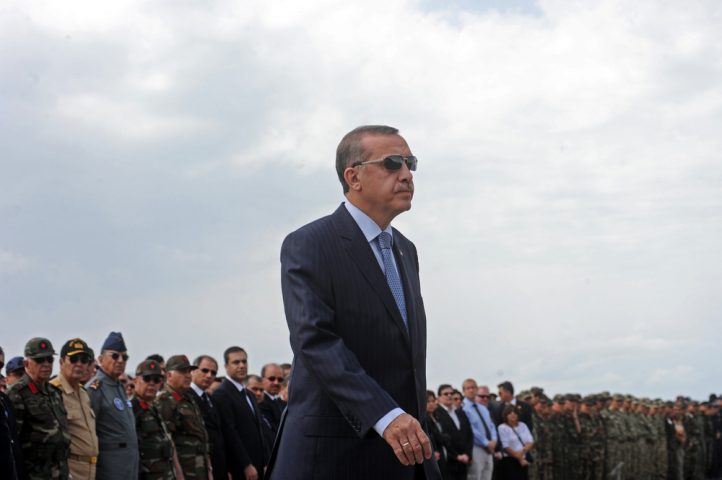 Instead of halting the Damascus government’s siege of the last rebel held province, Idlib, Turkey has backed off, and Erdogan’s newest Syrian misadventure is fueling growing domestic resistance to the powerful autocrat.

The crisis began on February 25, when anti-government rebels, openly backed by Turkish troops, artillery, and armor, attacked the Syrian army at the strategic town of Saraqeb, the junction of Highways 4 and 5 linking Aleppo to Damascus and the Mediterranean. The same day, Russian warplanes in southern Idlib were fired upon by MANPADS (man portable air-defense systems), anti-aircraft weapons from Turkish military outposts. The Russian air base at Khmeimim was also attacked by MANPADS and armed Turkish drones.

What happened next is still murky. According to Ankara, a column of Turkish troops on its way to bring supplies to Turkish observer outposts in Idlib were attacked by Syrian war planes and artillery, killing some 34 soldiers and wounding more than 70. Some sources report much higher causalities.

But according to Al Monitor, a generally reliable online publication, the column was a mechanized infantry battalion of some 400 soldiers, and it wasn’t Syrian warplanes that did the damage, but Russian Su-34s packing KAB-1500Ls, bunker busting laser guided bombs with 2400 lb. warheads. Syrian Su-22 fighters were involved, but apparently only to spook the soldiers into taking cover in several large buildings. Then the Su-34s moved in and brought the buildings down on the Turks.

The Russians deny their planes were involved, and the Turks blamed it all on Damascus. But when it comes to Syria, the old saying that truth is the first casualty of war is pretty much a truism.

Erdogan initially blustered and threatened to launch an invasion of Idlib — which, in any case, was already underway. But then, after initially remaining silent, Russian Rear Admiral Oleg Zhuravlev said that Russia “cannot guarantee the safety of flights for Turkish aircraft over Syria” in the event of a full-blown conflict between the parties.

The Turkish president is a hardhead, but he is not stupid. Troops, armor, and artillery without air cover would be sitting ducks. So the Turks pulled back, the Syrians moved in, and now Russian military police are occupying Saraqeb. Russia has also deployed two cruise missile armed frigates off  the Syrian coast.

The War at Home

But for Erdogan, the home front is heating up.

Even before the current crisis, the opposition Republican People’s Party (CHP) has been demanding that Erdogan brief the parliament about the situation in Idlib, but the president’s Justice and Development Party (AKP) voted down the request. The right-wing, nationalist Good Party — a CHP ally — made similar demands, which have also been sidelined.

All the opposition parties have called for direct negotiations with the Assad government.

The worry is that Turkey is drifting toward a war with Syria without any input from the Parliament. On February 12, Erdogan met with AKP deputies and told them that if Turkish soldiers suffered any more casualties — at the time the death toll was 14 dead, 45 wounded — then Turkey would “hit anywhere” in Syria. To the opposition that sounded awfully like a threat to declare war.

Engin Altay, the CHP’s deputy chair, said “The president has to brief the parliament. Idlib is not an internal matter for the AKP.” Altay has also challenged Erdogan’s pledge to separate Turkey from extremist rebels like Hayat Tahrir al-Sham, an affiliate of al-Qaeda. “Is this even possible?” he asked, “There is no way to distinguish these from each other.”

Turkey made an agreement with Russia in 2018 to allow Turkey to set up observation posts in Idlib if it pledged not to support extremists like Tahrir al-Sham , but Ankara has facilitated the entry of such groups into Syria from the beginning of the war, giving them free passage and supplying them with massive amounts of fertilizer for bombs. In any case, the extremists eliminated any so-called “moderate” opposition groups years ago.

“Turkey said it would disassociate moderate elements from radicals,” says Ahmet Kamil Erozan of the Good Party, “but it couldn’t do that.”

The Kurdish-based progressive People’s Democratic Party (HDP) parliamentarian Necdet Ipekyuz charged that “Idlib has become a nest for all jihadists. It has turned into a trouble spot for Turkey and the world. And who is protecting these jihadists? Who is safeguarding them?”

Erdogan has jailed many of the HDP’s members of parliament and AKP appointees have replaced the party’s city mayors. Tens of thousands of people have been imprisoned, and tens of thousands more dismissed from their jobs. The media has largely been silenced through outright repression — Turkey has jailed more journalists than any country in the world — or ownership by pro-Erdogan businessmen.

But body bags are beginning to come home from a war that looks to a lot of Turks like a quagmire. The war is costly at a time of serious economic trouble for the Turkish economy. Unemployment is stubbornly high, and the lira continues to fall in value.

Polls show that a majority of Turks — 57 percent — are more concerned with the economy than with terrorism. While Turks have rallied around the soldiers, before the recent incident more than half the population opposed any escalation of the war.

Trouble with the Neighbors

Meanwhile Turkey seems increasingly isolated. Erdogan called an emergency session of NATO on February 28, but got little more than “moral” support. NATO wants nothing to do with Syria and certainly doesn’t want a confrontation with Russia, especially because many of the alliance’s members are not comfortable with Turkey’s intervention in Syria. In any case, Turkey is not under attack. Only its soldiers, who are occupying parts of Syria in violation of international law, are vulnerable.

The Americans also ruled out setting up a no-fly zone over Idlib.

Erdogan is not only being pressed by the opposition, but from the Nationalist Movement Party (MHP) within his own ruling coalition. The MHP, or the “Gray Wolves,” have long represented Turkey’s extreme right. “The Turkish nation must walk into Damascus along with the Turkish army,” says Devlet Bahceli, leader of the MHP.

Erdogan has no intention of marching on Syria’s capital, even if he could pull it off. The president wants Turkey to be a regional player, and occupying parts of Syria keeps Ankara on the board. But that line of reasoning is now under siege.

Turkey’s allies in the Syrian civil war are ineffective unless led by and supported by the Turkish army. But without air cover, the Turkish army is severely limited in what it can do, and the Russians are losing patience. Moscow would like the Syria war to end and to bring some of its military home, and Erdogan is making that difficult.

Moscow can be difficult as well, as Turkey may soon find out. The two countries are closely tied on energy, and, with U.S. sanctions blocking Iranian oil and gas, Ankara is more and more dependent on Russian energy sources. Russia just built the new TurkStream gas pipeline across the Black sea and is building a nuclear power plant for Turkey. Erdogan can only go so far in alienating Russia.

Stymied in Syria and pressured at home, Erdogan’s choices are increasingly limited. He may try to escalate Turkish involvement in Syria, but the risks for that are high. He has unleashed the refugees on Europe, but not many are going, and Europe is brutally blocking them. He may move to call early elections before his domestic support erodes any further, but he might just lose those elections, particularly since the AKP has split into two parties. A recent poll found that 50 percent of Turks say they will not vote for Erdogan.

Or he could return to his successful policies of a decade ago of “no problems with the neighbors.”