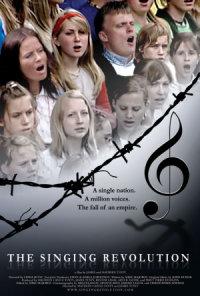 Poster for the film The Singing Revolution

There is an infamous line from the Nazi era, which Hermann Goring adapted from a play performed on Hitler’s birthday: “When I hear the word ‘culture’ I reach for my gun.”

By contrast, the people of Estonia, when faced with many guns, reached for their culture.

In a remarkable new documentary, The Singing Revolution, filmmakers Maureen and Jim Tusty tell the little-known story of the Estonian people’s nonviolent struggle against decades of Soviet occupation, culminating in that country’s independence in 1991. The movement played an important role in the downfall of the entire Soviet Empire.

Over the previous several years, nonviolent uprisings had helped topple Communist dictatorships in Eastern Europe as well as right-wing dictatorships from Southeast Asia to Latin America. Earlier in the century, Gandhi’s movement in India demonstrated the power of nonviolent action in leading a country to independence against even the powerful British Empire. The people of Estonia, along with their neighbors in Latvia and Lithuania, similarly showed how sustained nonviolence could be successfully waged against the Soviet occupation of their country. Music was a key part of this struggle.

Music around the World

Music has played a key role in nonviolent struggles around the world. With updated lyrics to traditional African-American Gospel music that stressed emancipation and resistance, song energized the U.S. civil rights movement in the 1960s. The Nuevo Cancion movement, blending local folk music traditions with language espousing justice and resisting repression, inspired the pro-democracy campaign in Chile during the 1980s. And the rich harmonies of African folk tradition, with lyrics calling for freedom and defiance against the oppressors, empowered the South African struggle against apartheid.

In most such cases, the music was an inspirational and unifying force for the movement. In Estonia, music – primarily the country’s rich choral tradition – played an even more central role for it embodied the essence of the struggle. For centuries, foreign domination had threatened Estonian national and cultural identity. Many other peoples would have assimilated in the face of centuries of foreign control, but the Estonians refused to give up their unique culture. They speak a language totally unrelated to the Slavic and Scandinavian languages of their neighbors; they are mostly Lutheran, whereas most of their immediate neighbors are Catholic or Orthodox. A more immediate threat to their linguistic and cultural heritage was the huge number of Russian settlers who moved into the country since the Soviet re-conquest in 1944 – to the point where these Russian settlers almost outnumbered the Estonians themselves. Despite claims of international proletarian solidarity, the 20th-century Soviet Communists were in many ways as chauvinistic in their nationalism as the czars who had occupied Estonia in the 18th and 19th centuries.

Though one of the world’s smallest countries, Estonia has one of the world’s largest repertoires of folk songs, and the Estonians have used their music as a political weapon for centuries. Songs were used as protest against German conquerors as far back as the 13th century and as an act of resistance against the occupying army of Russian czar Peter the Great in the 18th century. Since 1869, Estonians have taken part in an annual song festival known as Laulupidu, where choirs from around the country come together for a multi-day celebration of choral music, with as many as 25,000 people singing on stage at the same time. These gatherings, which have attracted crowds of hundreds of thousands, have always been as much about the popular yearning for national self-determination as they have been about music. Laulupidu became the cornerstone of the resistance against the Soviet occupation, when – in addition to singing the requisite songs praising the state and the Communist Party – the organizers defied Soviet officials by including banned nationalist songs and symbols. Despite divisions within the nationalist movement and despite violent provocations by Soviet occupation forces and pro-Soviet Russian settlers, the movement gained strength, and the public protests, nationalist displays, and other forms of nonviolent resistance escalated.

Given Estonia’s small size, armed resistance would have been completely futile and only led to more suffering. Russia was 300 times the size of Estonia, whose population was barely more than one million. The Soviet Red Army, the largest armed force in the world at that time, was more than prepared to crush any form of armed resistance. Yet it was no match for hundreds of thousands of nonviolent Estonians singing their way to freedom. When this nonviolent resistance movement began in the mid-1980s, taking advantage of the limited space made possible by reforms enacted by Soviet leader Mikhail Gorbachev, the Soviets had no clue what was coming. By all conventional measures, they had things under complete control.

The West didn’t have a clue what was coming either, however. Washington believed that the best way to deter the feared expansion of Soviet Communism was through NATO, the massive procurement of arms, and the threat of triggering a nuclear holocaust. For decades, the assumption was that these Soviet-imposed autocratic regimes could not be rolled back. Estonia was deemed a hopeless cause. The United States did provide nominal recognition to the impotent remnants of a rightist Estonian government-in-exile, largely unaware of the exciting changes taking place inside the country.

Few anti-imperialists in the West were aware of what was happening in the Baltic republics during this period, either. They were wary of the right-wing nationalism of many Estonian exiles and offended by the hypocrisy of the U.S. government giving lip service to freedom in Eastern Europe while backing brutal autocratic regimes elsewhere and arming foreign occupation forces in East Timor, Palestine, and Western Sahara. However, the burgeoning Estonian struggle for independence crossed the ideological spectrum, with even the Estonian Communist Party eventually confronting Moscow with demands for independence from the Soviet Union. The Estonian people’s concern was not in great power rivalries, but in national freedom.

Meanwhile, the Reagan administration, which did think that Communism could be rolled back, thought the best way to end Soviet occupations was through support for armed groups like the Afghan mujahadin. This strategy did eventually result in driving out the Soviets from Afghanistan. But the war also resulted in the deaths of hundreds of thousands of civilians, the displacement of millions, and fueled an Islamic radicalization that tragically came to our shores on 9/11.

The Estonians, however, had a better way: through massive noncooperation, through building alternative national cultural institutions, and through their music.

The Estonians’ commitment to nonviolence and their embrace of music not only made their independence struggle a success, it was also key in making Estonia a successful democracy. There are still ongoing political struggles in the country, particularly regarding the rights of Estonia’s large Russian minority. But the use of a nonviolent strategy in the independence struggle has led to a climate where such potentially explosive issues are addressed without the warring militias and ethnic cleansing that have characterized other countries with serious ethnic divides.

Indeed, the Estonian revolution was led not by an elite vanguard of unsmiling ideologues. It was a massive, inclusive, and democratic celebration of a nation and its culture. Those values continue to resonate to this day. The Estonians did Emma Goldman proud. They danced, and they had a revolution.

Stephen Zunes is a professor of politics at the University of San Francisco, a chair of the board of academic advisors for the International Center on Nonviolent Conflict, and a senior analyst for Foreign Policy In Focus.