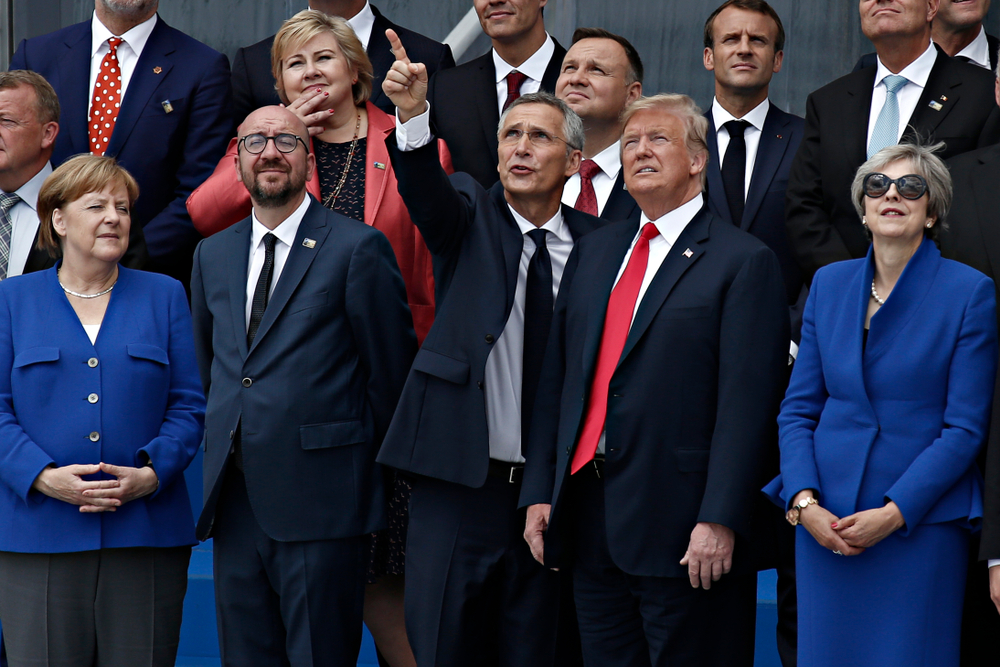 Trump with European leaders at the 2018 NATO summit (Shutterstock)

Europe should take advantage of Trump’s hostile attitude to get out of a relationship that's brought more drawbacks than benefits.
By John Feffer | July 23, 2018

On his recent trip to Europe, he dismissed Germany as Moscow’s minion and called the European Union a “foe.” He’s also treated NATO as an alliance to be bullied into submission rather than as the premier method of coordinating security policy with friendly nations. He even threatened to pull the United States out of the alliance.

It’s tempting to stick up for any victim of Trump’s bullying. But NATO’s strong enough to fight its own battles. It will easily shrug off Trump’s insane insistence that NATO members spend 4 percent of their GDP on their militaries, a figure that even the United States doesn’t reach.

Trump’s temper tantrum has made one thing clear, however. NATO is obsolescent.

Nearly 30 years ago, the United States had a golden opportunity to demilitarize trans-Atlantic relations. The Warsaw Pact disappeared in March 1991, followed by the Soviet Union at the end of the same year. NATO, a bulked-up heavyweight, was suddenly alone in the ring, swinging at nothing but air.

Instead of retiring the alliance at the top of its game, however, the United States insisted on finding new opponents to fight. NATO was drawn into out-of-area operations in the first Gulf War. It intervened in the wars in former Yugoslavia throughout the 1990s. And it participated in its first full-scale war in Afghanistan in 2003.

However you feel about those wars, NATO was not an indispensable force in the fighting. If NATO had dissolved in 1991, along with the Warsaw Pact, European countries could have decided individually, on a case-by-case basis, whether to partner with the United States in those conflicts.

On the contrary, instead of dissolving, NATO grew. It spread eastward, absorbing the former Warsaw Pact nations of East-Central Europe and encroaching on the borders of Russia itself with the incorporation of the Baltic states in 2004. At least part of the tension in U.S.-Russian relations stems from Moscow’s perceptions of NATO (and Western) meddling in the affairs of its neighbors.

Instead of sticking with NATO, the United States should have helped build an organization devoted to collective security that included Russia as an equal member. However, the George H.W. Bush administration made the deliberate decision to undercut just such an organization — the Organization for Security and Cooperation in Europe — and ensure that it would always be the poorer cousin of NATO.

Today, Europe finds itself caught between a more aggressive Russia and a more unpredictable United States. It has justifiable concerns about Russian actions in Ukraine and its shows of force around the Baltic states. But Europe is also shocked by Trump’s imposition of tariffs on European goods and the president’s open hostility toward European values.

True, Trump may not last more than an additional two years, and even Putin won’t be Russian president forever. Europe’s instinct, at the moment, is to hunker down and preserve NATO. But that’s a mistake.

Instead, Europe should bring an end to its Cold War relationship with the United States. It should stop feeling compelled to fight the wasteful wars the United States starts. It should make its own decisions about how much money to spend on its militaries. And it should stop subsidizing America’s global footprint through a network of military bases from Ireland to Turkey.

By staying in NATO, Europe has done little to temper the worst excesses of U.S. militarism. The United States has gone ahead with wars whether NATO was on board or not, as was the case with the Iraq War in 2003.

Europe has already taken steps to create its own independent military force. In December, 25 of 28 EU member states agreed to finance European military capabilities and begin integrating their militaries. A Franco-German brigade, established in 1989, could serve as the foundation of a European army.

Together, Europe has enough firepower to deal with any external threat. France and Germany together spend nearly twice what Russia does on the military. And without the persistent pressure of NATO’s eastern ambitions, Europe might well be able to negotiate a more cooperative set of relationships with Russia.

In other words, Europe should take advantage of Trump’s overtly hostile attitude to get out of a relationship that has brought more drawbacks than benefits. It’s time for Europe to call Donald Trump’s bluff and strike off on its own.