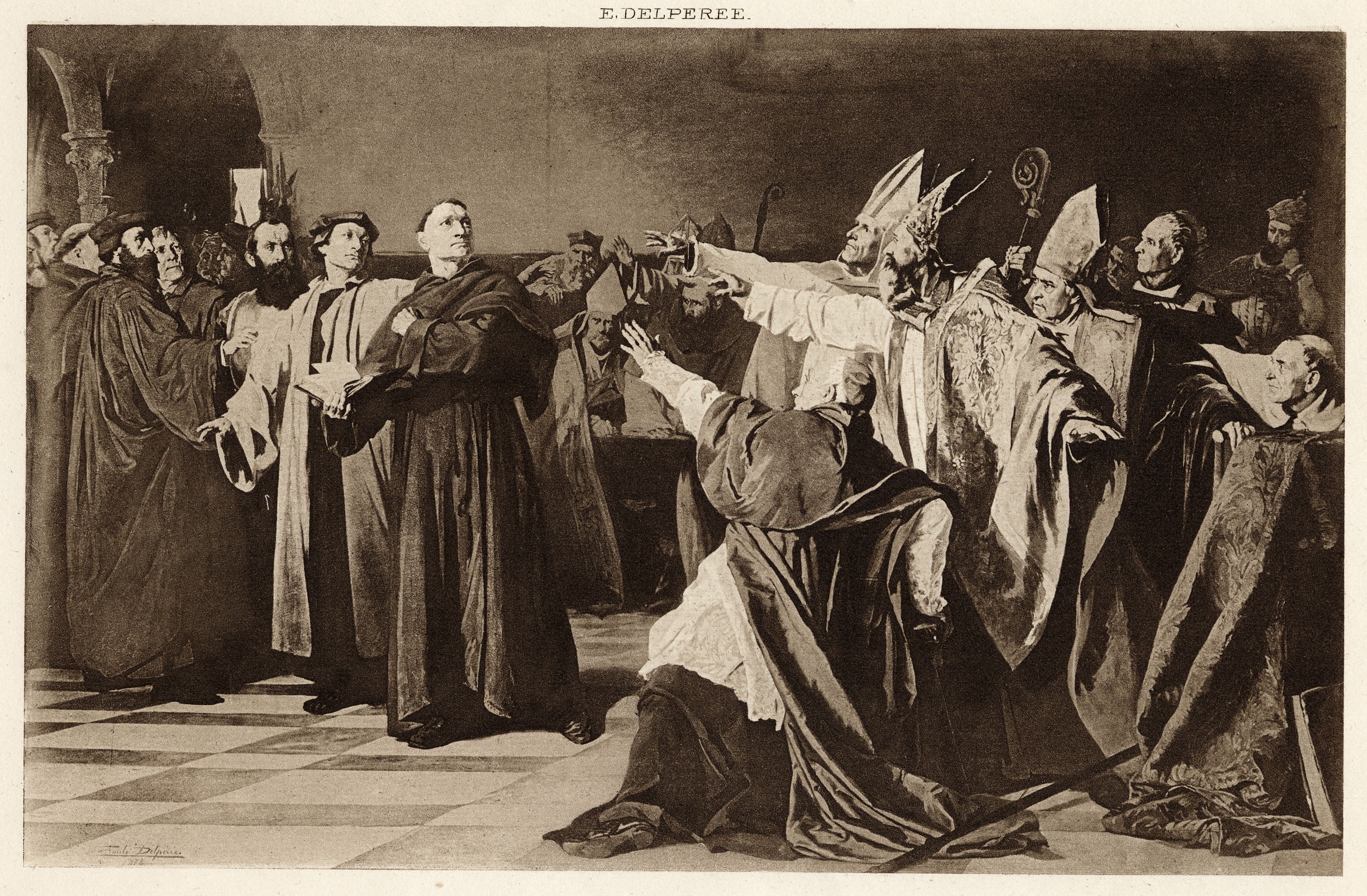 What Martin Luther can teach us about Marine Le Pen and Europe's far-right reformation.
By John Feffer | June 11, 2014 They were nationalists. They despised the huge supranational institution that ruled over Europe. They expressed little faith in the bureaucracies of power and preferred a more direct connection to the people. And they used the latest technologies to promote their messages.

Take your pick: the Protestants of the 16th century or the populists of today.

It might not seem obvious to put Marine Le Pen and Martin Luther side by side. The former is the divorced, pro-choice leader of France’s far-right National Front, the political party that draws heavily on the Catholic vote and topped the French polls in the recent elections for the European parliament. The latter was the revolutionary leader of the Protestant Reformation, an austere former priest who favored grand gestures and betrayed a weakness for drink and anti-Semitism.

Despite the gap in years and personality traits, the leaders of these two upheavals—one religious, the other political—share much in common.

Consider for instance, the Euroskepticism of parties like the National Front. Transpose the religious chords into political ones and today’s anti-Brussels rhetoric sounds much like the anti-Rome diatribes of five centuries ago. The populists talk about the European Union and its encumbering bureaucracy as if it were a conspiracy of Papists selling relief for your sins. The Euroskeptics would prefer to draw back from Brussels and emphasize national sovereignty, much as the Protestants eschewed Latin in favor of the vernacular as they laid the foundation for the modern nation-state. Moreover, the populists believe in communicating directly with voters, dispensing with the trappings of conventional politics in the same way that the Protestants emphasized a personal relationship with God. And the printing press that spread the writings of Luther and his minions—exit Guttenberg, enter Zuckerberg—finds its parallel in the social media platforms that have contributed to the rise of today’s populists.

The Protestant Reformation undermined but did not destroy the Catholic Church. And it’s not likely that the right-wing populists will destroy the European Union. But today’s populist reformation will necessarily redraw the political map of the continent in ways that we can only dimly glimpse at the moment.

Journalists and pundits are treating this nationalism-inflected populism as if it were somehow a new phenomenon. In fact, this populism can be traced back to the end of the Cold War (and even earlier, as Richard Caplan and I explained in our edited collection Europe’s New Nationalism back in 1996).  The collapse of Communism, the disintegration of the multiethnic states of Yugoslavia and the Soviet Union, the increase in immigration flows to and within Europe, the expansion of the EU to the east and south, and the first cracks in the Western welfare states all contributed to the rise of parties like the Freedom Party in Austria, Vlaams Blok in Belgium, and the National Front in France.  Over the last quarter century, citizens have felt less and less in control over their lives, as political and economic decisions are increasingly made at levels of power ever more distant from them.

But it took the results of the recent European parliament elections to shine a spotlight once again on this challenge to the political mainstream. We should be careful, however, not to exaggerate the recent victory of right-wing populism. After all, the elections provide a somewhat distorted data set. First of all, the turnout was low, even by American standards: about 43 percent. Second, voters were often using their votes to retaliate against the policies of the ruling parties in their respective countries rather than choosing between different visions of what Europe should look like. In some countries—like Slovakia, where the turnout was an embarrassing 13 percent—the citizenry doesn’t seem to care much at all about the direction Europe takes.

Also, the electoral results were not unambiguous. Lost in much of the coverage of the elections, as Foreign Policy In Focus (FPIF) columnist Conn Hallinan points out, was the success of the left: “Where there was a clear choice between economic democracy on one hand and ‘let’s blame it on the immigrants and Roma’ on the other—as in Greece, Spain, Portugal, Ireland, and most of Central and Eastern Europe—voters went left.”

But elections rarely offer clear-cut choices. And even though the radical right had long been expected to do well in these elections—as Vojko Volk predicted for FPIF back in January—the results still had the capacity to shock. As Stefan Haus writes in FPIF, “Most recent reports indicate that a record 140 seats out of 751 will go to the far right. The biggest winner was Marine Le Pen and her National Front, which won an astonishing 25 percent of the French vote—translating into 24 seats in parliament—and left former President Nikolas Sarkozy’s UMP in second and current President Francois Hollande’s Socialist Party in a remote third.”

The other big surprise was the United Kingdom Independence Party, which seemed to come out of nowhere to top the polls over both the Conservatives and Labor. Successful showings by the Danish People’s Party, Golden Dawn in Greece, and the one-two punch of Fidesz and Jobbik in Hungary also buoyed the hopes of right-wing populists, who are looking to create a new parliamentary bloc around Marine Le Pen and her European Alliance for Freedom.

Populism, of course, is not a monopoly of the right. It is a political style more than a specific ideology. Populists can be found across the political spectrum. What unites them is a suspicion of the “experts”—the economic advisors who insist on austerity, the political operatives who wheel and deal in the backroom, the technocrats who are data-driven to a fault. Most of all, in Europe today, populists have taken aim at Brussels, where all these cults of expertise converge.

Back when membership in Europe meant a chance to close the development gap, there was little room for populism. But now the EU is punitive. It insists on budget cutting. It imposes penalties for not meeting community-wide standards (although the infamous directive on the curvature of the cucumber was repealed in 2008, plenty of other regulations remain). Like the Pope in Rome, Brussels dispenses favors to some and excommunication to others. No surprise, then, that the EU has generated a multitude of Martin Luthers who rail against the distant tyrant and spread their modern versions of the 95 Theses by Twitter and Facebook.

Another feature of populism is its focus on the past. The Euroskeptics harken back to what they imagine was a better world—before large-scale immigration, large-scale integration, and large-scale globalization. This is, as political scientist Paul Taggart calls it, “a version of the past that celebrates a hypothetical, uncomplicated, and non-political territory of the imagination.”

These features of populism can also be found in the Tea Party here in the United States. In his recent upset victory over Eric Cantor in the Republican primary in Virginia, challenger David Brat sounded many of the same anti-immigration themes as his European co-religionists. And tellingly, when Brat described his long-shot effort, he called it not a David-versus-Goliath campaign, but “David versus Rome.” It was a mixed historical metaphor that his Protestant base would nevertheless instantly understand (Brat, by the way, got his M.Div. at Princeton Theological Seminary and has written on the economics of the Protestant Reformation).

Populism is not just a style, of course. It is also an epithet. Whenever political parties or would-be insurgent leaders offer programs that deviate from what the experts have determined to be “the only way forward,” the challengers run the risk of being labeled “populists.” Those who defy market logic to call for debt forgiveness or deficit spending or controls on foreign investment have all been diminutively labeled “populist” at one time or another.

What makes a true populist, however, is an instrumental approach to politics. The authentic populist will support policies to gain office not out of deep commitment to the issue. Policy positions are just so many ladders to be kicked away once the aspiring office-seeker reaches the summit of power. Merit—of the individual or of the argument—is immaterial. All that matters is persuasion. “The only skill or ability that’s important at the moment is the social skill,” Goran Buldioski, of the Open Society Think Tank Fund in Budapest, told me in an interview last year. “This is deeply troubling. If you’re able to navigate through society by expressing your loyalty upwards and your use of brute power downwards, then you will be successful.”

Martin Luther certainly took aim at the priestly class and wanted to restore Christianity to a pristine past that existed only in his imagination (a tenet that today’s fundamentalists have preserved). But Luther was no instrumentalist. He was a true believer.

The true test, then, of whether the new crop of Euroskeptics entering the European parliament are populists or not is whether they will conspire to bring the house of Strasbourg down on themselves. They very well might attack the Eurozone and then go after the very economic foundations of the EU, sending the continent back to, well, the 16th century. But if they discover the attractions of Euro-politics, their populism will turn to pragmatism and their reformation will fizzle out. The common European home will have experienced a significant temblor, but the walls will remain intact.