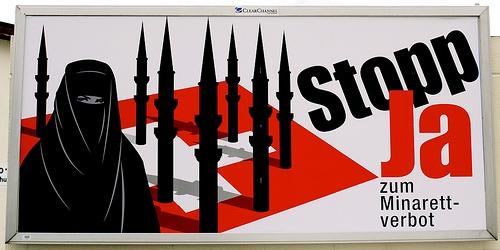 It's not just the minaret issue in Switzerland. Or the head scarf issue in France. Anti-Islamic sentiment is growing Europe-wide.
By Jeanne Kay | April 9, 2010 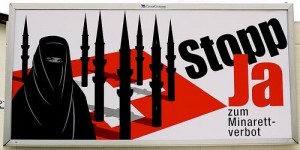 When the Swiss voted last year to prohibit future construction of minarets on their soil, political commentators in neighboring European countries were quick to express their moral outrage. “The vote of shame,” headlined Liberation in France. Belgium’s Le Soir deemed targeting the towers in order to aim at the population below them to be “hypocritical and fallacious.” The London Times predicted “international embarrassment” for Switzerland.

In the following days, however, the European media’s focus turned inwards to ask the inevitable question: Would this happen at home? Newspapers informally polled their readers and found out that they supported the Swiss stance, with unequivocal scores on major newspaper websites: 80 percent for Spain’s El Pais , 79 percent in the German Die Welt. In France, the polling institute IFOP found that more citizens favored rather than opposed a ban on minarets.

European approval of the Swiss referendum result is more than anecdotal. It reflects the current unfurling of Islamophobia on the continent. The IFOP poll in France didn’t stop at the minaret question. It also revealed that a relative majority (41 percent) also opposed the construction of new mosques — a dramatic increase since 2001, when that number was 22 percent. Placed in the context of the state-launched debate on national identity, which sanctioned the unleashing of latent anti-immigrant — now synonymous with “anti-Arab — sentiment throughout the country, the trend inscribes itself in the bigger picture. A sea change has occurred in how Europeans view Islam in Europe.

The Rise of the Right

European far-right parties are rejoicing to see their favorite campaign themes in the forefront of public discourse. Elections this March have shown how the populist rights of Europe are benefiting from the cross-continent Islamophobic tide. Geert Wilders’ Freedom Party became the second leading political force in The Hague in municipal elections, after running on an unmistakably anti-Islam platform. Meanwhile, Jean-Marie Le Pen’s National Front, which had been declared moribund after French President Nicolas Sarkozy’s successful wooing of its voter base — managed a surprising comeback in the first round of the regional elections in France, gathering close to 12 percent of the votes (and 19 percent in the north). In last week’s regional elections in Italy, the Northern League, which campaigned in the Arezzo region by distributing free soap samples to use “after having touched an immigrant,” took over Veneto and Piemonte. Luca Zaia, whose campaign emphasized his anti-Islamic stance and ambition to push immigrants “back into the sea,” became governor of the Veneto with a landslide.

The populist right of Western Europe shares a common contempt for elite politicians whose commitment to political correctness, populists claim, leaves them out of touch with the realities of the people who have to live with the results of a lax immigration policy. The far right’s discourse has shifted away from a racist line that excludes all non-whites and toward a stricter focus on Islam. This has broadened the audience to include those who don’t consider themselves racist, but decry Islamic fundamentalism in the name of general values or the preservation of a monolithic national culture. Using alarmist rhetoric to raise fears over the loss of a national identity, allegedly stifled by ever-pervasive Islamic culture, far-right leaders select highly symbolic issues as their campaign banners. In France, the National Front jumped on the case of a fast-food chain that chose to use only halal meat in restaurants located in districts with large Muslim populations. Marine Le Pen, the daughter of National Front leader Jean-Marie Le Pen and the group’s new ambassador, expressed her indignation that these restaurants’ customers would be obligated to “pay a tax to Islamic meat certification companies” and called for the consumer’s right to choose.

But the populist right doesn’t hold a monopoly on the clash-of-civilization narrative in Europe. Parties of the moderate right have jumped on the Islamophobia bandwagon to gain political capital from the sordid national identity debate. They are sometimes even joined by social democrats under the banner of liberal values. Mainstream politicians most often invoke “Enlightenment” values to stigmatize features of Islam. In the Netherlands, the alleged incompatibility of Islam with the country’s historic gay-positive culture is a critical argument in anti-Islamic rhetoric. But co-opting liberalism is particularly prominent in the debate over the veil in public spaces, a hot issue across western Europe.

Last year, Nicolas Sarkozy’s declaration that the full-body veil was “not welcome in France” launched a nationwide debate, which is now likely to turn into a legislative effort. The Socialist Party, meanwhile, was unable to take a strong critical stance because of its commitment to feminism and historic defense of republican secularism. Legislation to ban the burqa and niqab in public places is also on the table in the Netherlands, while Denmark already instituted such a law this past January. Belgian representatives are expected to pass a bill in mid-April that, although not containing any reference to Islam, prohibits individuals from covering their faces in public. Such a law has already been in practice in Italy since 1975, but the Northern League is advocating for it to be amended to specifically mention the veil.

Critics of Nicolas Sarkozy’s government’s initiative to launch a country-wide debate on defining national identity suggested that a more useful debate would tackle the issue of European identity. Although the European Union continues its course toward tighter political and economic integration, a general apathy — if not outright distrust — toward the EU remains among the general population. Fostering a sense of a shared multicultural identity, which could result in increased European civic interest and engagement with EU politics, is hindered by the Right’s exploitation of people’s fears over loss of sovereignty and national identity.

When Poland entered the Schengen Space in 2004, Western Europe feared the “Polish plumber invasion” — the massive westward migration of low-wage worker. Now Western Europeans are rallying against the entry of Turkey into the EU. The European Commission’s 2007 Eurobarometer showed that only 28 percent of European citizens favored Turkey’s integration. The prospect of a wave of Turkish immigrants adding to the 15 million followers of Islam living in the EU is a deep-rooted fear among Western populations.

The “War on Terror” and the international obsession with anti-terrorism have certainly played a role in catalyzing European anti-Islamism. Yet the core problem seems to be the failure of traditional models of integration to handle ever-growing South-to-North migration in this age of globalization. While the French are still clinging to the assimilation model, a legacy of its colonial past, Geert Wilders is warning the Netherlands about the dangers of cultural relativism and declaring point blank the inferiority of Islamic culture. In the same way that it’s failing to offer a clear alternative to neoliberal hegemony in economic policy, the social democratic left remains unable to propose a concrete alternative model of integration based on genuine multiculturalism.

Europe must make a choice. It can hold onto its antiquated model of Christian-inflected secularism. Or it can make space for new peoples and cultures, and become stronger and more vibrant as a result.

Jeanne KayJeanne Kay is a student at Antioch College, a former intern at Institute for Policy Studies, and a contributor to Foreign Policy In Focus.