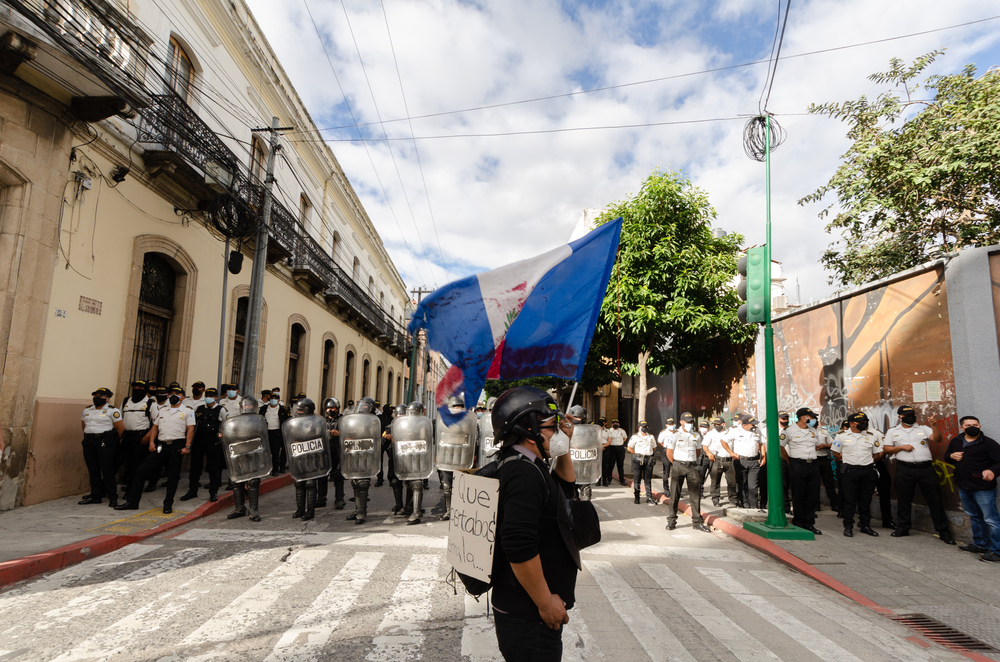 In the face of extractive industries' enormous economic clout, Central Americans are facing increasing displacement and threats to their democratic rights.
By Manuel Perez-Rocha | July 14, 2021

We are increasingly seeing this in the Northern Triangle of Central America, which includes Honduras, Guatemala, and El Salvador. The people of these countries are facing dispossession and forced displacement to clear the way so the extractive and agro-industrial model can thrive.

Global Witness has documented that 14 Honduran and 12 Guatemalan land and environmental defenders were killed in 2019 alone.

In Guatemala, a new law would make such activists even more vulnerable. Through a reform of an existing law regulating non-governmental organizations’ activities, the government is acting to protect the interests of economic elites.

As a letter organized by the Network in Solidarity with the People of Guatemala (NISGUA) and allied organizations points out, the new law grants the Guatemalan government the authority to permanently shut down any NGO if their activities are considered to violate “public order.” This vague language could be exploited to suppress freedom of expression and peaceful protests.

This reform will also reinforce a clause in the Central American Free Trade Agreement (CAFTA) — and found in virtually all free trade agreements and bilateral investment treaties — that requires governments to provide “Full Protection and Security” to foreign investors, including police protection.

The U.S. mining company KCA sued Guatemala for $400 million under this clause, falsely claiming that the government failed to protect its gold mine from the resistance of local communities to protect their water resources and their peaceful sit-in at La Puya.

These repressive measures in Guatemala parallel the repression in Honduras, where communities in the municipality of Tocoa have resisted the mining operations of Inversiones Los Pinares, owned by the country’s elites (like the Facussé family) and fueled by transnational capital.

My organization, the Institute for Policy Studies, awarded its 2019 Letelier-Moffitt International Human Rights Award to Tocoa’s Municipal Defense Committee of the Common and Natural Goods, in recognition of their efforts to defend water against the onslaught of extractive industries. The Honduran government responded to this campaign with repression and militarization of the region and arrested 32 environmental activists. Despite the lack of evidence, eight of them remain imprisoned.

Juan Lopez, who received the Letelier-Moffitt award on behalf of the Committee, made powerfully clear that his community’s struggle is part of a bigger international story:

Tegucigalpa, Washington, San Salvador, Bogota, Guayaquil, Guatemala, Santiago, Panama, appear day after day on the front pages of conservative newspapers as the political centers where high-level corruption magnates, through privatization or concessions, hand over airports, highways, educational systems, health, territories of high biological value, men and women workers’ pensions. Every day, they are squeezing our throats and the set of rights and guarantees established in our nations’ outdated constitutions that sleep in the drawer of oblivion, while huge armies of white collars and uniformed facilitate the transit of global merchandise. The eye of the hurricane of world capitalism seems to be the great addiction on which agro-industrial plantations, mining, and other extractive projects are built.

A study by the Central American Alliance Against Mining (ACAFREMIN) confirms that the main threat to the region’s peoples and territories is the imposition and perpetuation of this extractive economic model, often without any consultation with local communities — much less their consent. And now in many cases, these destructive projects are being touted as post-pandemic economic recovery.

The alliance also makes clear that excessive corporate power is a key root cause of migration. They report that many people from this region have had to migrate to escape from persecution aimed at protecting the geostrategic interests of U.S., Canadian, and European corporations.

Citing rights established by the UN Committee on Economic, Social and Cultural Rights, the alliance is demanding “the human right to life, food, quality water and sanitation as a key condition for our peoples to live with dignity.”

To secure these basic rights for all, we must undo the rules that put the interests of corporations above those of people and the planet.

Manuel Pérez-Rocha is an Associate Fellow of the Institute for Policy Studies in Washington, D.C., and an Associate of the Transnational Institute in Amsterdam. Follow him @ManuelPerezIPS.