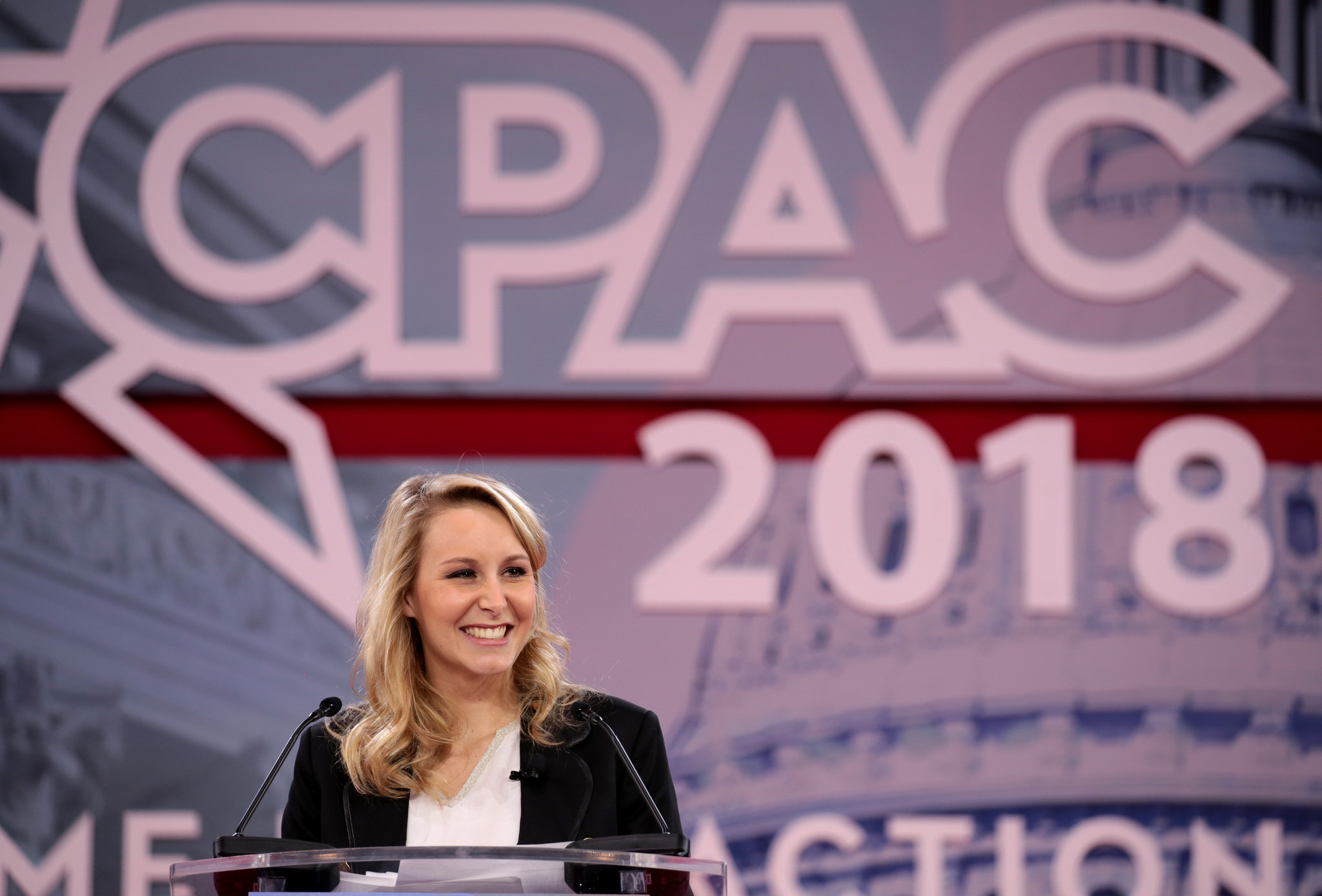 Far more dangerous than the far-right effort to win elections alone is its concerted campaign to change the culture — a strategy it owes, perversely, to the left.
By Juliette Legendre | March 7, 2018

When Marine Le Pen took the reins of her father’s French far-right National Front party, she launched a well-crafted communication strategy to de-demonize the party’s image.

She distanced herself from unsavory associations and condemned the party’s more overtly racist and anti-Semitic elements. She also co-opted some of the lexicon of the left to appeal to the working class, and hijacked liberal values such as “secularism” or “equality” to attack Islam.

Though the party has yet to score major electoral successes, it’s definitely entered the mainstream under Le Pen’s leadership. “The real measure of her success may be less in the polls than in people’s minds,” writes Cecily Alduy, a professor of French studies at Stanford University, in The Nation. The National Front’s ideas are now regularly seen in the media and sometimes considered acceptable within mainstream parties.

A 2014 survey conducted by the Institute of Political Science’s Center for Political Research found that 85 percent of respondents believe that France is in decline, 66 percent think there are too many “foreigners” in France (up from 49 percent in 2009), and 63 percent believe that Islam is incompatible with French society’s values.

The success of Marine Le Pen or Donald Trump and other right wing populists, however, isn’t only due to a change in leadership style, but rather the result of decades of right-wing cultural struggle, shifting the overall political spectrum to the right.

Groups located more on the extreme end of the far right, such as the “identitarian” movement of which Richard Spencer is a part, have also been heavily investing in conquering people’s minds — specifically young men’s minds. And the Internet has made this task much easier for them.

The surprise is that, whether far right activists realize it or not, they owe this metapolitical approach to the left — particularly to Marxist scholar Antonio Gramsci, who pioneered the theory of “ideological hegemony” in the 1920s. Cultural power, Gramsci argued, must precede political power.

Political Shift to the Right

This effort from the far right to win “hearts and minds” is both contributing and benefiting from the global uptick in right-wing populism.

Alt-right leaders were enthusiastic about the election of Donald Trump — “even if they recognize he wasn’t really one of them,” says George Hawley, a political scientist at the University of Alabama and author of Making Sense of the Alt-Right. To a certain degree, they consider Trump and similar political figures in Europe to be “Trojan horses” that help disseminate white-supremacist ideas into mainstream politics under the guise of softer populist rhetoric.

One major concern is that these Trojan horses might go beyond mere populism, as some fascist politicians did in the 20th century. Cas Mudde, an expert on the far right at the University of Georgia, describes right-wing populism as a “thin-centered” ideology that relies on concepts borrowed from “thicker” ideologies such as nationalism. It is not a coherent ideology, but rather a fluid and transitory phenomenon.

Today, in many European countries, several far right parties that were once operating on the margins are now participating in mainstream politics. Germany, the Netherlands, France, and Italy have been the latest victims of this phenomenon. A far right party has entered the German parliament for the first time since World War II, the Dutch Freedom Party and the French National Front came in second in national elections last year, and a center right-far right alliance appears to have triumphed in the Italian general election.

In Central and Eastern Europe, the situation is even more worrisome. Austria, Poland, and Hungary are now governed by right-wing nationalists who are promoting strict anti-immigration policies and dangerously undermining democratic institutions. In recent months the European Union has been in a standoff with Poland over its latest undemocratic reforms granting greater power to the Polish executive branch over the judiciary.

But besides increasing political gains, the real victory for far-right activists is the shift of the public discourse further to the right. This is part of their “metapolitical” strategy, claims Joe Mulhall, a senior researcher at Hope Not Hate, an advocacy group based in the United Kingdom:

Across Europe and America, the alt-right political project is not based on winning elections. It is a metapolitical approach. It’s about changing the course of society through its culture and through expanding the window of acceptability around the issues that are interested in race, identity, etc.

The European New Right (ENR), or Nouvelle Droite, a pan-European far-right school of thought that originated in France in the late 1960s, has been a source of ideological inspiration for the far right in Europe and more recently in the United States. ENR thinkers typically oppose liberal democracy, multiculturalism, and socialism alike.

The main leader of the movement is the French intellectual Alain De Benoist. And what is striking is that De Benoist learned from his enemy, finding inspiration in the work of Italian Marxist Antonio Gramsci and his writings on “cultural hegemony.”

Gramsci argued ideological wins precede political wins. He understood that Marxists were failing to overthrow the bourgeoisie because they hadn’t gained control of the culture. The support of the people must be gained first, Gramsci argued, and the best way to achieve that is to slowly change their ideas, values, culture, and worldview.

De Benoist interpreted Gramsci’s writings through a far-right lens and advanced this notion of “right-wing Gramscianism” which targeted the universalist and egalitarian values of liberalism and socialism.

Through a think tank called the Groupement de Recherche et d’Etudes pour la Civilisation Européenne (the European Civilization Study and Research Group – GRECE), New Right thinkers have aimed at shaping and cultivating a counter hegemonic conception of the world. They have been publishing intellectual journals and hosting conferences and debates throughout Europe.

They “fundamentally reject the ideals of the Enlightenment and of Christianity, and fight back against the ‘materialist’ ideologies from liberalism to socialism.” Instead, they posit “a pan-European nationalism and a world of ethnically homogeneous communities,” writes Joe Mulhall.

Back in the late 90s, the influence of the New Right was mainly contained within Europe. But in recent years, the American alt right has been finding inspiration in the writings of De Benoist and other ENR thinkers.

Greg Johnson, a leading American alt right figure and editor in chief of Counter-Currents Publishing, has been publishing a North American New Right journal. This movement, he says, “seeks to apply the ideas of the European New Right and allied intellectual and political movements in the North American context” and “to lay the metapolitical foundations for halting and reversing these trends.”

Daniel Friberg is a leading Swedish far-right activist and co-founder of the Alt-Right Corporation with the American white nationalist Richard Spencer. In his recent book The Real Right Returns: A Handbook for the True Opposition, Friberg writes:

Taken in its totality, our metapolitics aims to set an authentic Right in motion; a force which is growing in strength through our own, alternative media channels, as well as through gaps in the censored channels of the establishment. This force, once it reaches critical mass, will live its own unstoppable life, broadening the narrow confines of public discourse in a revolutionary manner and paving the way for a European renaissance.

The Europeans Come to CPAC

That vision was on full display when Marion Maréchal Le Pen spoke at the recent Conservative Political Action Conference (CPAC) in Maryland.

A former member of the French parliament, this younger Le Pen is primarily known for holding even harsher nationalist views than her aunt, National Front leader Marine le Pen, and for her ties to the identitarian movement. Marion stepped away from politics last June and has remained silent since, so when French media discovered she was going to speak at CPAC, they interpreted it as a sign of her comeback on the political stage.

But Marion clarified her that her ambitions were about the cultural stage, not the political one. A day before CPAC, the right-leaning publication Valeurs Actuelles published a profile in which she claims: “The battle of ideas has been won in many ways, but it struggles to transform into electoral victories. In each election cycle, financial resources are scarce and supports are limited. It is on that front that young French conservatives have a major mission to accomplish. I am convinced that our political family must invest more into the field of metapolitics.”

Sure enough, her speech at CPAC focused on the virtue of embracing metapolitics as announced her new project:

Our fight cannot only take place in elections. We need to convey our ideas into the media, culture, and education to stop the domination of the liberals and socialists. That is why I recently launched a school of management and political science to train the leaders of tomorrow, those who will have the courage, the discernment, and the skills to defend the interest of their people.

Broadly speaking, progressive movements in the U.S. and in Europe have failed to offer a “vision that motivates and makes young people excited,” laments Mulhall. And now white nationalists aim to substitute their own alternative.

They are organizing online and offline on both sides of the Atlantic and radicalizing well-educated young men by strategically disseminating their racist worldview. And they’re doing it with the frame of an Italian Marxist who imagined a vastly different use for his ideas.