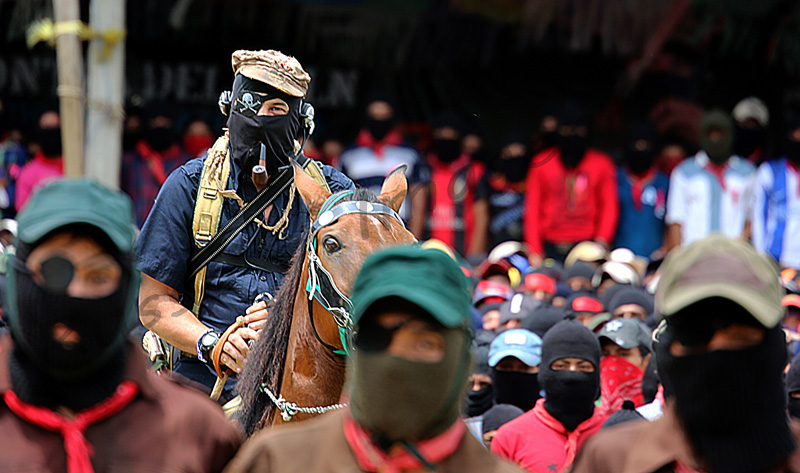 In a lengthy speech, the man known as Marcos denied allegations that he is ill or dead. But he did make a major announcement: he no longer exists.

Finding the figure of Marcos to be a distraction from the goals of the Zapatista Army of National Liberation (EZLN), he explained that the character “was created and now its creators, the Zapatistas, are destroying it.”

Marcos has been replaced with a new nom de guerre — Galeano. The new name memorializes a fallen comrade who was killed in La Realidad in early May. Some have suggested that this is only a change of name, but it is far more than that.

Galeano represents a collective, shared identity. When Marcos took on his new name, he also prompted the crowd to reply — according to the transcript of the speech —“We are all Galeano!”

Rebelling against neoliberalism and the signing of NAFTA, the mostly indigenous Zapatistas fought the Mexican military for 12 days in 1994. They have since turned to peaceful methods of demanding indigenous rights, democracy, and autonomy.

The retirement of the persona of Marcos is consistent with the Zapatistas’ horizontal approach to leadership. The Zapatistas have embraced participatory democracy since they first took up arms against the “bad government” over 20 years ago. In fact, Marcos, believed to be a non-indigenous professor, took the title of “subcomandante,” while indigenous members have been known as “comandantes.”

The elimination of Marcos further blurs the divide between the movement’s leaders and people. It also acknowledges that the media has focused more on the mysterious image of Marcos — typically portrayed on horseback, wearing a balaclava, and smoking a pipe — than the actual successes of the Zapatistas.

And there have been successes. As Laura Carlsen argued in January, the Zapatistas have accomplished two feats necessary for social movements: endurance and regeneration. After 20 years of resistance, new generations of indigenous Mexicans are embracing Zapatismo. Regeneration also comes from abroad, as support for the movement spans the globe.

But most important to the Zapatistas is autonomy. Since the beginning of the movement, numerous autonomous communities have been established in Chiapas. Autonomous Zapatista communities are governed collectively by rotating leaders. They offer women equal rights and provide education and healthcare for all.

Yet the Zapatistas continue to struggle for indigenous rights and better living conditions. The San Andrés Accords between the Mexican government and the Zapatistas, signed by Mexican President Ernesto Zedillo in 1996, have been completely ignored by the government. Poverty still exists, and some critics of the movement believe conditions have only worsened.

Since the election of President Enrique Peña Nieto of the Institutional Revolutionary Party (PRI), some human rights organizations have complained that indigenous rights have become even less of a priority. The pending privatization of Mexico’s oil industry could also add to the struggles of indigenous peoples, with foreign investment leading to greater exploitation of the rural poor for natural resources.

There is certainly a continuing place for Zapatismo within Mexico, not only to ensure indigenous rights, but also to push for greater democracy and economic equality. With the return of the PRI, the Zapatistas’ call for horizontality, plurality, and equality represents a very different path. The Zapatistas without Marcos, however, look very much the same.