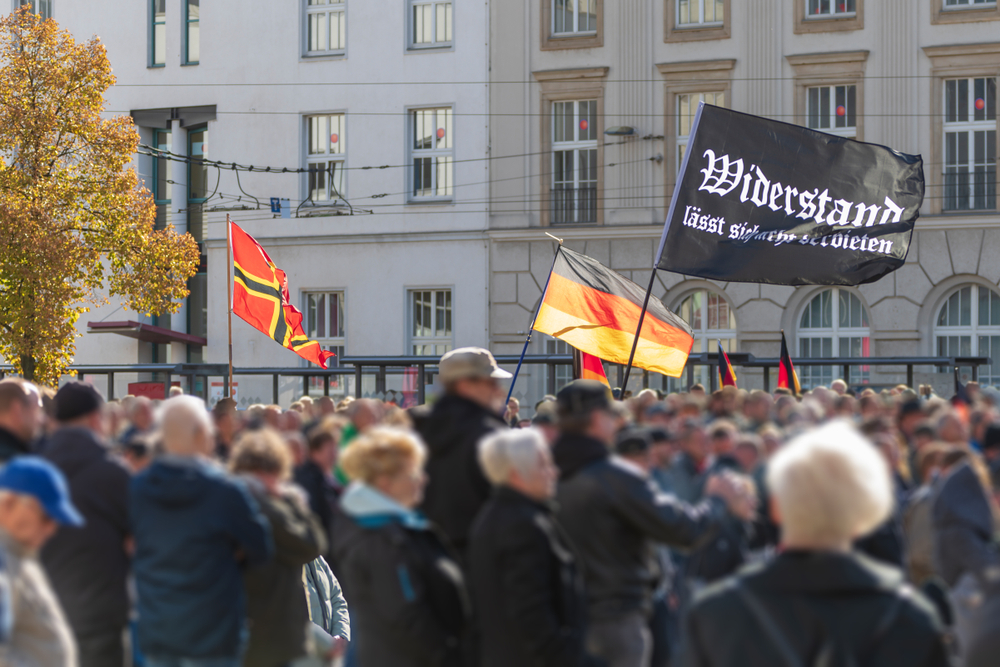 In the world's largest democracies, far-right movements that embrace violence, reject democracy, and target the vulnerable are on the rise.
By Walden Bello | May 5, 2021

The global spread of fascism is real, as real as the spread of COVID-19, and you better believe it.

For purposes of academic analysis, it might be legitimate to distinguish between a “fascist-leaning” movement and a truly fascist one, or a far-right regime and fascist regime, or an authoritarian populist and a fascist. But I am a former member of the Philippine parliament and a street activist. While I have great respect for academics, those of us who operate in the realm of practical politics cannot afford to act as academics.

For me a movement or person must be regarded as fascist when they fuse the following five features: 1) they show a disdain or hatred for democratic principles and procedures; 2) they tolerate or promote violence; 3) they have a heated mass base that supports their anti-democratic thinking and behavior; 4) they scapegoat and support the persecution of certain social groups; and 5) they are led by a charismatic individual who exhibits and normalizes all of the above.

When Mussolini and Hitler were still upstarts fighting to barge into the political mainstream in Italy and Germany, politicians of the left, center, and traditional right dismissed them as oddities who would either disappear or be absorbed into the parliamentary democratic system.

When Donald Trump got elected president of the United States in November 2016, opinion makers — with the exception of a handful, like the progressive filmmaker Michael Moore — were taken by surprise. But most predicted that the office would transform the unpredictable star of reality television into a proper president, one respectful of the customs and traditions of the world’s oldest democracy.

In the Philippines, after warning before our own 2016 elections that Rodrigo Duterte would be “another Marcos,” I wrote two months into Rodrigo Duterte’s presidency that he was a “fascist original.” I was criticized by many opinion-makers, academics, and even progressives for using the “f” word.

How wrong the pundits were in dismissing these personalities as flukes, as they were when it came to others, like Victor Orban in Hungary, Narendra Modi in India, and Jair Bolsonaro in Brazil.

Academics are scornful of what they put down as “loaded terms,” but the consequences of underestimating the threat posed to democracy by fascists are not academic. It would be superfluous to be reminded now of Trump’s almost successful effort to prevent a peaceful transfer of power in the United States by systematically spreading the lie that he lost the elections and instigating a violent insurrection.

But for those who have not followed the career of other persons of interest as closely, let me acquaint you with the highlights of their respective reigns: Five years and over 20,000 extra-judicial executions later, the “f” word is one of the milder terms used for Rodrigo Duterte, with many preferring “mass murderer” or “serial killer.” Modi has made the secular and diverse India of Gandhi and Nehru a thing of the past with his Hindu nationalist project. And Orban and his Fidesz Party have almost completed their neutering of democracy in Hungary.

The United States, India, Brazil, and the Philippines were four of the seven biggest democracies in the world just nine years ago. Today, three of them are led by fascists who are determined to complete their transformation into non-liberal democratic systems. The other barely survived a fascist’s determined effort to hold on to power.

With 11 million more Americans voting for Trump in 2020 than in 2016, 70 percent of the Republican Party believing against all evidence that he won the election, white supremacy emerging as the guiding ideology of the Republican Party, and a coalition of angry extremists open to violent means of seizing power emerging as the party’s driving force, who can deny that American democracy is in intensive care, despite the passage of the presidency to Joe Biden?

I would like to stress three things at this juncture.

First, the features of fascism come together in unique ways. If we are waiting for the ideal-type fascist to make his appearance, meaning a spitting image of Adolf, then we will be waiting forever.

Second, the key features of fascism do not become prominent all at once. They may, in fact, be institutionalized only late in the day, such as Mussolini’s eliminationist policy towards Jews, which he only made law in 1938, 16 years after he came to power.

Trump’s true willingness to openly overthrow the cornerstone of democracy — the peaceful succession of power via majority decision of the electorate — was not on full display until he lost the November 2020 elections. Modi and the BJP’s incendiary views of Muslims were dismissed by many as simply rhetorical excesses until the BJP came to power in 2014. Then began the lynching of Muslims falsely accused of being cattle traders, followed by mob attacks on Muslim ghettos, and the legalization of the social subordination of Muslims.

The third point is that the closer fascists come to power, the more some of them feel they must put on a pretense of respecting democratic processes and values to lull the electorate into believing they’re really not as bad as the liberal and progressive press make them out to be and evince horror at being branded as fascists.

Leaders of the Alternative fur Deutschland (AfD) in Germany have been trying hard to cultivate the image of responsible politicians who can be trusted to behave in a coalition with the Christian Democratic Party, the country’s main traditional conservative party. Fortunately, just when they think they’ve succeeded, someone from their ranks lets the cat out of the bag — like Christian Lueth, formerly the press spokesperson of AfD, who recently slipped and publicly assured a right wing blogger on the question of migrants, “We can always shoot them later, that’s not an issue. Or gas them, as you wish. It doesn’t matter to me.”

How can one deny that there is a fascist resurgence if one were to do even just a brief survey of today’s Western and Central Europe, which birthed fascism in the first half of the 20th century and has again become its fertile soil in the second decade of the 21st century?

From having no radical right-wing regime in the 2000s, except occasionally and briefly as junior partners in unstable governing coalitions as in Austria, the region now has two solidly in power — one in Hungary, the Orban government, and one in Poland, the Peace and Justice Party. The region has four more countries where a party of the far right is the main opposition party. And it has seven where the far right has become a major presence both in parliament and in the streets.

Seeding the Ground for Political Success

It would be myopic to judge fascism’s resurgence only in terms of its political success. The spread of fascist ideas is much faster than the pace of its electoral successes and, indeed, seeds the ground for its eventual political success. Racism, white supremacy, promotion of violence, conspiracy theories — such as Muslims seducing Hindu girls “in love jihads” to change the demographic balance in India — all spread fast online, become normalized in the echo chambers of the internet, and eventually are legitimized.

Especially alarming for people in the West who think liberal democratic beliefs are too solidly entrenched in their polities to be eroded should be the fact that holocaust denial is now more widespread in Europe than three decades ago, and that in the United States, surveys suggest broad ignorance about the Holocaust among millennial and Gen-Z respondents . These inroads in eroding the collective memory of 20th century fascism’s most diabolical crime must surely count as one of 21st century fascism’s biggest successes.

If you think I am exaggerating, listen to the German authorities, who report that anti-Semitic incidents in Germany in 2020 rose to 2,275, the highest since they started collecting data on politically motivated criminality in 2001. Listen to Charlotte Knobloch, former head of the Central Council of Jews in Germany, who tells us, “Anti-Semitism has become socially acceptable again.” Talk to the German domestic intelligence agency BfV, which has made the unprecedented request to the judiciary to place the AfD, Germany’s biggest opposition party, a hotbed of both Islamophobia and anti-Semitism, under scrutiny as a suspected fascist organization.

Especially targeted by fascists today are non-white migrants. Now, just because an individual is anti-migrant does not mean he or she is a committed fascist. The problem is anti-migrant attitudes today are bound up with support for repressive moves against them, like drastically limiting asylum to political refugees, deporting large numbers of them as “criminals” or “national security risks,” physically breaking up their communities under the pretext of “assimilation,” and denying them fundamental human rights, like the right of parents and children to stay together, which the Trump administration violated in the case of Central American and Mexican migrants.

The most vulnerable groups, like migrants, are the first targets of fascists, but you can be sure they won’t stop with them. As Pastor Niemoller’s celebrated poem reminds us, you only think you’re safe until they come for you and “there won’t be anyone left to speak” for you.

The beast is struggling against its chains in Germany. It has bared its fangs in Washington, D.C. It has shed blood in the Philippines and India. Let us not repeat the mistake of the democracies of the early 20th century of hesitating to call that beast by its name.

FPIF commentator Walden Bello is co-founder of Focus on the Global South and a professor at the State University of New York at Binghamton. This article is adapted from the author’s opening speech at the Cambridge Union debate on the resurgence of fascism on April 29.