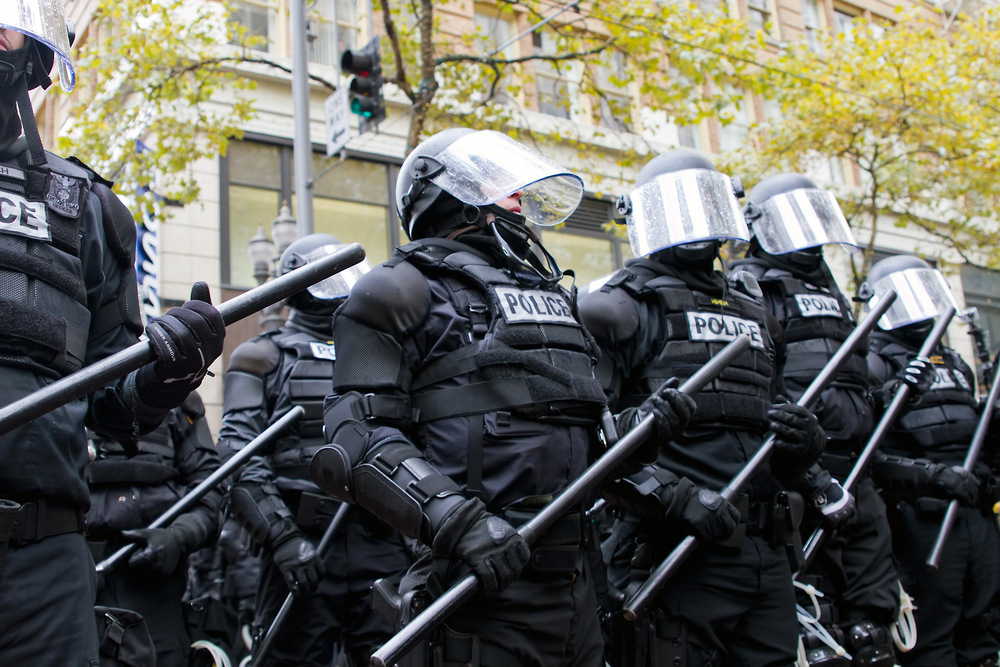 Trump’s use of federal paramilitaries is a classic tactic of autocrats to test how far they can push their authority in opposition-controlled regions.
By John Feffer | July 22, 2020

Federal agents poured into Portland, Oregon this month to crack down on anti-racism protests. They beat up peaceful protesters and fired impact munitions at demonstrators, seriously injuring one of them. They drove around the city in unmarked vans pulling people off the street.

Oregon officials at every level — the city, the state, and congressional representatives — have demanded that these agents of the Department of Homeland Security, the U.S. Marshals Service, and other federal authorities leave Portland immediately. The state has even filed suit against these federal agencies. The ACLU calls it a constitutional crisis.

President Trump is doubling down, not backing down. He says that the paramilitaries are there to restore order. The Feds are preparing to descend on Chicago, and Trump is also warning Philadelphia and New York that they’re next. “Look at what’s going on — all run by Democrats, all run by very liberal Democrats. All run, really, by [the] radical left,” Trump said. “If Biden got in, that would be true for the country. The whole country would go to hell. And we’re not going to let it go to hell.”

Halfway around the world, meanwhile, the Russian authorities arrested Sergei Furgal, the governor of the far eastern city of Khabarovsk, on charges that he orchestrated the murder of two men 15 years ago. Over the last week, tens of thousands of people have demonstrated on the streets of Khabarovsk demanding the release of this leader of the opposition to Russian President Vladimir Putin. Furgal and his supporters argue that the arrest is politically motivated.

In Hong Kong, authorities are using a new national security law criminalizing many forms of protest to arrest several pro-democracy advocates, including the politician Tam Tak-chi, who was expected to run for the legislature in the September election. The action put an immediate damper on opposition efforts to select candidates for the vote. From Beijing, the Chinese Communist Party is cracking down on any challenges to its authority from the periphery, whether in Hong Kong, Xinjiang, or Tibet.

Analysts of the new authoritarian wave that has swept across the world in the last few years have largely focused on power grabs in capitals. Leaders like Donald Trump, Vladimir Putin, and Xi Jinping have attempted to reduce the influence of legislative and judicial bodies in favor of their own executive power. They have targeted civil society and media. They have used the coronavirus crisis to consolidate their control.

An equally important feature of this new authoritarianism is its intolerance for regional or local power bases that lie beyond executive reach. For countries that have federal structures, this means a conscious effort to strengthen the federal center at the expense of the regions. It’s part of the remaking of the nation-state in the 21st century, a reversal of the two-edged trend to devolve power to local authorities and delegate authority to international institutions.

These nationalists don’t just hate globalists. They hate anybody who stands in their way, including just about any potential counterforce taking shape on the periphery.

Trump and the New Civil War

You might think that Donald Trump’s embrace of the Confederate flag and Confederate generals is just an overture to his white nationalist supporters. It’s all that and more.

Trump and his strategists are very consciously pitting states against each other in a replay of the pre-Civil War conflict over federal authority. Trump and his allies in predominantly red states want to reopen the U.S. economy as quickly as possible, and he also wants to preserve the “freedom” of Americans to refuse to wear protective masks in public. This strategy echoes the arguments of southern states in the late 1850s to maintain their economic system without federal interference and to have the “freedom” to own slaves.

Of course, the analogy is complicated by the fact that Trump is the head of the federal system.

However, Trump disagrees with the public health authorities associated with the U.S. government who support mandatory mask use. The president demonstrated his support of Georgia Governor Kemp, who unilaterally voided requirements to wear masks in Atlanta and other cities, by touching down unmasked in the state capital. Trump also backs those governors who reopened their economies prematurely and are reluctant to shut down again now that the virus has returned with redoubled strength.

The battle is shifting to a showdown over reopening public schools. Trump has ordered students to return in person for the upcoming school year, which will begin in some places next month. He has even threatened to withdraw federal funding from schools that don’t reopen.

But the coronavirus is surging out of control in some states, including Florida, which is adding more than 10,000 new cases a day. If Florida were a country, it would be the eighth hardest hit nation in the world. Only three countries are adding as many new cases of infection daily. And yet the governor of the state, Republican Ron DeSantis, is moving full speed ahead to bring children back to the local virus incubation centers otherwise known as schools.

Trump might not have the public health agencies on his side. And the military balked at the president’s plan to send soldiers out onto the streets to suppress public protest.

But the president has discovered that he still controls the security forces attached to other federal agencies. He deployed the National Guard in D.C. to tamp down protests last month, prompting a demand from the mayor of the nation’s capital for the president to withdraw the forces. Agents from both Immigration and Customs Enforcement and Customs and Border Protection were also used to police the demonstrations in the wake of the killing of George Floyd.

Now Trump is claiming that areas of the country under Democratic Party control are in fact swamps of anti-Americanism. He is deploying the classic vocabulary associated with dehumanizing America’s putative enemies prior to attack. This is no longer a conflict between red and blue. Trump is transforming America’s political divide into an existential battle between grey and blue, where the Feds are supporting a Confederate-friendly president and the rebellious states long for the return of a more perfect Union.

Trump’s use of federal paramilitaries is a classic tactic of autocrats to test how far they can push their authority and what forces they can count on in an emergency. The Black Lives Matter protests inadvertently provided Trump with that opportunity. Come election time, he’ll know which guns are on his side if he chooses to question the election results and stay in office.

Autocrats fear the periphery. It’s where dissent can germinate beyond the prying eye of the panoptical state. East Germany’s revolution in 1989, for instance, began with demonstrations every Monday in the southern city of Leipzig. The Romanian revolution a few months later was sparked by the Hungarian minority in Timisoara. The overthrow of Slobodan Milosevic in Serbia in 2000 began with protests by miners in Kolubara, an hour’s drive from Belgrade.

Federal states face a continual tension between center and periphery that occasionally breaks the country apart (as with Yugoslavia and the Soviet Union). The Spanish government cracked down on Catalan moves toward independence in 2017, imposing direct rule for a time. Ukraine, Moldova, and Georgia have all faced secession movements that have resulted in autonomous regions that claim statehood. Occasionally, breakaway regions achieve international recognition as states — Bangladesh, East Timor, South Sudan.

This is why Xi Jinping fears Hong Kong, Vladimir Putin worries about Khabarovsk, and Donald Trump wants to stamp out dissent in Oregon. But it’s also why Recep Tayyip Erdogan has replaced the mayors of cities affiliated with the pro-Kurdish opposition party. It explains why Narendra Modi has made it more difficult for state governments, particularly those led by the political opposition, to raise revenue. It’s why Jair Bolsonaro has clashed with the governors of Brazil’s states over their respective handling of the coronavirus.

The new nationalists have defined “the people” in very specific ways to exclude portions of the population based on ethnicity, religion, or politics. They are transforming the federal government into a tool to reward only those who support the ruler in the capital. They are attacking democracy, yes, but also reducing faith in governance more generally. What better way “to deconstruct the administrative state,” as alt-right guru Steve Bannon likes to say, than to turn the government into a body with no power beyond its military and police.

The coronavirus and the economic downturn have brought the United States to its knees. But Trump also helped to hobble the nation. Now he wants to deliver the knock-out blow all by himself.