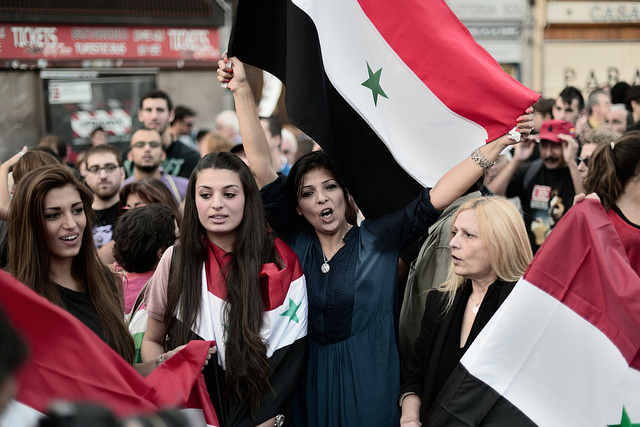 On the Fence about Syria? Read This!

A quick reader on why military intervention in Syria is a big mistake--and what we should be advocating instead.
By Peter Certo | September 6, 2013

Some progressives remain conflicted about how the United States should respond to Syria’s increasingly violent civil war. This internal division has only deepened as the Obama administration considers launching a military strike on Bashar al-Assad for an alleged chemical attack by regime forces on civilians last month.

Many progressives are rightly skeptical about involving the United States in yet another war in the Middle East, but others are increasingly convinced that only a U.S.-led military strike can check Assad’s well-documented brutality. In recent weeks, many leading progressive commentators, members of Congress, and ordinary citizens have reluctantly come to this conclusion.

But it’s a mistaken one. However well intentioned this effort may be, there’s no evidence to suggest that the “quick and surgical” strikes proposed by the Obama administration will meaningfully change Assad’s behavior. But there’s ample reason to conclude that they could make things much worse.

For progressives who are on the fence about this issue, here’s a quick reader on why military intervention is a mistake and what we should be advocating instead.

We can’t escalate this war.

Let’s start with something I hope we can agree on: we really, really don’t want to escalate this war.

The Assad regime is surely brutal, but make no mistake: this is a civil war, not a one-sided slaughter. Earlier this summer, the Syrian Observatory for Human Rights estimated that 43 percent of the 100,000 Syrians thought to have died in this conflict were fighting for Assad, surpassing estimates for both noncombatants and anti-regime forces.

And although some of those anti-Assad forces originally sprung up to protect the nonviolent protesters being gunned down by the regime, they have since been eclipsed by al-Qaeda-affiliated groups like the al-Nusra Front and the Islamic State of Iraq and the Levant (ISIL). In addition to committing serious human rights abuses of their own and establishing Taliban-style fiefdoms in their areas of control, many of these fighters belong to the same Sunni extremist groups the United States fought for nearly a decade in Iraq. If a U.S. attack on Assad changes the balance of the war, these are the groups best positioned to gain from it. (And for anyone who thinks they’ll return the favor with gratitude, recall that Osama bin Laden himself was among the mujahedeen fighters that Washington supported against the Soviets in Afghanistan.)

Syria’s civil war has already spread into Iraq and Lebanon, with fighters on all sides of the conflict carrying out car bombings and waging pitched gun battles in the streets. A large-scale U.S. bombing campaign could push more fighters and refugees into these fragile states, destabilizing them further and potentially dragging the United States—as well as major Assad backers like Russia and Iran—into a tailspin of regional turmoil.

Military intervention could have other unintended effects as well. When NATO intervened in the Serbia-Kosovo war in 1999, for example, both sides accelerated their ethnic cleansing campaigns. And after NATO forces joined the war in Libya, anti-Gaddafi fighters launched a terrifying campaign of racial violence against dark-skinned Libyans thought to be loyal to the regime. (And then there was that whole Mali thing.)

But what about a limited, “surgical” strike?

Say the United States only launches a quick cruise missile strike on the 36 military targets the Pentagon is thought to be eyeballing. What happens next?

One possibility is that Syria would retaliate. As Phyllis Bennis and Scott Charney have pointed out, there are U.S. forces all over the region—in Afghanistan, Kuwait, Jordan, Qatar, Bahrain, and elsewhere—that could be vulnerable to attack from Syria, Iran, or one of their proxy groups. If Iran gets involved, it could target U.S. ships in the Persian Gulf or close the Strait of Hormuz, through which much of the world’s oil passes. If any of this happens, the United States could instantly be dragged into a larger war that would become immeasurably more violent.

Suppose Assad doesn’t strike at the United States but continues using chemical weapons (assuming he actually has already). Does Washington keep bombing—unavoidably killing civilians and potentially rallying some Syrians around the regime—until he stops? Even if he swears off chemical weapons categorically, civilians on all sides of the conflict will still die in droves from conventional attacks. The only meaningful change will be an elevated risk for escalation.

The Wilson Center recently put together a great short list of four “quick military strikes” that had long-running consequences. Remember when Ronald Reagan bombed Libya in 1986? Two years later Libyan agents blew up Pan-Am Flight 103 in retribution. And Bill Clinton’s 1998 strikes on Afghanistan and Sudan? These helped precipitate the al-Qaeda attacks on the USS Cole and eventually the World Trade Center. All of these led to much larger-scale wars later on. Obviously there were other factors in each case, but the point is that the United States can’t just dunk its toes in the water without getting wet.

But don’t we have to enforce the international norm against chemical weapons?

Yes. But here’s the awkward part: the United States actually has a long, painful, and surprisingly recent history of its own with these weapons.

Declassified documents, for example, recently confirmed Washington’s long-suspected cooperation with Saddam Hussein’s chemical attacks against the Iranians during the Iran-Iraq War. And more recently, reports out of Fallujah, Iraq—where the United States used white phosphorus and potentially depleted uranium during a large-scale assault in 2004—have shown spikes in cancer rates and birth defects outpacing even Hiroshima’s after its nuclear holocaust. This doesn’t mean the United States doesn’t have a responsibility to act, but it does suggest that the international norm against the use of these weapons has survived some pretty grievous abuses already.

More to the point, there’s another norm we need to be upholding here, and that’s the international prohibition on unilateral military action. Since Syria has not attacked the United States and the UN Security Council hasn’t authorized any international military action, a U.S. strike on Syria would be unambiguously illegal under international law. Even with the best of intentions, enforcing a humanitarian norm with an illegal war is a lousy way to uphold international justice.

If we fail to act here, won’t that give Iran a green light to develop nuclear weapons?

Nuclear weapons, as Maysam Behravesh has written, are a response to insecurity. No country that decides it really needs nuclear weapons will wait for Washington’s clearance.

Look at the region from Iran’s perspective. Washington garrisons warships and thousands of troops to Iran’s south and southwest, sells weapons to its Sunni enemies across the Gulf, and supplies its main regional rival—Israel—with billions of dollars each year in military aid. And in the last decade alone, Iran has seen the United States invade and occupy countries on both its eastern and western borders. If Washington also attacks Syria, Iran’s most important ally in the region, Iran will be more likely—not less—to decide it needs a nuclear deterrent.

Moreover, the timing couldn’t be worse. Iran just elected a relatively moderate new president who campaigned on establishing a more cooperative relationship with the West. If the United States and Iran get into a proxy war in Syria, you can kiss those negotiations over its nuclear program goodbye. (In fact this is exactly what some neoconservatives want.)

Now is actually the perfect time to redouble efforts to engage Iran, whose president—no doubt remembering Iraq’s use of chemical weapons against Iranians—recently condemned Syria’s alleged use of sarin gas.

So what can we do instead?

To someone with just a hammer, they say, every problem looks like a nail. Same goes for superpowers and their militaries. Fortunately there’s a lot more in our toolkit than that. Check out Phyllis Bennis’ great piece on Al Jazeera for a full list.

Among other options, Phyllis writes that the United States can call for a second UN investigation team to determine not only whether chemical weapons were used, but also who used them. And better still, if the U.S. Senate ratifies the International Criminal Court—the international body charged with prosecuting war criminals—it will be much better placed to eventually prosecute the culprits for the attack. The lack of a bombing campaign now doesn’t mean that these criminals won’t have to account for their actions later.

Most importantly, instead of butting heads with the Russians and trying to get UN authorization for a strike on Syria, the United States needs to engage directly with the parties arming the belligerents in Syria to negotiate a full international arms embargo. That includes principally Russia and Iran on the pro-Assad side and Turkey, the Gulf States, Europe, and the United States on the anti-Assad side. Especially among its allies, the United States has considerable leverage in terms of withholding arms sales and other assistance to extract concessions. Until these parties reach a deeper understanding of each other’s regional interests, they’ll continue to use Syria as a proxy battleground.

It’s a tall order, but with neither the rebels nor the regime able to break the stalemate, there’s not much other hope for a solution. An encouraging piece in Foreign Affairs suggests that “leaders in Damascus could offer amnesty to the rebels to initiate negotiations for a formal cease-fire, which would include international monitoring and peacekeeping troops. That would create the space to begin a slow, deliberate process of formal mediation that addresses all of the major conflict issues. Mediation ought to involve third parties and all the major factions of the opposition. Of peace agreements that have met those conditions, less than five have failed in the last 25 years.”

And don’t forget: many, many Syrians are desperately in need of humanitarian aid. The UN estimates that this war has turned over 2 million Syrians into refugees, and international aid has fallen far short of what’s required to help them.

But won’t our “credibility” suffer if Obama doesn’t intervene like he said he would?

Look. There’s nothing worse for your credibility than making a huge mistake just because you promised something you shouldn’t have. Better that Obama learns to speak more carefully than the rest of us learn—again—that we can’t bomb our way to a more peaceful Middle East.

What can I do?

Sign a petition. Call your representative. Get out in the streets.

United for Peace and Justice is compiling a running list of places where people are gathering to oppose this war. CREDO Action, MoveOn, and Avaaz have drawn up antiwar petitions, and the Friends Committee on National Legislation has all the information you need to contact your member of Congress.

And if it helps, you can share this article with any of your friends who are on the fence.

Peter Certo is the acting editor of Foreign Policy In Focus. FPIF assistant editor Julia Paley, FPIF intern Sina Toossi, and several others contributed helpful thoughts during the development of this piece.