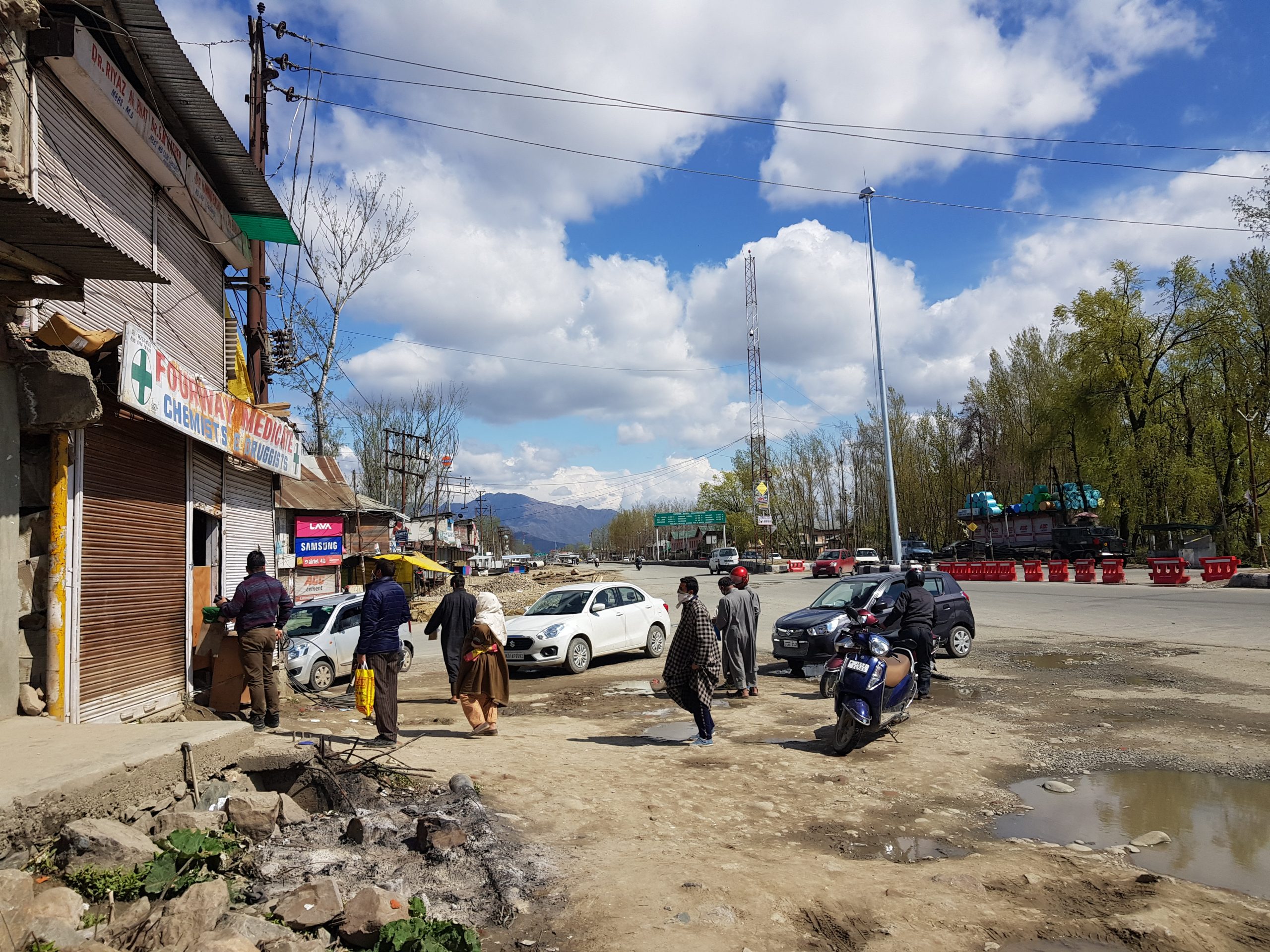 Residents line up outside a medicine shop in Indian-administered Kashmir. (Photo: Bilal Hussein)

Fighting Covid-19 — And Repression — in Kashmir

The Indian government’s repression of doctors and restrictions on the Internet could make the pandemic far deadlier in the formerly autonomous region.
By Bilal Hussain | April 14, 2020

As the coronavirus pandemic spreads to India, Indian-administered Kashmir — home to 7 million people and under lockdown by the Indian government — is already experiencing among the highest density of cases of any area in the country.

In Kashmir, the pandemic is unfolding against a backdrop of political repression. Since the Indian government abrogated Article 370 of the Indian constitution last August, which provided for Kashmiri autonomy, it has directly administered the region and deposed its elected representatives. Three former chief ministers of the state were detained, with one still under house arrest.

That repression puts doctors in a bind. The government has threatened local doctors, warning that criticism of “government efforts to control pandemic” in “uncalled for media reports” could get them sent to prison.

This order came after doctors in the Kashmir valley expressed their concern over poor infrastructure and a shortage of manpower and equipment.

Local doctors have also charged officials with abusing a senior doctor and complained over the government’s termination of 250 nurses amid the pandemic.

Complicating matters, restrictions on internet use in Kashmir are making it far more difficult to practice medicine. Doctors say they are unable even to download critical documents and videos regarding basic COVID-19 safety guidelines and other relevant information, like guidelines for intensive care management.

Journalists too are bearing the brunt of the government’s communications lockdown. “Journalists in Kashmir are solely dependent on the government tweets for COVID stories,” a local journalist complained. “There is no official who picks phone or answers questions. Doctors and health workers are told not to talk to media. Where shall journalists go?”

It’s been over 250 days since high speed internet on cellular services was cut in the region, which is causing enormous difficulties across all aspects of Kashmiri life. A group of 37 national media unions from South Asia recently called for an end to the ongoing communications blockade there.

IFEX, a global network defending and promoting free expression, said in a statement: “Journalism is vital to stop the spread of fake news, myths, and sensationalized stories, at a time when verified information put out by professional journalists in credible media houses could make the difference between life and death.”

“To wilfully deny normal Internet services to millions of Kashmiris in the midst of a devastating pandemic is a crime,” added Kashmiri author and journalist Mirza Waheed. “Only the callous hearted will defend such an inhuman policy.” He added, “It’s important to remember that this is a state that has invested millions in brutal ‘non-lethal weapons’, surveillance tech, invasive monitoring, and gargantuan military infrastructure to keep an entire population subjugated.”

Not all is gloomy, however. In a novel initiative, three young boys from Kashmir have developed a website — covidkashmir.org — for tracking COVID-19 cases in the region. “Developing and maintaining covidkashmir.org on a 2G network has been a difficult task,” they said. “Not only was it restrictive on our choice of technologies, but also posed a challenge of keeping the website small enough so that it loads on 2G properly.”

To expand the effort, they’ve embraced open source platforming. “Our website is completely Open Source,” they said, “enabling not only us three to collaborate easily, but also allowing others to contribute. Open Source also allowed us to keep our costs low.” Netlify, a San Francisco-based cloud computing company and a leading supporter of Open Source technology, helped covidkashmir.org by providing the developers with premium features for free.

In a recent development, the Supreme Court of India has asked New Delhi to reply to a plea filed by the Foundation for Media Professionals calling for the restoration of normal internet services in the region, especially during the COVID-19 outbreak. The plea said that the restrictive internet speed has made it all but impossible for doctors to use telemedicine and video consultation in the pandemic.

Will the government of India finally loosen these restrictions? To contain the outbreak and save lives, it should.

Bilal Hussain is a freelancer and columnist based in Kashmir. His principal interests are press freedom, Kashmir, and conflict economy. Find him on Twitter at @_hussainbilal.