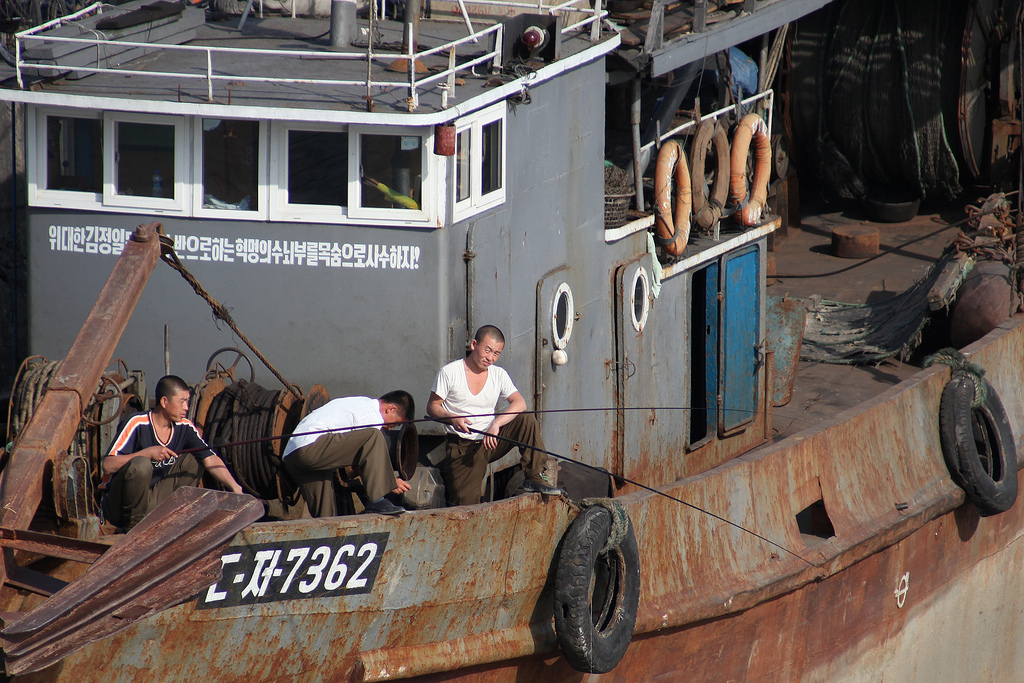 Fishing for Peace in Korea

A cooperative approach to the environmental damage done by overfishing could change the tenor of North-South relations in Korea.
By John Feffer, Michal Witkowski | November 5, 2014

Environmental problems, by their nature, don’t respect borders. Air and sea pollution often affect countries that had nothing to do with their production. Many extreme weather events, like typhoons, strike more than one country. Climate change affects everyone.

These environmental problems can aggravate existing conflicts among countries. But they can also bring countries together in joint efforts to find solutions. A case in point is the Northern Limit Line (NLL) in Korea.

The NLL is the oft-disputed border between North and South Korea in the Yellow Sea off the west coast of the peninsula. Although the two countries agreed to a territorial boundary at the 38th parallel following the Korean War armistice, they have never agreed on the maritime boundary in the Yellow Sea, which threads between a number of islands and through rich fishing grounds. Over the years, North and South Korea have exchanged artillery fire across the NLL, and naval vessels as well as fishing boats have clashed in the area on a number of occasions.

Various environmental challenges have only sharpened the conflict. But with a new imperative to address these environmental problems, the NLL can offer the two Koreas an opportunity to chart a new relationship for the 21st century.

Anatomy of a Dispute

The NLL region has been a zone of contention between North and South Korea for more than six decades. It has been the site of several clashes between the Koreas. Among the most notable are the naval confrontations of 1999 and 2002, the 2009 gunboat incident near Daecheong Island, the 2010 artillery shelling of Yeonpyeong Island, and the sinking of the Cheonan, a South Korean navy ship.

This maritime border is heavily militarized. North Korea maintains six naval squadrons there. According to South Korea’s National Intelligence Service, the North’s fleet consists of approximately 430 combat vessels—around 60 percent of which are stationed around the coastal borders. Due to the decline of the North Korean economy, the fleet mostly consists of smaller vessels used for covert operations and for escorting fishing boats around the NLL.

The South’s fleet is smaller in numbers, with about 120 ships and 70 aircraft. But it has the military edge, due to the size of the vessels and their technological superiority. It’s further reinforced by the presence of the U.S. Seventh Fleet in nearby Yokosuka, Japan. South Korean troops, along with their American counterparts, carry out annual drills in the region, which always raise tensions along disputed maritime border.

North Korea does not recognize the present border arrangement. Furthermore, the 200-mile Exclusive Economic Zone (EEZ) regime set by the UN—which grants states special resource exploration rights in a sea zone stretching 200 miles from their land borders—cannot be applied in a close-quarter situation such as the NLL. The fishing zones that lie within the NLL are the source of fierce contention between both South and North Korea.

One of the major arguments that North Korea has made around the disputed NLL is that South Korea has access to the majority of fisheries within the current boundaries, while the North occupies far less territory than it potentially could. When the NLL was being drawn up, the international standard for territorial water limits was three nautical miles; by the 1970s, however, 12 nautical miles became the norm. The North’s argument is that the current setting prevents it from accessing neighboring sea areas, which, in Pyongyang’s view, should belong to the North. Such a border set-up fails to acknowledge that small islands, such as Yeonpyeong Island, are not equivalent to continental masses in terms of generating maritime boundaries.

Overfishing and other destructive fishing practices that have continued for decades have had perhaps the greatest impact on the NLL’s environmental situation. Such activities have caused habitat destruction and biomass change in the Yellow Sea.

For instance, due to overfishing between the 1960s and the 1980s, the number of invertebrates and fish dropped by over 40 percent. With the decrease in fish populations, more effort is required to maintain the desired catch capacity, and many commercially significant species have been severely depleted. As a result, the species composition and the relative proportions of the fish found in the region have been altered.

One country alone cannot ensure the region’s sustainability. The trans-boundary nature of these issues requires a cooperative approach.

The nature of the Yellow Sea—and in particular the seabed on which the NLL is located—limits water circulation, increasing the amount of harmful sediments and aggravating the quality of the water. This has decreased the sea’s ability to “cleanse itself,” making the area around the NLL even more vulnerable to pollution and the harmful effects of human activities on land.

Habitat depletion can greatly affect local communities as well as cause problems for the fishing industry. Development projects on the South Korean side have been a major factor in this process. More than 30 percent of marshland fields have been lost in South Korea between 1975 and 2005 due to dam construction, embankment, and dikes. Rice paddy fields have been lost as a result of reclamation and the lowering of water tables in nearby lakes. An ever-increasing market demand for seafood boosts the profitability of short-term-oriented fishing activities. Insufficient pollution prevention only aggravates the situation.

As a result of the tense security situation and the unresolved border—along with the lack of a peace treaty between the Koreas to formally end the Korean War—any sort of consensus on the matter of the NLL in the context of inter-Korean relations is difficult to achieve.

One proposed solution is the establishment of a joint fishing zone between the two countries. This zone would boost the North’s fishing industry and could serve as a start to a trust-building process between the neighbours. Such a process would be based on increased economic cooperation in the NLL region that could lead to further improvements in relations and make future collaboration more likely.

The “Sunshine Policy,” a period of North-South engagement in the late 1990s and early 2000s, was an attempt at establishing such cooperation. In the negotiationsregarding the NLL during that period, North Korea demanded changes in the border situation that had to be met before it could agree to participate in the 2007 inter-Korean summit. The South reportedly agreed to this condition. However, the summit failed to bring any real closure to the matter: concrete decisions were left to be discussed in the future.

The overall framework dating back to the Sunshine Policy’s prime is still in place. For instance, the Kaesong Industrial Park—a joint North-South venture on the northern side of the DMZ—is still operational. Ties between the Koreas could be further enhanced by cooperation around the NLL region.

Some ideas have already been put forward and were initially agreed upon by both sides. In 2000, for example, the two countries came to an agreement along the maritime boundary on the east side of the peninsula where South Korean boats shared the profits from their squid fishing in Northern waters. Also in 2000, the two sides agreed to create a special peace and cooperation zone around the west coast of the Korean Peninsula.

Another proposal was to combine a joint fishing zone with a common industrial complex in Haeju, a port city on the Northern side. Finally, the Koreas agreed to establish a “peace sea” from the island of Yeonpyeong right to the estuary of the Han River. No military presence would be allowed in this area. With the South’s withdrawal from the Sunshine Policy framework under the right-wing President Lee Myung-Bak, however, the joint projects were put on hold.

A resuscitation of such joint projects could potentially move cooperation beyond the issue of the NLL to other areas of both business and policy-making.

Two major obstacles would need to be overcome in order for such a solution to work. First, an independent bodyto monitor the area would need to be appointed to prevent breaches of the agreement and to ensure that both parties follow environmental rules. This mechanism would have to recognize the specificity of the issues surrounding the NLL and formulate policies accordingly. Second, the two sides would have to agree on a peaceful dispute resolution mechanism.

A universal solution that can resolve the NLL issue does not exist. A carefully devised policy that takes into account the political and economic tensions between the two Koreas may be the answer. Importantly, the NLL would have to be gradually demilitarized to reduce the probability of any unwanted conflicts that could destabilize the area. However, there is minimal possibility that the two countries will agree to reduce their military positions given that the two countries signed the armistice nearly six decades ago but never agreed on a peace treaty. Thus, for such a solution to become possible, economic cooperation must come first.

Michal Witkowski is a PhD student at Hankuk University of Foreign Studies in South Korea. He works with issues concerning the Korean Peninsula, maritime security, and the environment. John Feffer is the director of Foreign Policy In Focus.