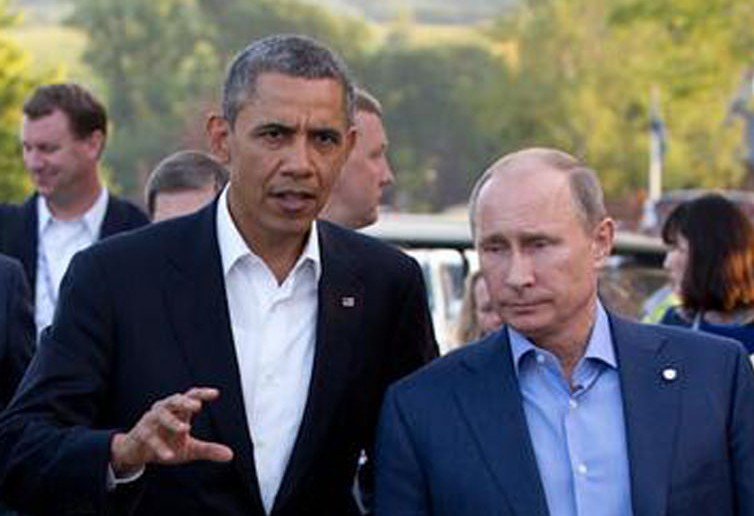 It does nobody any good for the U.S. to paint Russian President Vladimir Putin as a bogeyman. (Image: Global Panorama / Flickr)

A U.S. return to bilateral hostilities with Russia is a costly diversion from both nations’ security needs in a multilateral world.
By Rachelle Marshall | April 25, 2016

It is one of the ironies of history that relations between the U.S. and what was then the USSR chilled into the Cold War while a liberal Democrat, Harry S. Truman, was in the White House. In 1947, two years after the end of World War II, Truman announced what has since been called the Truman Doctrine, a pledge that the U.S. would come to the aid of any country threatened by the Soviet Union.

That doctrine led directly to the formation of the North Atlantic Treaty Organization (NATO), a U.S.-European military alliance that in recent years has stationed troops in a number of Eastern European countries that border directly on Russia. The policy devised by Richard Nixon’s secretary of state, Henry Kissinger, of recognizing the legitimacy of American and Soviet “spheres of influence” in their respective regions was abandoned under the administrations of Bill Clinton and George W. Bush. President Obama has further chilled U.S. relations with Russia.

That fact was noted recently by Admiral Mark Ferguson, the Navy’s top commander in Europe, who said “I don’t think many people understand the visceral way Russia views NATO and the European Union as an existential threat.” Even more disturbing is the fact that so few policy makers observe the cardinal rule of effective diplomacy: that when dealing with a perceived adversary, negotiators should be acutely aware of the other side’s concerns, especially when it comes to security.

So far Obama and one of his foreign policy advisers, Samantha Power, seem as unwilling as their immediate predecessors to recognize Russia’s legitimate apprehensions, or imagine what America’s reaction would be if Russian forces in Mexico moved closer to the borders of Texas. As a result, the low-level tensions between the U.S. and Russia that remained after the end of the Cold War have escalated in recent years as each side in turn made defensive preparations that the other side regarded as offensive.

With NATO forces stationed on Russia’s borders, Russia has responded by sending attack submarines to the Mediterranean and the North Atlantic. According to Admiral Ferguson their number has increased by almost 50 percent this year. Russia has reportedly spent billions of dollars on improved nuclear-powered undersea vessels as well as on building up its nuclear arsenal. The Russians already have some 25 nuclear subs; the U.S. has 53.

The one area in which the U.S. and its allies are vulnerable is under the sea. An attack on the undersea cables that are vital communication lines between nations could paralyze international communication and cause incalculable damage. However, Russia would almost surely suffer as well.

Instead of recognizing the futility of building more nuclear-armed warships — even a minimal nuclear exchange between U.S. and Russian vessels could cause devastating damage — the Pentagon is using the Russians’ effort to catch up with the U.S. to justify building even more nuclear- armed ships.  The Defense Department is asking for $8.1 billion over the next five years for “undersea capabilities” that include nine more attack submarines armed with Tomahawk cruise missiles.

“We’re back to the great powers competition,” Admiral John M. Richardson said recently. The question is whether the Russians will keep the competition going by trying to match the U.S. buildup. It was the expensive arms race with the U.S. that in 1991 forced  Soviet president Mikhail Gorbachev to dismantle the almost bankrupt Soviet Union.

Russia is again in financial difficulties, thanks to plummeting oil prices, but President Vladimir Putin may try to turn the Russian people’s attention away from domestic problems by calling attention to U.S. efforts to dominate the undersea world. If he does so it will be an unfortunate consequence in more ways than one.

With the Islamic State, Boko Haram, and other violent groups wreaking havoc in Africa and the Middle East, and war raging in Syria, Russia and the U.S. would do better to join in a common effort to stop the senseless violence and find a solution to its causes. Instead they are spending billions of dollars on weapons designed to destroy each other many times over. The latest competition is not only a waste, it is an act of insanity.