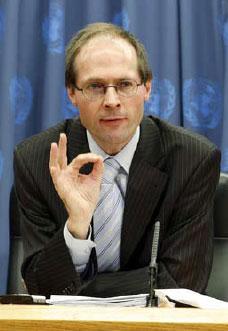 Food security and the WTO

The WTO should stop insisting on an out-of-date trade agenda. It should get back on track -- or get out of the way -- to support fresh approaches that bolster local food systems.
By Karen Hansen-Kuhn | December 21, 2011 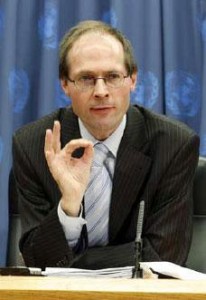 At a World Social Forum event in 2006, Walden Bello warned that the Doha Round of the World Trade Organization (WTO) was careening down a track to disaster. Civil society needed to insist that negotiators pull back before the Round went off a cliff, the founder of Focus on the Global South said.

Although the global economy has certainly changed since then, the WTO seems stuck on the same track. The WTO ministerial last week in Geneva unsurprisingly failed to change course, perhaps most visibly on the issue of trade and food security. In a lively debate WTO head Pascal Lamy and UN Special Rapporteur on the Right to Food Olivier de Schutter highlighted the need for a fresh approach. De Schutter argued that the WTO was holding food rights “hostage.” Lamy, though agreeing that “governments have a sovereign right to pursue policies to achieve food security within their international obligations,” maintained that countries should not limit international trade to achieve this objective.

This tension between trade and food security has emerged as a key dividing line in international negotiations at the WTO. There are, however, ways to transcend this debate and make real progress in feeding hungry people and preserving the livelihoods of farmers.

In 2006, the major issue in negotiations on agricultural trade was dumping — the export of agricultural goods at below the cost of production – and the problems created when floods of cheap imports overwhelmed local farmers and their markets. Developing countries, led by the G33, pushed back with proposals for temporary protections in cases of import surges (Special Safeguard Mechanism) and exemptions for certain goods that were key to food security and rural livelihoods (Special Products). There was strong pressure on the United States and EU to reduce agricultural subsidies and export subsidies, and change other policies that have contributed to overproduction and low prices. As the negotiations dragged on over the next few years, the failure to reach an agreement on agriculture contributed to the ultimate collapse of the talks in 2008.

By mid-2008, dumping was no longer the main problem, because food prices were soaring and food riots were erupting in country after country. This, along with the financial crisis and growing awareness of the looming climate catastrophe, led to a series of dialogues at the local, national, and global levels on how to rebuild fragile food economies and rural livelihoods. The decades-long accepted wisdom that countries should rely on global markets for food supplies was overturned, and countries around the world began to re-invest in national food production. Trade would still remain a component of food and agriculture systems, but it would serve as the backup plan if domestic production fell short, rather than as the foundation of food security.

Nevertheless, the WTO talks have continued to operate as if little had changed, chugging along with proposals to continue to lower trade barriers and to limit support for agricultural production to measures unlikely to distort trade prices and volumes. Calls for the completion of the Doha Round, once a staple of international gatherings of world leaders, have become ever fainter. By the November 2011 G20 meeting, the heads of state stepped back, saying,

We stand by the Doha Development Agenda (DDA) mandate. However, it is clear that we will not complete the DDA if we continue to conduct negotiations as we have in the past. We recognize the progress achieved so far. To contribute to confidence, we need to pursue in 2012 fresh, credible approaches to furthering negotiations…

The lack of fresh ideas contributed to the low profile and low expectations at the WTO ministerial last week in Geneva. Efforts by Egypt and the EU to include some discussion of food security, particularly assurances that emergency purchases by the World Food Program would not be affected by export bans, were dropped just days before the talks. Olivier de Schutter called for measures to reorient WTO rules to remove constraints to the right to food, including the establishment of a protocol to monitor the impact of trade on food prices and a general waiver to exempt food security-related measures from the WTO disciplines without penalty. WTO Secretary Pascal Lamy dismissed his proposals, calling instead for deeper reliance on volatile and unpredictable global markets.

Trade remains a critical issue in global food systems. The question is not between autarky and unrestricted free trade. It is about the nature of the exchanges, who controls the agenda, and what the rules should be. Trade policy is broader than the proposals currently on the table, just as the WTO as an institution will not collapse if the members finally agree to abandon the Doha Round.

Developing countries need rules that provide the policy space to determine the best mix of agriculture and trade policies to support rural livelihoods and food security. It will also be important for developed countries to create the right agricultural policies to prevent dumping and create an enabling environment for a transition to sustainable agriculture and strong rural economies. Payments to EU and U.S. farmers have dropped in recent years as commodity prices have risen, and there is substantial budgetary pressure for additional cuts. Simply cutting spending, however, will not restore stable agricultural markets. A recent study by the University of Tennessee’s Agricultural Policy Center concluded that if the United States had had a reserves program in place during over the last 13 years, expenditures would have been reduced by 40 percent, while farm incomes and prices would have been much more stable. In an era of tight budgets and unstable food supplies, proactive programs for reserves, as well as efforts to curb excessive speculation, could contribute to more stable markets in support of food security.

In view of the deadlock in the WTO talks, governments could take actions now to begin negotiating the terms of a limited role for trade in achieving food security, rather than to continue to advance complete market access for transnational agribusinesses at any cost.

They should, first of all, affirm developing countries’ rights to control their markets to achieve food security. The World Bank, USAID, and other donor institutions have acknowledged that previous policies that undermined local agricultural production and overemphasized the role of the private sector – especially in Africa — were a mistake and have increased spending to rebuild domestic production, processing, and distribution capacity. Continuing to insist on further liberalization of trade is also a mistake. Farmers need clear, predictable signals and support to increase food production and establish stable local markets. Developed countries should explicitly affirm the right of Least Developed Countries (LDC) and Low Income Food Deficit Countries (LIFDC) to exclude Special Products such as rice, beans, and other essential foods from any trade liberalization. LDCs and LIFDCs must be able to take measures to rebuild production and market infrastructure in basic foods free of the threat of retaliation in trade disputes. Those countries should also be explicitly excluded from trade promotion goals pursued by the United States and other developed nations. De Schutter’s proposal for a food-security waiver from WTO commitments could be the basis for such an approach.

New programs can help calm volatile markets. Current WTO rules allow for a certain degree of flexibility to implement food reserves programs, and the G20 recently called for a pilot program to implement emergency reserves in West Africa. This should be expanded to normalize and support countries’ investments in stocks that cushion against disruptions in world markets and global supplies. WTO members should carve out space to support such efforts and develop plans to allow for the establishment of state-owned enterprises to manage such programs. They should also encourage the expansion of agricultural spending in developing countries beyond current limits established in WTO rules.

Agricultural support, meanwhile, can help to promote stable food supplies. Rather than starting from a default position that any subsidy must minimize distortions to trade, definitions of the kinds of subsidies permitted under global trade rules should be carefully revised to best encourage a transition to sustainable agriculture, strong rural economies and adequate food supplies.

Finally, no WTO, Free Trade Agreement or Bilateral Investment Treaty on procurement and investment should conflict with programs to develop healthy local food systems. Both hunger and obesity rates are increasing around the world. The plurilateral Global Procurement Agreement, although limited to 42 countries for the time being, could potentially limit innovative approaches to reform national food systems that include school feeding programs and related initiatives that favor local procurement of fruits, vegetables and other healthy foods. Similarly, investment protections in bilateral investment treaties and bilateral trade agreements could undermine local or national programs to set the conditions for appropriate investments in the production of healthier, more sustainable foods for local markets. Parties to those talks should establish broad exemptions to advance food security and sustainable development.

Rebuilding sound food systems requires a clear look at what is working on the ground, and how to build up from there. Trade is a complement, not a substitute, for national food systems. The WTO should stop insisting on an agenda that was already out of date when it was first broached over a decade ago. It should get back on track – or get out of the way — to support fresh approaches that bolster local food systems.