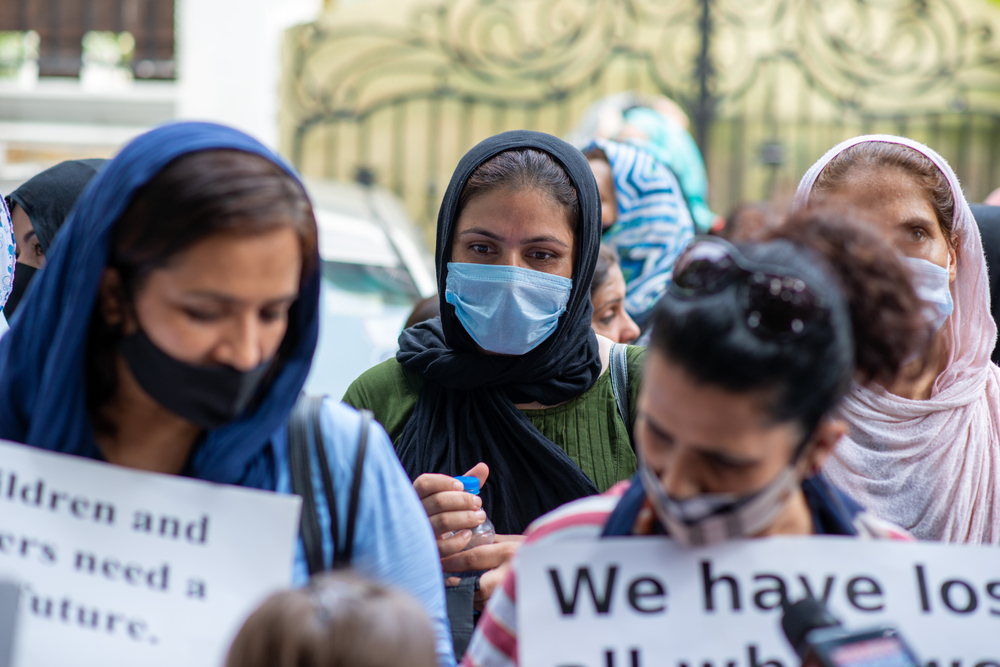 For Afghan Women, the Frightening Return of ‘Vice and Virtue’

The Taliban are going back on their promise to respect women’s rights. What can the international community do?
By Heather Barr | September 29, 2021

There is no better symbol for the disappearance of women’s rights in Afghanistan than the end of the Ministry of Women’s Affairs and the return of the Ministry for Propagation of Virtue and Prevention of Vice. When the Taliban on September 7 announced their new interim government, the vice and virtue ministry featured on the list, with a cleric as its newly appointed minister. The Ministry of Women’s Affairs had disappeared, and there were no women in the new cabinet.

The situation has a feeling of impending doom as a largely unchanged Taliban comes into direct conflict with a generation of young women who grew up hearing about the abuses that the Taliban inflicted on their mothers and older sisters and seizing the opportunities those older women were denied. On a chat group of people who have worked many years in Afghanistan, a journalist friend wrote, “Does anyone else fear these protests are going to end in a massacre?” This possibility seems all too real.

The Ministry of Women’s Affairs was founded in 2001 with a mandate to “implement the government’s social and political policy to secure legal rights of women in the country.” The ministry has often struggled with a lack of influence and resources, but its existence was an important acknowledgment by and reminder to the government of its obligation under international human rights law to ensure gender equality. Afghanistan ratified the Convention on the Elimination of All Forms of Discrimination against Women in 2003.

The Ministry of Vice and Virtue existed during the previous Taliban period, from 1996 to 2001, when it became a notorious symbol of arbitrary abuses, particularly against women and girls.

The ministry ruthlessly enforced restrictions on women and men through public beatings and imprisonment. The ministry beat women publicly for, among other things, wearing socks that were not sufficiently opaque; showing their wrists, hands, or ankles; and not being accompanied by a close male relative. It barred women from educating girls in home-based schools, from working, and from begging. Its officials also beat men for trimming their beards. An effort in 2006 to revive the institution was defeated, but these bodies have operated in recent years in areas under Taliban control.

These last weeks since Kabul fell to the Taliban have been a steady stream of bad news for women and girls. The Taliban, at their initial news conference on August 17, sought to reassure Afghans and the world that they would respect human rights, including women’s rights to gender equality. But even then these assurances were tempered by conditions — women’s rights would be respected “on the basis of our rules and regulations… within our frameworks of Sharia,” or Islamic law, they said.

The Taliban have yet to provide clarity on many questions about how they will rule, but every day brings further evidence that they are implementing a massive rollback of women’s rights:

In the face of these attacks on their rights, women have been taking to the streets, protesting against their exclusion from the government and demanding their rights, including the rights to work and to study. Women have also been leaders in protests focused on other grievances including to support the Afghan flag and in solidarity with the forces fighting the Taliban in Panjshir province. The Taliban responded first by attacking, intimidating, and beating protesters and journalists covering the demonstrations, and then by banning unauthorized protests.

Women and girls are also in the crosshairs of a deepening crisis as Afghanistan faces a major economic collapse. The country’s health system and schools face collapse as donor funding, which paid for those services, has been cut off. Taliban policies on girls education and women’s freedom of movement could become beside the point if essential services no longer exist.

What can be done?

There are steps the international community should urgently take. The mandate of the UN Assistance Mission in Afghanistan (UNAMA) expired on September 17. The United Nations Security Council should renew the mission’s mandate and bolster its capacity to monitor, investigate, and report on human rights abuses in the country, especially violations of the rights of women and girls. Donor governments should strengthen the ability of the UN to deliver lifesaving aid.

The Taliban have made their contempt for the rights of women and girls crystal clear. The question now is whether the international community will treat this situation like the emergency it is and rally to protect Afghan women’s lives.