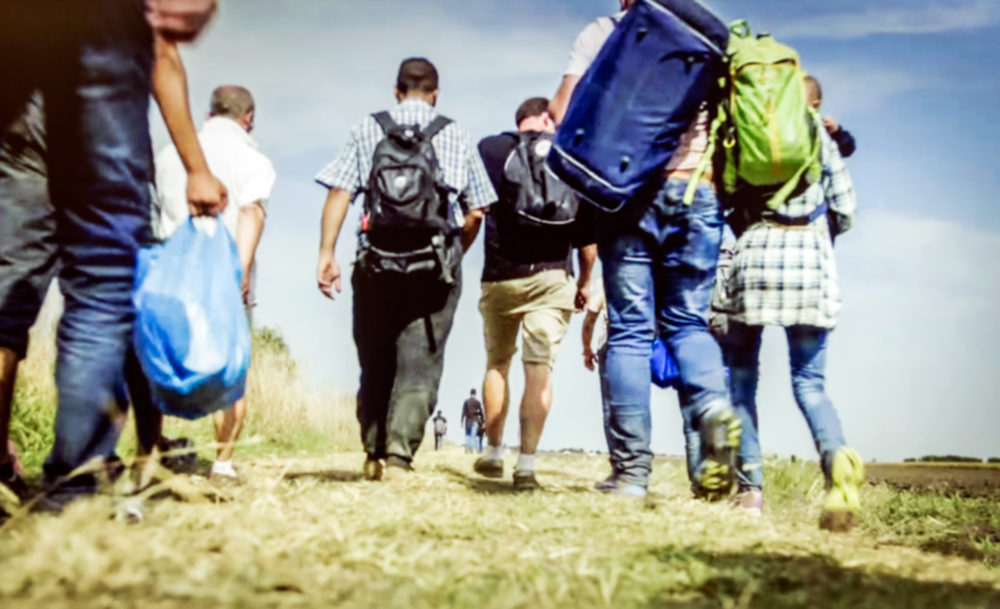 Lawmakers say frontline communities should be at the heart of the Green New Deal. They must include current and future undocumented immigrants.
By Josue De Luna Navarro | August 13, 2019

Last month, Rep. Alexandria Ocasio Cortez and Senator Kamala Harris released their Climate Equity Act – the first draft of a critical component of a Green New Deal. The act aims to protect marginalized communities as Congress attempts to “address” climate change by creating a system that gives environmental legislation an equity score based on its impact on “frontline communities.”

By their definition, frontline communities include people of color, indigenous and low-income people, as well as groups vulnerable to energy transitions – like rural, deindustrialized, elder, unhoused and disabled communities. The proposed bill would also create an Office of Climate and Environmental Justice Accountability, which would “work with” key federal departments – including the Department of Homeland Security, or DHS – which houses FEMA as well as predatory immigration agencies like Immigration and Customs Enforcement (ICE) and Customs and Border Protection (CBP).

As the intensity of the climate crisis grows, migration will also increase. A 2018 report from the International Organization for Migration estimates 405 million people will be forced to emigrate by 2050. As lawmakers consider how to equitably respond to climate catastrophe, it’s critical that they do so with a clear vision in mind. Any definition of frontline communities must also include current and future undocumented immigrants. And a plan for climate justice cannot leave room for “working with” agencies like ICE and CBP, which should instead be abolished.

DHS has already laid out its response to climate change: a path that requires increased border security and deportations – all to preserve a status quo that harms people of color. A 2012 report from the department clearly elaborates how they imagine climate change will impact their role. “Over time,” the report states, “the Department will expand its planning to include potential climate change implications to securing and managing our borders, enforcing and administering our immigration laws, and other homeland security missions.”

In a 2015 congressional hearing, one DHS official referred to climate change as a “threat multiplier” that “could increase population movements, both legal and illegal, toward or across the U.S. border.” The DHS response to climate change, in other words, is to continue using ICE and CBP to further incarcerate current and future undocumented immigrants. This form of eco-fascism is far from the climate justice the Green New Deal is supposed to envision.

Journalist Todd Miller recently covered a 2003 Pentagon-commissioned report that considers responses to worst-case climate scenarios. “The United States and Australia are likely to build defensive fortresses around their countries because they have the resources and reserves to achieve self-sufficiency,” the report imagines – a trend that is already in progress. “Borders will be strengthened around the country to hold back unwanted starving immigrants from the Caribbean islands (an especially severe problem), Mexico, and South America.” This vision is not far off from the sentiment found in the manifesto attributed to the recent white supremacist shooter in El Paso.

Earlier this year, millions of Central American migrants sought asylum at the border of Mexico and the US. The World Food Programme estimates that 2.2 million people from Guatemala, Honduras, El Salvador and Nicaragua have lost their crops due to prolonged droughts and heavy rain in Central America’s “Dry Corridor.” As Lauren Markham reports in the Guardian, the U.S. Agency for International Development predicts some zones in Honduras will see a 60 percent increase in flooding, as arid regions grow in Guatemala and El Salvador is loses parts of its coastline.

These climate crises will only continue to impact the crops of indigenous and vulnerable communities. Meanwhile, a recent report by WFP found an increase of vulnerable populations in the Dry Corridor immigrating to the U.S. because of food insecurity.

Many families reach the U.S.-Mexico Border only to be incarcerated in concentration camps and separated from their families. What is the point of having a Green New Deal if our brothers and sisters running away from climate destruction will be caged in concentration camps, as they are now? Given the mass migration spurred by climate change, true climate justice must include abolishing ICE and CBP.

Right now, the Department of Homeland Security has funneled $25.5 billion to ICE and CBP and their deportation machine. That taxpayer money ends up enriching private corporations like Core Civic, GEO Group and Elbit Systems that profit off our current carceral status quo.

There are other steps the government could take to protect people from climate change. Some of the top elite polluters in the world, causing millions of deaths and displacement, are based in the United States. The greed of companies like Exxon Mobil and Chevron are hurting millions of families of color globally. But instead of putting a stop to the greed of corporations, the U.S. continues to prioritize keeping immigrant people of color out.

By allowing CBP and ICE to continue incarcerating immigrants of color, we are allowing white supremacy to secure its safety from climate change. We need to make sure that as we step in the path of the Green New Deal, frontline communities include our brothers and sisters immigrating from climate crisis. There is no climate justice without immigration justice. As we look into a cleaner future, we must also look towards a future with no concentration camps, no ICE, no CBP, and no borders.

Josue De Luna Navarro is the current New Mexico Fellow at the Institute of Policy Studies. Josue has worked along side immigrant-led grassroots organizations like United We Dream and the New Mexico Dream Team for the past 5 years.