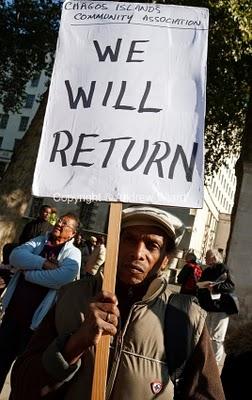 After 40 years of exile and too many broken hearts, it's long past time we let the Chagossians go home.
By David Vine | May 29, 2013 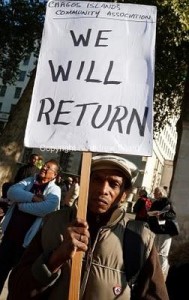 Over a weekend of memorials, I was remembering a friend who died of a broken heart. Her death certificate may not say so, but she did. Aurélie Lisette Talate died last year at 70 of what members of her community call, in their creole language, sagren—profound sorrow.

Madame Talate, as many called her, was a stick-thin, strong-biceped woman. She ate almost nothing, smoked a lot, and spoke with a power that earned her the nickname ti piman—little chili pepper—because the littlest chilies are the hottest and fiercest. Then again, on the rare occasions when she smiled, she smiled like a little girl.

Madame Talate died of sagren because the U.S. and British governments exiled her and the rest of her Chagossian people from their homeland in the Indian Ocean’s Chagos Archipelago to create a secretive military base on Chagos’ largest island, Diego Garcia.

This month marks the 40th anniversary of the final deportations, when the last boatload of Chagossians arrived 1,200 miles from their homes, on the western Indian Ocean islands of Mauritius and the Seychelles. In those same 40 years, the base on British-controlled Diego Garcia helped launch the Afghanistan and Iraq wars and was part of the CIA’s secret “rendition” program for captured terrorist suspects.

The history of the base, which the U.S. military calls the “Footprint of Freedom,” dates to the 1950s and 1960s. By then, Chagossians had been living in the previously uninhabited Chagos islands for almost 200 years, since their ancestors arrived as enslaved Africans and indentured Indians. In 1965, after years of secret negotiations, Britain agreed to separate Chagos from colonial Mauritius (contravening UN decolonization rules) to create a new colony, the British Indian Ocean Territory. In a secret 1966 agreement, Britain gave U.S. officials base rights on Diego Garcia and agreed to take those “administrative measures” necessary to remove the nearly 2,000 Chagossians in exchange for $14 million in secret U.S. payments.

Beginning in 1968, any Chagossians who left Chagos for medical treatment or regular vacations in Mauritius were barred from returning home, marooning them often without family members and deprived of almost all their possessions. British officials soon began restricting food and medical supplies to Chagos. Anglo-American officials designed a public relations plan aimed at, as one British bureaucrat said, “maintaining the fiction” that Chagossians were migrant laborers rather than a people with roots in Chagos for five generations or more. Another British official called them “Tarzans” and “Man Fridays.”

British agents, with the help of Navy Seabees, quickly rounded up the islanders’ pet dogs, gassing and burning them in sealed cargo sheds. They ordered Madame Talate and the remaining Chagossians onto overcrowded cargo ships. During the deportations, which took place in stages until May 1973, most Chagossians slept in the ship’s hold atop guano—bird crap—while prized horses stayed on deck. By the end of the five-day trip, vomit, urine, and excrement were everywhere. At least one woman miscarried.

Arriving in Mauritius and the Seychelles, Chagossians were literally left on the docks. They were homeless, jobless, and had little money, and they received no resettlement assistance. In 1975, the Washington Post broke the story in the Western press and found them living in “abject poverty.” Most remain deeply impoverished to this day.

Soon after Madame Talate arrived in Mauritius, two of her sons died. Madame Talate experienced fainting spells, couldn’t eat, and became remarkably skinny after being, in her words, “fat” in her homeland.

“I had something that had been affecting me for a long time, since we were uprooted” from Diego Garcia, she told me. “This sagren, this shock. … And it was this same problem that killed my child,” she continued. “We weren’t living free like we did in our natal land. We had sagren when we couldn’t return.”

Scores more Chagossians have reported deaths from sadness and sagren. They are not alone. Reports of deaths from a broken heart abound, including among elderly people forced into nursing homes and other indigenous and displaced peoples. In my own family, my grandmother recounts how her mother died of a broken heart after sending her 13-year-old son from Nazi Germany to Amsterdam in 1938, where he was ultimately deported to Auschwitz and murdered. When she died, her doctor said she died of a broken heart. “The guilt she carried with her ultimately just broke her heart,” my grandmother explains. “Yes. It’s possible.”

In fact, medical research increasingly supports such claims: one study suggests that acute stress can bring on fatal heart spasms in people with healthy cardiac systems; another indicates that the death of a spouse or child can cause dangerous heart rhythms, potentially increasing the risk of heart attacks and sudden cardiac death.

Before her death, Madame Talate helped lead her people in demanding the Anglo-American powers return them to their homeland. Sadly, after 40 years, too many Chagossians like Madame Talate have died brokenhearted, with the two governments still refusing to let them go home.

Recently the heartbreak has mounted. In 2008, after three lower courts in Britain had ruled the expulsion illegal, Britain’s highest court overturned those rulings by a 3-2 margin, upholding the government’s colonial right to exile a people. Last year, the European Court of Human Rights dismissed the Chagossians’ final appeal on procedural grounds.

A day after the European court ruling, the Obama administration rejected the demands of an online petition signed by some 30,000 asking the White House to “redress wrongs against the Chagossians.” The administration sidestepped U.S. responsibility and said Britain has been doing enough to address “the hardships they endured.”

To make matters worse, in 2010, the British government created a Marine Protected Area (MPA) in Chagos. Officials denied it was an attempt to prevent a return no matter the court rulings. Then a secret Wikileaks cable revealed a senior British official saying, “Former inhabitants would find it difficult, if not impossible, to pursue their claim for resettlement on the islands if the entire Chagos Archipelago were a marine reserve.” U.S. officials agreed the MPA would likely “be the most effective long-term way to prevent” resettlement. Adding insult to injury, the British official repeated his predecessor’s racist slur, saying the MPA would allow no “Man Fridays.”

Shockingly, British judges presiding over a Chagossian legal challenge to the MPA last month ruled the Wikileaks cable inadmissible as evidence because it violates diplomatic privilege. British and U.S. authorities will “neither confirm nor deny” its authenticity.

Repeatedly our leaders in the White House and Congress and their British allies have turned their backs on the injustice our nations committed against a small people. The Chagossians, who now number some 5,000, don’t want to remove the base on Diego Garcia. They simply want to return (and, for many elders, die) where their ancestors are buried and receive proper compensation.

It’s long past time our country acknowledges its responsibility for the Chagossians’ exile and ensures these demands are met. Especially compared to the billions we’ve spent on Diego Garcia, it would take pennies to help repair the lives of those who’ve suffered for the base.

After 40 years of exile and too many broken hearts, it’s long past time we let the Chagossians go home.