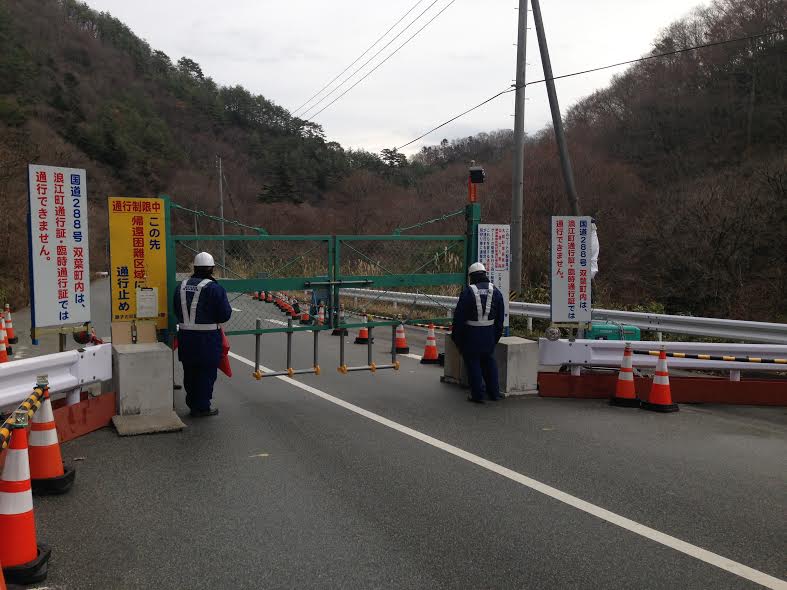 Entrance to the no-go zone. Sign reads: "areas difficult to return to." Photo by Alexis Dudden

The Fourth Winter of Fukushima

In the fourth winter since the nuclear disaster in Fukushima, Japan, many of the displaced residents are still in limbo.
By Alexis Dudden | January 1, 2015

“No, nothing. I have nothing planned for New Year’s. Nothing at all. No one is coming.” A shy, round-faced woman spat these words like darts into the protective mask she wore. Moments earlier she had been laughing happily together with several other former residents of the small town of Tomioka as they reminisced about a friend they all knew. She quickly became raw, however, when asked about the coming holidays.

Tomioka counted 15,839 residents before the March 11, 2011 nightmare of earthquake, tsunami, and nuclear explosion began. All but one person has left — Matsumura Naoto, the now well-known rice farmer who refuses to abandon his family’s fifth-generation farm.

Confusion and despair among the others is common, a state of existence that government officials bewilderingly made even worse on March 25, 2013 when they divided the roughly 25-square-mile seaside spot into three zones: never to return, return for short periods, and in preparation to return. Government-sponsored scientists determined such divisions here and in other areas near the nuclear plant based on so-called acceptable annual dosage rates. Such designations may make surreal sense in scientific terms. In daily life, however, it means streets separated down the middle, one side “safe” while houses around the corner are condemned for tens of thousands of years to come.

All involved understand that the official designations are of critical significance in terms of compensation. If your property was anywhere but “never to return” you won’t be paid for much longer. Less appreciated is how such nuances taken together are playing out among those on the verge of their fourth winter in limbo.

Many of the former residents of Tomioka are now living 25 miles to the west in the rural town of Miharu, famous for its 1,000-year-old cherry tree.  Miharu currently houses about 2,000 people of a total of nearly 140,000 officially classified as “displaced” by the crisis. The term “nuclear refugee” is out. All are lumped together as one. Yet those permanently shut out of their former lives since the Fukushima Daiichi power plant spiraled into meltdown include some who have been in as many as 10 shelters in three-and-a-half years.

On a recent afternoon a small group of Tomioka’s forever “displaced” villagers gathered to talk in a brightly lit common room hidden among twenty or so rows of tightly spaced sand-colored buildings that have been subdivided into small rooms for couples and individuals mainly in their sixties and seventies. A younger man in his fifties stood out. Before the crisis, his business supplied lunches for workers at the nuclear power plant. Vibrant and seemingly able to go anywhere, he is trapped by rules that among other things prevent him from living in Tomioka yet allow him several times a week to visit his beloved dachshund Chocolat, whom he refuses to leave to die.

Many of the displaced still believed in the possibility of return up to a few months ago. The group’s mayor Matsumoto-san no longer sees such a resolution. “If only they had told me then, told me that we wouldn’t be able to go back, I could have taken my family and moved to Aomori (in northern Japan), and we would be together,” he said. He was sharing what many express as the worst of it: families torn apart, children and grandchildren now living scattered throughout Japan and rarely if ever visiting. The shelters offer small, attached units, yet there is little open space, and certainly no land to farm. Freshly painted signs on the streets point to the housing units and appear welcoming, yet those inside say they know they are “in the way” and that “after a while you understand they don’t want you anymore.”

One woman had a surprise for the others. “I’m so sorry I didn’t tell you before,” she began, perhaps taking advantage of the two strangers in the mix to break her news. “I applied to the (housing) lottery, and I’m sorry to tell you that I won. I’m very sorry. In a few weeks I’ll move away to a permanent unit. It isn’t much. I know I had a better chance because I’m on my own. I hope you’ll forgive me.”

Some might reduce these words to cultural essentialisms, yet a powerfully unprocessed atmosphere filled the room. The thin sense of community was yet again torn asunder, and while a few wished her luck — she had been in six different shelters before this — the rest gradually looked as if they would be sick and said nothing. Another woman fought off tears.

The newly published housing policy appears under the awkward slogan in Japanese and English — “Future From Fukushima” — and reveals itself for what it has been from the beginning: make it up as it goes along. Tiny details drive home the point. Even if you’re fortunate enough to win a permanent place and you manage to survive for more than 11 years, you’ll start having to pay rent.

The woman who won did not know this, nor did anyone fill her in if they did. She would escape to a place to call home this winter. Meanwhile, some among the others would become part of a sad statistic, one of the only clear facts to come out since March 2011. More people have died from stress-related causes than from the initial disasters in Fukushima.

Alexis Dudden is a professor of history at the University of Connecticut, a contributor to Foreign Policy In Focus, and the author of Troubled Apologies Among Japan, Korea, and the United States (Columbia University Press, 2008).