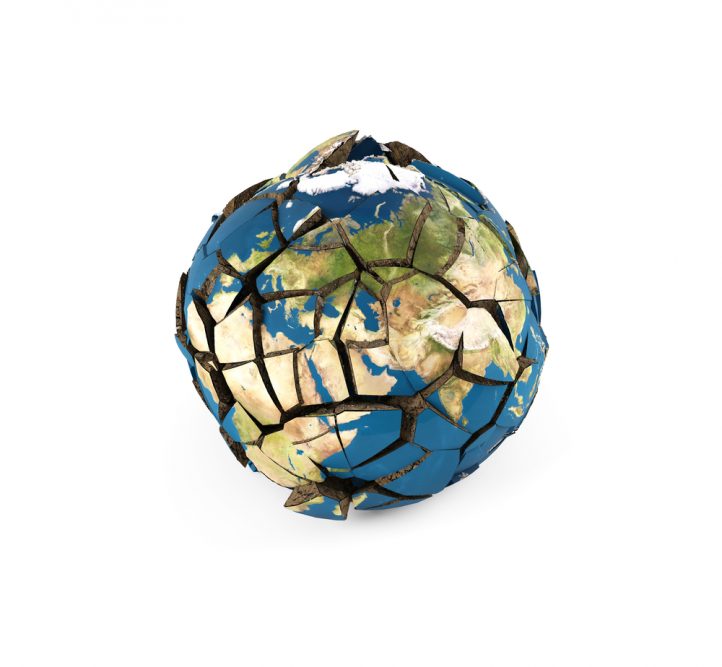 Shortly after the November elections, a friend sent me a photo via Facebook. It was a sandwich board outside a bookstore in Massachusetts. It read: “Post-apocalyptic fiction has been moved to our current affairs section.”

My friend added a note of her own: “Trump’s election should help with sales of your new book.”

My new book is a dystopian novel about how the world falls apart. Splinterlands, published this month by Haymarket and available here, was not intended to be a depiction of current events. I didn’t think that Britain would vote to leave the European Union last June. Nor did I think Donald Trump would win the November elections.

But when I was writing the manuscript a year ago, I was certainly worried about the trend lines.

After all, the EU has sustained a number of heavy body blows over the last several years. These challenges have ranged from the Greek economic crisis and the assault of Euroskeptical governments in Eastern Europe to the greater popularity of right-wing populists in Western Europe and the rising xenophobia that has accompanied the large influx of immigrants from conflict zones in the Middle East.

In the United States, meanwhile, Donald Trump was articulating the profound unease that many Americans have felt about economic globalization, political elites, and liberal culture. I didn’t think he’d win in 2016 (and, according to the popular vote, he didn’t). But I was worried that a more capable politician would run on Trump’s platform and eke out a victory in 2020.

So, Splinterlands was supposed to be a warning. Britons were supposed to handily defeat Brexit; Hillary was supposed to easily win the Electoral College. Don’t be complacent, I was warning my future readers: The EU could still fragment, and the United States could still elect a neo-fascist. I’d issued a similar warning in August 2008 about a “Goldilocks apocalypse” happening as a result of the aggressively centrist policies of Barack Obama.

Now, with millions of Americans concerned about a Trumpocalypse, complacency is no longer my chief concern.

Sometimes, the future rushes at you like an oncoming car that suddenly crosses over the centerline of the highway. Jerked out of a near-snooze, you try to swerve. But the future hits you head on. In the wee hours of the morning of November 10, what’s the last thought in your head before you sink into unconsciousness?

I sure hope the air bag works.

There is nothing more frightening than a bomb squad that’s trained not to defuse munitions, but rather to blow up the very institutions they’re supposed to protect. Donald Trump is assembling quite a team of these auto-demolition experts.

There’s the EPA administrator who places his faith in fossil fuels and can’t wait to gut environmental regulations, the secretary of labor who wants to replace workers with robots, the head of the education department who would dearly love to privatize and Christianize the public education system. Then there’s Rick Perry, who once promised to eliminate the very Energy Department that Trump wants him to lead. Who knows what Ben Carson will do with housing or Linda McMahon at the Small Business Association. They’re eminently unqualified. Trump, the putative anti-elitist, would have done the world a favor by selecting nominees at random from the phone book.

Equally great damage will be done in the realm of foreign policy.

Consider John Bolton, who is up for the position of deputy secretary of state. It’s bad enough that the choice for secretary of state is a top oil executive who knows nothing about diplomacy and is looking forward to negotiating with Vladimir Putin, oligarch to oligarch. Incomparably worse is a nominee who knows the inner workings of international relations and wants nothing better than to blow them up. Expect Exxon exec Rex Tillerson to travel around the world and conclude deals that enrich his buddies. John Bolton, meanwhile, will be busy destroying everything in sight.

Margaret Thatcher once said that she didn’t believe in “society.” Bolton, similarly, doesn’t believe in the international community. He famously asserted that the UN complex in New York would be better off if it lost ten floors.

Bolton unapologetically endorsed the Iraq War, supported a military strike against Iran, and has savaged the détente with Cuba. He wants to go head-to-head with China. He’s a big fan of Israel’s Benjamin Netanyahu and Egypt’s Abdel Fattah el-Sisi. He welcomed the Brexit vote as an escape from “the EU Titanic.” He can’t wait to take the gloves off to fight a civilizational battle against “radical Islam.”

How could the realm of international relations produce such a violent, abrasive bomb-thrower like John Bolton? You might as well ask why the human body produces potentially fatal cancer cells.

In my novel Splinterlands — and you can read an excerpt here at Alternet — I write about a future in which the international community has disappeared, the EU has fallen apart, and large nation-states like Russia, China, and the United States have fractured. Even organic farming communes have to maintain well-stocked arsenals to protect themselves from the war of all against all taking place outside their walls. The rich have seceded from society; the poor are at the mercy of the elements; and the middle class has been whittled down to a mere sliver. Without any international cooperation to speak of, the planet can’t address the common ills of climate change, global pandemics, and economic inequality.

It doesn’t take much to unravel the international community. One or two bomb throwers can do the trick.

Donald Trump is appointing a whole cabinet of them.

From Here to Dystopia

In that old TV ad, Madge the manicurist tells her customer to use Palmolive to wash dishes because it will soften her hands. The customer expresses doubt. “But you’re already soaking in it,” Madge points out, and the camera zooms in on the customer’s hand resting in the green liquid.

Dystopias are almost always set in the future. Readers might identify certain unpleasant aspects of contemporary life exaggerated for effect by the science fiction writer. Women have no control over their bodies in The Handmaid’s Tale. Everyone is stupefied by drugs in Brave New World. Water has become the most precious natural resource in The Water Knife.

But sometimes, as we dip into the latest dystopian fiction, we discover that, oops, we’re already soaking in it. George Orwell was famously undecided about the title of his most notorious dystopian fiction. He was certainly thinking of the date he finished the book, 1948, when he settled on its anagram, 1984. That fictional year almost immediately became synonymous with a future of unrelenting despair. In reality, as the Iron Curtain clanked shut in the middle of Europe, 1948 was already pretty dystopian. War between Oceania and the other two super-states was just around the corner, and Newspeak had already taken over the public sphere.

Orwell intended his novel as a cautionary tale. Unless the Britons of 1948 made wiser political decisions, they would one day wake up in Airstrip One with Big Brother staring at them from posters on every street corner. They had to be careful not to take the wrong turn off history’s highway.

In Splinterlands, the main character is obsessed with this very question of when the world took its fatal detour.

For decades, scholars have put the onus on large impersonal events — Hurricane Donald, the Great Panic of 2023, the displacement of the dollar — as if a policy nudge or two one way or another might have prevented these developments. I’ve always focused instead on 2018. As far as I can tell, that was the last moment when we had a definite shot at dodging the bullet.

The problem is: It wasn’t a single bullet and there wasn’t a single gun. If several EU countries hadn’t set up internal borders against refugees, migrant workers, and perceived terrorists, if the United States hadn’t made one last effort to preserve its global military “footprint,” if the world community hadn’t paid mere lip service to its previous commitments to curb carbon emissions, the story might have turned out differently.

Looking backward, history always seems inevitable. However, since we face forward into the unknown, we can always change our story. Even when the headwind is strong and the ground slopes up, we can alter our trajectory. Even when we look into the distance and Trump is as ubiquitous as a reality-show Big Brother, we can stubbornly refuse to accept this manufactured reality.

Dystopias are not always safely in the future. We may discover with a start that we are soaking in it. But we are not just passive readers. We are also active writers. And with a lot of grit and old-fashioned organizing, from bookstores to barricades, we can write ourselves a different story.