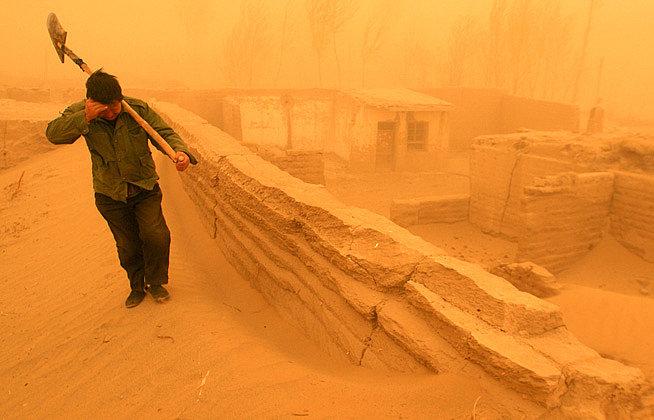 From Pacific Pivot to Green Revolution

Here's a proposal for putting the environment smack at the center of security, beginning with Asia.
By John Feffer, Emanuel Pastreich | October 4, 2012 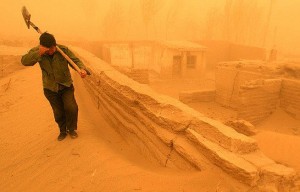 The low rolling hills of the Dalateqi region of Inner Mongolia spread out gently behind a delightful painted farmhouse. Goats and cows graze peacefully on the surrounding fields. But walk due west just 100 meters from the farmhouse and you’ll confront a far less pastoral reality: endless waves of sand, absent any sign of life, that stretch as far as the eye can see.

This is the Kubuchi desert, a monster born of climate change that is slouching inexorably east toward Beijing, 800 kilometers away. Unchecked, it will engulf China’s capital in the not-so-distant future. This beast might not be visible yet in Washington, but strong winds carry its sand to Beijing and Seoul, and some makes it all the way to the east coast of the United States.

Desertification is a major threat to human life. Deserts are spreading with increasing speed on every continent. The United States suffered a huge loss of life and livelihood during the Dust Bowl of the American Great Plains in the 1920s, as did the Sahel region of West Africa in the early 1970s. But climate change is taking desertification to a new level, threatening to create millions, eventually billions, of human environmental refugees throughout Asia, Africa, Australia, and the Americas. One-sixth of the population of Mali and Burkina Faso has already become refugees because of spreading deserts. The effects of all this creeping sand cost the world $42 billion a year, according to the UN Environmental Program.

Spreading deserts, combined with the drying of seas, the melting of polar ice caps, and the degradation of plant and animal life on earth, are rendering our world unrecognizable. The images of barren landscapes that NASA’s Curiosity Rover has sent back from Mars may be snapshots of our tragic future.

But you wouldn’t know that desertification is the harbinger of the apocalypse if you looked at the websites of Washington think tanks. A search on the website of the Brookings Institution for the word “missile” generated 1,380 entries, but “desertification” yielded a paltry 24. A similar search on the website of the Heritage Foundation produced 2,966 entries for “missile” and only three for “desertification.” Although threats like desertification are already killing people—and will kill many more in the decades ahead—they don’t receive nearly as much attention, or resources, as such traditional security threats as terrorism or missile attacks, which kill so few.

Desertification is only one of dozens of environmental threats—from food shortages and new diseases to the extinction of plants and animals critical to the biosphere—that threaten the extermination of our species. Yet we have not even started to develop the technologies, the strategies, and the long-term vision necessary to face this security threat head-on. Our aircraft carriers, guided missiles, and cyber warfare are as useless against this threat as sticks and stones are against tanks and helicopters.

If we are to survive beyond this century, we must fundamentally alter our understanding of security. Those who serve in the military must embrace a completely new vision for our armed forces. Starting with the United States, the world’s militaries must devote at least 50 percent of their budgets to developing and implementing technologies to stop the spread of deserts, to revive oceans, and to transform completely the destructive industrial systems of today into a new economy that is sustainable in the true sense of the word.

The best place to begin is in East Asia, the focus of the Obama administration’s much-vaunted “Pacific pivot.” If we don’t execute a very different kind of pivot in that part of the world, and soon, the desert sands and the rising waters will engulf us all.

East Asia increasingly serves as the engine driving the world economy, and its regional policies set the standards for the world. China, South Korea, Japan, and increasingly Eastern Russia are ramping up their global leadership in research, cultural production, and the establishment of norms for governance and administration. It is an exciting age for East Asia that promises tremendous opportunities.

But two disturbing trends threaten to undo this Pacific Century. On the one hand, rapid economic development and an emphasis on immediate economic output —as opposed to sustainable growth—have contributed to the spread of deserts, the decline of fresh water supplies, and a consumer culture that encourages disposable goods and blind consumption at the expense of the environment.

On the other hand, the relentless increase of military spending in the region threatens to undermine the region’s promise. In 2012, China increased its military spending by 11 percent, passing the $100-billion mark for the first time. Such double-digit increases have helped push China’s neighbors to increase their military budgets as well. South Korea has been steadily increasing its spending on the military, with a projected 5-percent increase for 2012. Although Japan has kept its military spending to 1 percent of its GDP, it nevertheless registers as the sixth biggest spender in the world, according to the Stockholm International Peace Research Institute. This spending has stimulated an arms race that is already spreading perforce to Southeast Asia, South Asia, and Central Asia.

All this spending is linked to the colossal military expenditures in the United States, the prime moverfor global militarization. Congress is currently considering a $607-billion Pentagon budget, which is $3 billion more than what the president requested. The United States has created a vicious circle of influence in the military realm. The Pentagon encourages its allied counterparts to boost their spending in order to buy U.S. weapons and maintain the interoperability of systems. But even as the United States considers Pentagon cuts as part of a debt reduction deal, it asks its allies to shoulder more of the burden. Either way, Washington pushes its allies to devote more resources to the military, which only further strengthens the arms race dynamic in the region.

European politicians dreamed of a peaceful integrated continent one 100 years ago. But unresolved disputes over land, resources, and historical issues, combined with increased military spending, precipitated two devastating world wars. If Asian leaders don’t rein in their current arms race, they risk a similar outcome, regardless of their rhetoric about peaceful coexistence.

Environmental threats and runaway military spending are the Scylla and Charybdis around which East Asia and the world must navigate. But perhaps these monsters can be turned against one another. If all the stakeholders in an integrated East Asia redefine “security” collectively to refer primarily to environmental threats, cooperation among the respective militaries to address environmental challenges could serve as a catalyst to produce a new paradigm for coexistence.

All the countries have been gradually increasing their spending on environmental issues – China’s famous 863 program, the green stimulus package of the Obama administration, Lee Myung-bak’s green investments in South Korea. But this is not enough. It must be accompanied by serious reductions in the conventional military. Over the next decade China, Japan, Korea, the United States and other nations of Asia must redirect their military spending to address environmental security. The mission for every division of the military in each of these countries must be fundamentally redefined, and generals who once planned for land wars and missile attacks must retrain to face this new threat in close cooperation with each other.

America’s Civilian Conservation Corps, which used a military regimen as part of a campaign to address environmental problems in the United States during the 1930s, can serve as a model for the new cooperation in East Asia. Already the international NGO Future Forest brings Korean and Chinese youth together to work as a team planting trees for its “Great Green Wall” to contain the Kubuchi Desert. Under the leadership of former South Korean ambassador to China Kwon Byung Hyun, Future Forest has joined with local people to plant trees and secure the soil.

The first step would be for the countries to convene a Green Pivot Forum that outlines the chief environmental threats, the resources needed to combat the problems, and the transparency in military spending needed to ensure that all countries agree about the base-line figures.

The next step will be more challenging: to adopt a systematic formula for the reassignment of every part of the current military system. Perhaps the navy would deal primarily with protecting and restoring the oceans, the air force would take responsibility for the atmosphere and emissions, the army would take care of land use and forests, the marines would handle complex environmental issues, and intelligence would handle the systematic monitoring of the state of the global environment. Within a decade, more than 50 percent of the military budgets for China, Japan, Korea, and the United States—as well as other nations—would be dedicated to environmental protection and ecosystem restoration.

Once the focus of military planning and research is transformed, cooperation will become possible on a scale that was previously only dreamed of. If the enemy is climate change, close collaboration between the United States, China, Japan, and the Republic of Korea is not only possible, it is absolutely critical.

As individual countries and as an international community, we have a choice: We can continue on a self-defeating chase after security through military might. Or we can choose to address the most pressing problems facing us: the global economic crisis, climate change, and nuclear proliferation.

The enemy is at the gates. Will we heed this clarion call to service, or will we simply bury our heads in the sands?