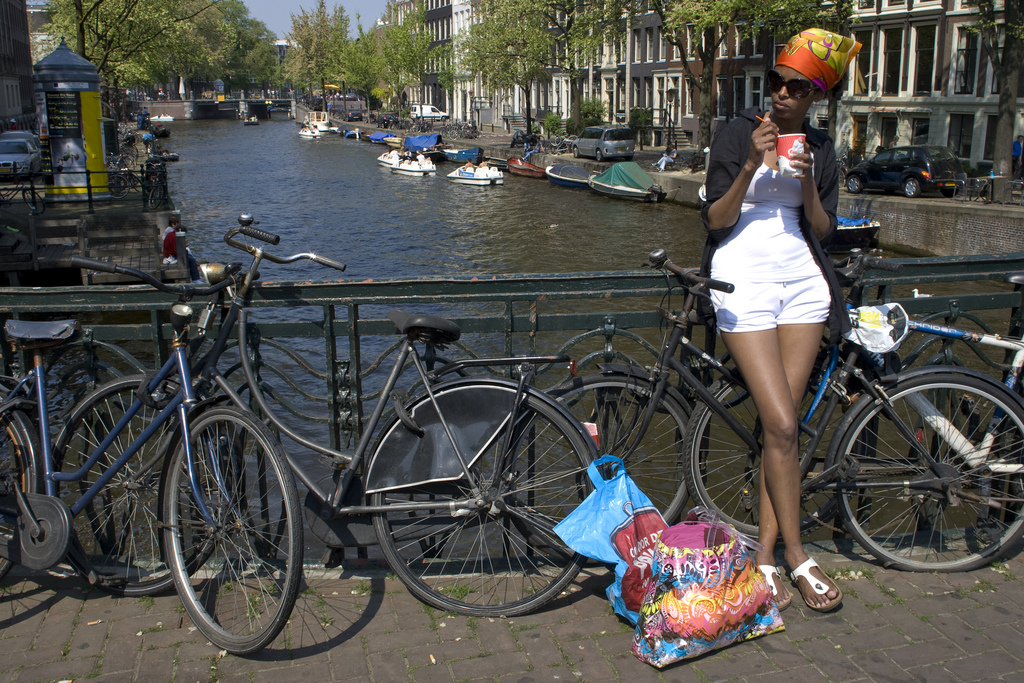 The Future of Europe Depends on This Vote in the Netherlands

A trade referendum in tiny Holland may influence the future of Ukraine, the trajectory of the EU, and whether armed conflict will return to Eastern Europe.
By John Feffer | April 6, 2016

The future of Europe is being decided this week in the Netherlands.

Perhaps you thought that the European Union’s fate would be voted up or down in June, when the United Kingdom holds its referendum on continued membership. The “leave now” constituency in the UK currently holds a four-point lead, though much depends on whether younger British voters who are more EU-friendly will actually make it to the polls. The stakes are indeed high in the UK, and Brexit quite naturally commands much of the world’s attention.

But this week, the Dutch are holding a referendum on a trade agreement with Ukraine that has already been approved by the Dutch parliament and by all the other members of the EU. Indeed, the agreement has already been partially in effect for much of 2015. The organizers of the referendum, only the second one in modern Dutch history, don’t actually care much about Ukraine. They simply wanted a way to rally Dutch public opinion against the EU. The association agreement, because of its European connection, served as a nice fat target.

In the initial exit polls, the anti-agreement forces were winning a clear victory, by nearly two to one. It’s not clear, however, whether enough voters will have turned out to achieve the 30 percent required to validate the results.

The result of the Dutch referendum is not the only storm cloud on the horizon.

NATO recently announced that it’s sending 4,200 additional troops and 200 tanks to Bulgaria, Romania, Poland, and the three Baltic states in order to counter an “aggressive Russia,” according to Philip Breedlove, the top U.S. commander in Europe. NATO is also assembling a 40,000 strong rapid-response force to deploy if one of its most easternmost members gets attacked.

It’s not exactly a high-noon moment in Europe. The European Union is distracted by the continuing impact of the refugee crisis. Russia has been focusing on events in Syria. Ukraine itself is struggling to establish a measure of political stability and deal with endemic corruption. A tenuous ceasefire holds in the Donbass region of eastern Ukraine.

But events this week may nevertheless determine the future of Ukraine, the trajectory of the EU, and whether armed conflict will return to Eastern Europe.

Much depends on the Dutch.

The Ukrainian economy has taken a beating in the last couple years. In 2014, according to the World Bank, the economy shrank by nearly 7 percent. Last year, it contracted by an astonishing 12 percent. In this context, projected growth of 1 percent in 2016 is cause for celebration. But at that rate, Ukraine won’t even get back to pre-Euromaidan levels for some time.

One major reason for the economic tailspin is the loss of the Russian market. Gone the cheap Russian energy flowing to Ukraine; gone the aviation exports going the other way to Russia. According to Ukrainian government statistics, Ukrainian exports to Russia dropped by a third in 2014. In the first half of 2015, trade fell by another 59.4 percent. The same sources indicate that Ukraine has now become, basically, an exporter of raw materials: corn, iron, sunflower oil. That’s not exactly a recipe for rapid economic growth.

The association agreement with the EU — the same association agreement proposed in 2014 that sparked the Euromaidan protests — might ordinarily be a lifesaver for Ukraine. As Russia steps away, the EU steps in. And boy, what a economic plum the EU is! Through this agreement, Ukraine gains preferential access to a market of 500 million customers.

But it’s not clear whether Ukraine is selling anything that these customers want to buy — or are even allowed to buy. As Nicolai Petro writes in The Guardian:

EU rules restrict Ukraine’s exports to Europe, which fell 23 percent in 2015 despite the preferential tariff regime that was in place for most of last year. For example, only 72 Ukrainian companies are allowed to export food of animal origin to the EU: 39 of the licenses are for honey. While that may sound like a lot of honey, Ukraine exported its yearly quota for honey in the first six weeks of 2016. A similar story holds for other commodities.

Also, the association agreement goes both ways. As the EU removes tariff walls against Ukrainian products, so Ukraine takes away barriers to EU products. During the 1990s, Eastern European countries discovered to their dismay what happens when West European products suddenly become available much more cheaply: a hollowing out of domestic industries and agriculture.

You’d think, perhaps, that the Dutch are just now poring over all of these statistics to determine whether or not to support the association agreement. But the Dutch referendum, as I said, is not about Ukraine.

The opponents of the association agreement — an odd combination of Euroskeptics, right-wing populists like Geert Wilders, the left-wing Socialist Party, and even an animal-rights group — have made any number of absurd objections to the agreement: that it will cause Ukrainian workers to flood the EU (they won’t), that fascists are in control of Ukraine (they aren’t), or that the agreement is the first step for Ukraine to join the EU (in another 50 years, if the Ukrainians are lucky and the EU still exists).

The supporters of the agreement are not much better. They have tried to turn the vote into a referendum on Vladimir Putin. As Politico reports:

Supporters of the Ukraine agreement see the Russian leader as a bully who has to be taught a lesson. In their view, rejecting the accord would betray Ukrainians, boost the Kremlin, and reward Russia’s aggression against Ukraine. A digitally manipulated poster created by Yes backers and displayed in the Amsterdam subway shows a passionate kiss between populist Dutch politician Geert Wilders, who opposes the treaty, and the Russian president.

Sure, Putin is a bully, but the referendum is not about Russia. It’s not about pulling Ukraine apart. It’s about following through on a commitment that the EU made in the aftermath of the changes that took place in Ukraine in 2014.

On the basis of the trade figures mentioned above, a good argument could be made both for and against the agreement. But the Dutch are not debating the finer points of trade. There are larger issues at stake. A “yes” vote represents a measure of hope — in the continued viability of the European Union and its potential to help countries on its borders. “No,” meanwhile, suggests that the EU is a spent force and the “European idea” no longer has any capacity to inspire the better angels of our nature.

If the initial results of the referendum hold up, and Dutch voters reject the agreement, it could significantly buoy the hopes of Euroskeptics in the UK and elsewhere in the EU. And it would be yet another misfortune for Ukraine to suffer in a year of hard knocks.

The Trouble with Ukraine

Ukrainians are not just suffering economically.

The political situation in the country is tenuous, to say the least. The government of Petro Poroshenko has been trying to pull together a new ruling coalition that could support its choice for a new prime minister, Volodymyr Groysman. Groysman, in turn, has signaled that he would appoint Slovak politician Ivan Miklos as the country’s finance minister. Miklos presided over Slovakia’s economic about-turn in the 2000s.

But earlier this month, former prime minister and the head of the Fatherland Party Yulia Tymoshenko pulled out of negotiations over the creation of a new ruling coalition. Tymoshenko is, quite sensibly, outraged at how the economic reforms so far have plunged Ukrainians into misery. But she’s also taking a chance that she and her party would benefit the most from early elections.

Poroshenko — whose disapproval rate hovered around 70 percent back in January — has been reeling from a succession of corruption allegations. The latest ties him to the Panama-Gate revelations — the huge investigative journalism undertaking that has implicated politicians across the globe in off-shore schemes to enrich themselves and their cronies. Poroshenko, required to sell his cake and candy company Roshen, allegedly transferred the concern overseas in order to reap tax-free profits from the sale. The head of the country is supposed to be encouraging the citizens to pay the taxes that the state needs so desperately. He should not be misleading by example.

Poroshenko, up until the Panama-Gate scandal broke, was actually one of the more popular government figures. Prime Minister Arseniy Yatsenyuk and the parliament as a whole have approval ratings in the very low teens. A pervasive stink of corruption hangs over the country. Even after the Ukrainian government finally dismissed the notoriously unscrupulous prosecutor general, Viktor Shokin, The New York Times lambasted the leadership’s cronyism:

Poroshenko seems to have accepted continuing corruption as the price to pay for a modicum of maneuvering room. But the president, the prime minister, and the Parliament must be made to understand that the International Monetary Fund and donor nations, including the United States, cannot continue to shovel money into a corrupt swamp unless the government starts shaping the democratic rule that Ukrainians demanded in their protests.

Given that the economy has bottomed out, the political system is fragile, and corruption is widespread, the situation in the Donbass would seem to be the least of Kiev’s worries at the moment. After all, the situation in eastern Ukraine is relatively quiet, emphasis on “relatively.” Ceasefire violations continue sporadically, according to the Organization of Security and Cooperation in Europe (OSCE), and there have been casualties. Elections have not yet taken place in the Donbass region, though Poroshenko insists that more of an armed OSCE presence is necessary before any such election can proceed. But at least all is mostly quiet on the eastern front.

The last thing Ukraine needs right now is a resumption of hostilities in the Donbass. Given the punishing impact that low energy prices are having on its economy, Russia can also ill afford a hot war on its periphery and even more stringent sanctions. By sending more troops to its eastern borders, NATO is reassuring its newest members. By providing Ukraine with over $300 million in non-lethal security assistance, the United States is reassuring the Poroshenko government. But the West should be putting much more attention and resources into ensuring that the Minsk process succeeds. Signals that are reassuring to one side are very often threatening to the other.

The best way for Ukraine to guarantee its territorial integrity — and not lose any more acreage to an opportunistic Russia — is to be successful, politically and economically. Ukraine desperately needs a cohort of clean politicians at the helm. It needs an economic package of support that doesn’t require the most vulnerable portions of the population to shoulder most of the burden of economic reform. Economic and political success will more effectively secure the support of the residents of Donbass than force of arms.

Meanwhile, the EU has to get its own act together. It has to reimagine itself as something more than just austerity economics sung to the tune of Ode to Joy.

Brussels faces the same challenge as Kiev: how to command the loyalties of a diverse population. The Dutch, the British, the Greeks — they can’t be forced to stay inside the Union. The rewards of membership must be made visible and fast. The EU can still help Ukraine move forward. But it can do so only if it somehow masters its own centrifugal forces.