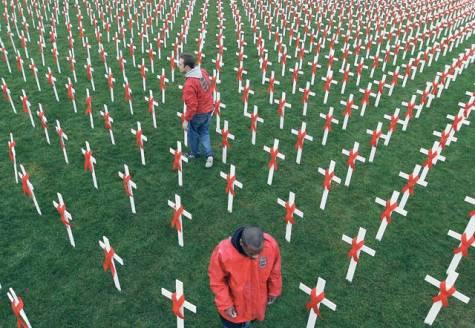 On the 30th anniversary of the first reported case of AIDS, we may just have turned the corner on battling the disease -- if we commit the resources.
By William Minter | June 7, 2011 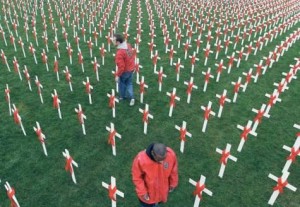 This week marks the 30th anniversary of the first reported case of AIDS, and world leaders are meeting at the United Nations to review progress in the fight against the epidemic. The battle is far from won. But new game-changing research, as well as documented successes in recent years, makes it possible to chart a clear course for significant victories in the years ahead.

In the last decade the number of people treated for AIDS in low- and middle-income countries has risen from a little over 300,000 to approximately 6.6 million. Globally, the annual rate of new infections dropped by nearly 25 percent between 2001 and 2009. In South Africa, the country with the largest number of people living with HIV, the rate of new infections dropped by 35 percent over the same period.

Some 34 million people are living with HIV, about two-thirds of them in Africa. There are at least 9 million more who should be receiving treatment under current guidelines. Even so, headlined The Economist on June 2, “it looks as though the plague can now be beaten.”

The most dramatic development, announced last month, was a scientific trial showing that early antiretroviral treatment for those infected could reduce transmission rates by an astonishing 96 percent. The implication is clear: treatment itself is among the most effective measures of prevention.

The recent scientific trial – the HPTN 052 study – included 1,736 couples in which one partner was healthy and the other was infected with HIV. In one group, the infected partner began antiretroviral treatment immediately. In the other group, treatment began only when the infected person’s CD4 count dropped below 250 (CD4 cells are white blood cells critical to the body’s capacity to respond to infection). There were 28 cases of transmission of HIV from the infected to the non-infected partner overall — but only one occurred in the early treatment group. This is not the first study indicating such an effect, but it is by far the largest, with the most decisive scientific conclusion.

These results add to a substantial knowledge base of what works in the fight against AIDS. This includes evidence on the effects of circumcision in reducing transmission, effective ways to prevent mother-to-child transmission, improved drug combinations, and a new microbicide for women.

We also know that treatment and prevention can be offered at low cost, by reducing the costs of drugs, training qualified nurses and others to assume tasks previously handled by doctors, fighting stigma, and involving particularly vulnerable communities themselves in targeted prevention campaigns.

Another encouraging development is related to political will rather than to medical research. After years of denial, the South African government is taking decisive leadership in the AIDS fight. In South Africa, in the nine months between June 2010 and February of this year, 11.9 million were tested for HIV, as compared to the previous rate of 2 million a year. The number of people receiving antiretroviral treatment rose to 1.4 million, a 50 percent increase. And the number of health centers equipped to provide AIDS treatment climbed from 490 to 2,205. At the same time, new purchasing agreements have reduced the cost of AIDS medicines in the country by 53 percent.

The South African case is significant. The country has the largest AIDS epidemic in the world, and it is closely linked by trade and migration to other countries in Southern Africa, the most affected region in Africa.. South Africa’s neighbor, the small country of Botswana, has already demonstrated impressive success in treating and preventing AIDS. Success in South Africa will save millions of lives there. It will also serve as an even more visible example for other countries around the continent.

The world leaders now meeting in New York must decide whether the international community will follow South Africa’s example of decisive action to build on these successes — or let the momentum of recent years falter for lack of funding. UNAIDS estimates a need for $22 billion a year by 2015 to ramp up treatment and prevention efforts worldwide. But after rapid increases from 2001 to 2008, global funding for AIDS flatlined at approximately $16 billion in 2009 and dropped in 2010. Both the Global Fund to Fight AIDS, TB, and Malaria and the bilateral U.S. PEPFAR program, which together have provided the major resources behind the advances of the last decade, are facing budget shortages. And while activists are pressing for a commitment this week at the UN to get at least 15 million people on treatment by 2015, key donor governments, including the United States, are reported to be resisting setting specific targets.

In the current political and economic climate, deciding to adequately fund the AIDS fight will be difficult. But there is an opportunity now to turn back this deadly epidemic. If we miss it, the result will be higher costs later on and a continuing daily toll of avoidable human suffering.

William MinterWilliam Minter is editor of the Washington-based AfricaFocus and a contributor to Foreign Policy In Focus.