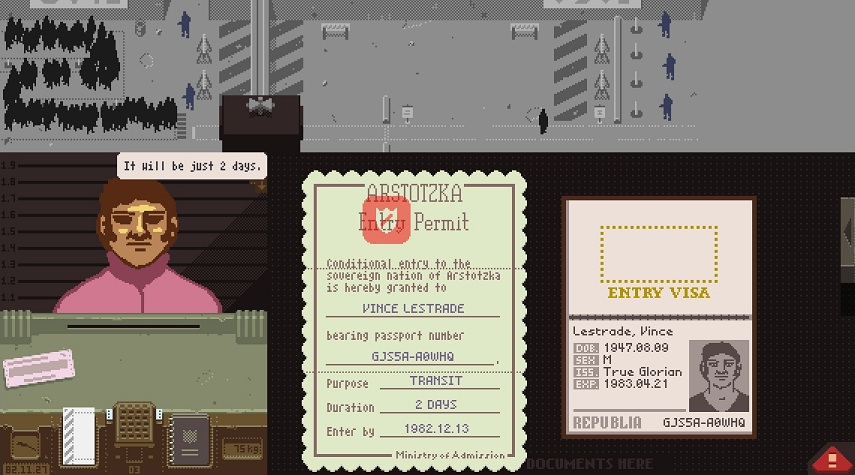 The Games of Our Lives

You are a customs official. It’s the early 1980s. You are living in a grim East European country.

Your job is to check the documents of visitors, immigrants, and returning citizens. You need the job because times are tight, and several of your family members are sick. Every day the rules change regarding the paperwork that the border-crossers need to show. You have to scrutinize the documents carefully and interrogate the person in front of your desk if any discrepancies turn up.

Occasionally bombs go off nearby as terrorists blow themselves up in protest against your government. At the end of the day, you go home to spend your pitiful salary on the food and medicines to keep your family alive. And the next day, you’re back at your desk, stamping documents.

If you think that computer games these days are all about shooting terrorists, throwing birds at pigs, or racking up points with “zoology” on a triple word score, you need to check out Papers, Please.

Developer Lucas Pope bills the game as a “dystopian document thriller.” I played the game for about an hour and found it surprisingly absorbing. It didn’t take long before I was eagerly trying to excel at my job, rooting out people with false documents and agonizing over whether to let in a desperate asylum-seeker even at the risk of losing my position.

Soon I was fully in the mindset of someone “just following orders,” and I was horrified at how easily I could step into the shoes of a faceless civil servant trying to survive in a blandly evil system.

A Generation of Gamers

Welcome to the latest generation of computer games. They don’t so much help you escape reality as insert you back into it at a different angle.

In Pandemic, you are a bacterium, a virus, or a parasite trying to take over the world: kill everyone and you win. In Unmanned, you experience a day in the life of a drone pilot, from shaving and driving to work to targeting persons of interest. In World Without Oil, you experience the first 32 weeks of a global oil crisis.

The game designer Jane McGonigal made a splash on TED when she proclaimed that, in order to save the world, people should be spending more time playing games. In 2010, she said the world spends 3 billion hours a week interacting with various virtual worlds. But to solve the myriad problems facing the real world, she argued, we need to spend 18 billion more hours per week staring at our computer screens.

In the gaming environment, after all, millions of people are focused intently on solving challenging problems and often cooperating in order to do so. Precisely this kind of focused cooperation is needed to solve climate change, the energy crisis, and all the other disasters on our doorstep.

But here’s the problem: can resolving problems in a virtual world ever be as emotionally satisfying as killing bad guys and wiping out civilizations? In a devastating spoof by John Oliver, The World of PeaceCraft shows just how boring peace simulations can be. Yes, you too can go online and experience hours and hours of tedious haggling over clauses in documents that may never get signed anyway. The highest drama comes when, out of frustration, you bang your head repeatedly against the negotiating table.

So, which is it: a world saved by gamers or a world lulled to sleep by too many hours spent glued to a computer screen?

The answer might depend on your age. My parents, and even my older brothers, would never willingly play computer games. But I was part of the first generation to grow up with these virtual worlds. I first played Pong in elementary school on my best friend’s TV, experienced Space Invaders as a middle schooler at the neighborhood pool hall, and tried out one of the first text-based role-playing games on my college computer system.

Although my computer gaming these days consists largely of chess and Scrabble, I am fully comfortable in the virtual world. Everyone younger than me who has had access to computers since they were kids has an even greater comfort level.

Another generational change is that we have become entirely accustomed to working with far-flung and often anonymous collaborators. Crowd-sourcing is not just Wikipedia these days. For instance, you can join tens of thousands of fellow explorers to find the burial place of Genghis Khan via National Geographic’s online “noninvasive survey.” Or you can donate some of your computer’s computing power to the search for extraterrestrial intelligence. Surely this swarm power can be used to resolve global problems.

Inspired by my hour as a border official checking documents, I’m going to offer a few different ideas of what could make both interesting and useful foreign policy games. I’m going to assume, based on my experience of watching what people do on their commute to work, that playing games will increasingly take up our waking hours with or without the encouragement of Jane McGonigal. And I’m also going to assume, based on my experience playing Papers, Please, that even the most unpromising subject for a game can be made compelling, World of PeaceCraft notwithstanding.

The first group of games I’ll categorize as Shock and Awe. These are applications designed to jolt us out of our complacency by making abstract or distant problems more immediate.

Take the example of climate change. There are dozens of climate change simulations, including one that allows you to replay the world climate negotiations to achieve a better result, and another that prompts you to make changes in your own lifestyle to reduce your carbon footprint.

But what about a “game” that shows you exactly what your hometown — and even your home — will look like 50 years from now if climate change continues unabated? You can find out what the average temperature will be and whether the seawater will be up to your second-floor window. The game would draw on Google Maps to give you a realistic picture of the world outside your window — what your street or even your very house would look like underwater or surrounded by desert. It would be a version of Alan Weisman’s The World Without Us, which imagined an Earth without any earthlings. But this game would be The World Is Very Much With Us — Along with All Our Carbon Emissions.

Other Shock and Awe games would include Inequality (a graphic depiction of how more violence and more gated communities would transform your locality), Fundamentalism (what would happen to your community if the most prominent fundamentalist group in your vicinity took political power), and Drone World (what the sky above your house would look like if every governmental and corporate entity began to use drones for surveillance, deliveries, and other “services”).

The second group of games would use crowd-sourcing to come up with solutions to pressing problems. These “cooperate and combat” games would bear some resemblance to the gaming scenarios the Pentagon runs. But instead of contingency planning for the Army and Special Forces, these games would would promote civic responses to worst-case scenarios and provide potentially useful data for policy professionals.

It’s fun to be a virus spreading around the world. But what about a pandemic game that brings together players around the world to deal with an outbreak of avian flu in real time? Players must make decisions about airport closures, hospital staffing, and new regulatory protocols. Those with specific expertise — on medicine, epidemiology, public policy — would weigh in with their suggestions. Players would have to assess the various trade-offs at the local, national, and global levels. The pandemic would spread according to a set algorithm, resources would be limited and unevenly distributed, and communities would be continuously rated on the effectiveness of their response.

Such “cooperate and combat” games might also include Natural Disaster (The world must address a series of interconnected extreme weather events), Crop Failure (A virus wipes out the world’s wheat production), and Global Financial Crisis (The spread of complex financial instruments creates an unsustainable bubble and…Oh, I guess this already happened. But maybe we can game out better responses than TARP and German austerity).

It’s one thing to address problems on the horizon. But what about taking a more proactive and transformative approach to the world’s problems? Shock and Awe games raise awareness. Cooperate and Combat games deal with impending emergencies. But React and Resist games bring together disparate actors to imagine other possible worlds.

For instance, imagine a game in which you have to cut 20 percent of the next military budget. You have in front of you all the line items. And when you propose a cut, you see exactly what will happen in terms of job reductions, base closures, and lobbyist pushback. Can you and your other online participants devise an optimal compromise that achieves the goal while meeting other criteria such as equity in cuts across armed services and voting districts, elimination of waste by a certain percentage, and reduction of bureaucracy? More importantly, how do you use the tactics from the Street Heat pull-down menu to create political support for these cuts?

Here are some other React and Resist games: Shut Down the Trade (where participants create a monitoring and enforcement regime that disrupts and reduces sex trafficking), Buy Local (in which players create a local currency system that actually works), and The New Bretton Woods (where gamers rebuild the international financial architecture from the ground up). These “games” would bring together experts and amateurs from around the world to create virtual models that could then be implemented if there is sufficient political will.

In his famous short story “On Exactitude in Science,” Jorge Luis Borges describes a map that becomes ever more detailed until finally it is the same size as the country it was designed to represent. By making games that are ever more complex and representative of our modern reality, are we effectively reproducing, in all its particulars, a precise simulacrum of the tedium of everyday life? Why would anyone who is not paid to do so spend hours and hours poring over the details of a defense budget or a spreading pandemic?

But perhaps by taking these tasks out of the realm of bureaucracy and subjecting them to the wisdom of the crowd, we can not only come up with better solutions but, dare I say it, have fun doing so. In dreams begin responsibilities. In games begins the recreation of our futures.