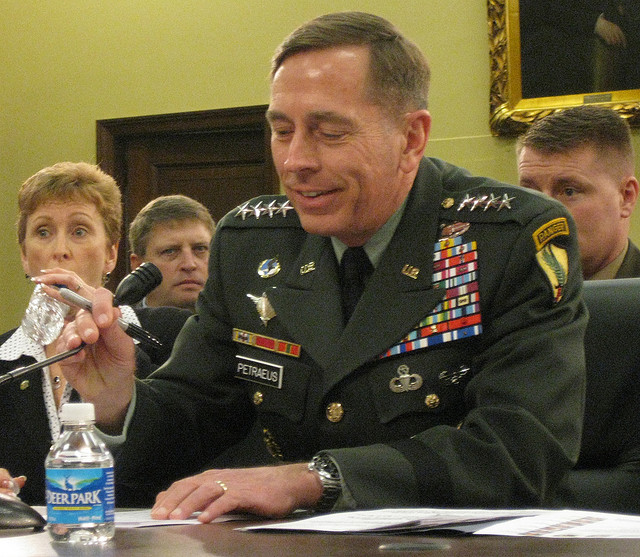 It’s Not That Gen. Petraeus’s Punishment Is Too Lenient, But That Others’ Is Too Heavy

Yes, Gen. Petraeus got off lightly, but the real issue is the harsh punishment for others whose offenses were negligible.
By Russ Wellen | March 11, 2015

Retired four-star general and former CIA Director Gen. David Petraeus, as you have no doubt heard, pled guilty to lending classified journals to his biographer and, briefly, paramour, Paula Broadwell. He will most likely receive two years of probation and a $40,000 fine.

As stated in the federal district court case against, Petraeus “entered into various agreements into the United States regarding the protection and proper handling of classified information.” While commander of the ISAF (International Security Assistance Force) in Afghanistan, he kept notebooks dramatically called in the filing “black books,” which contained “classified information regarding the identities of covert officers, war strategy, intelligence capabilities and mechanisms, diplomatic discussions, quotes, and deliberative discussions from high-level National Security Council meetings, and [the defendant’s discussions] with the President of the United States of America.” They also contained “Top Secret/SCI and code word information.”

At First Look, Peter Maass writes that the decision “all but confirms a two-tier justice system in which senior officials are slapped on the wrist for serious violations while lesser officials are harshly prosecuted for relatively minor infractions.”

By way of example, he writes that

… last year, after a five-year standoff with federal prosecutors, Stephen Kim, a former State Department official, pleaded guilty to one count of violating the Espionage Act when he discussed a classified report about North Korea with Fox News reporter James Rosen in 2009. Kim did not hand over a copy of the report — he just discussed it, and nothing else — and the report was subsequently described in court documents as a “nothing burger” in terms of its sensitivity. Kim is currently in prison on a 13-month sentence.

Despite the sensitivity of the material Petraeus passed along, Kim’s lawyer Abbe Lowell said:

“The issue is not whether General Petraeus was dealt with too leniently, because the pleadings indicate good reason for that result. … The issue is whether others are dealt with far too severely for conduct that is no different. This underscores the random, disparate and often unfair application of the national security laws where higher-ups are treated better than lower-downs.”

Thus, as the Guardian reports:

The sweetheart deal the Justice Department gave to former CIA director David Petraeus for leaking top secret information compared to the stiff jail sentences other low-level leakers have received under the Obama administration has led to renewed calls for leniency for NSA whistleblower Edward Snowden. And no one makes the case better than famed whistleblower Daniel Ellsberg.

Ellsberg, the first person ever charged under the Espionage Act or any other statute for leaking the Pentagon Papers to Congress and seventeen newspapers, told me on Thursday: “The factual charges against [Edward Snowden] are not more serious, as violations of the classification regulations and non-disclosure agreements, than those Petraeus has admitted to, which are actually quite spectacular.”

At Foreign Policy, Rosa Brooks approaches the charges against Petraeus from another angle:

The existence of what looks like a double standard tempts us to … conclude that any injustice caused by a system in which the powerful get more lenient sentences than the powerless can be cured by — you guessed it — simply locking up those powerful malefactors in the same prison cells as the lower-status wrongdoers.

… we’re missing the more important point: Our legal framework for classifying information and dealing with its disclosure is all messed up.

Our government massively overclassifies innocuous information, then demands that employees with security clearances abide by a confusing, arbitrary, and ridiculously cumbersome set of rules to safeguard classified material. The underlying goal is the prevention of damage to U.S. national security interests, but the rules are so incoherent that even the most conscientious employees tend to fall afoul of them at one time or another.

Among the measures Ms. Brooks suggests to remedy this are:

… rapidly declassify innocuous materials, and develop more flexible and efficient mechanisms for sharing classified information with allies, partners, and others when needed.

Ensure that no one — powerful or powerless — will face loss of security clearances or criminal penalties for one-time or minor lapses that do no damage to national security.

Improve protections for genuine whistleblowers and for those who disclose classified information in the good-faith belief that doing so has been authorized.

Still, how gratifying would it have been to see Gen. David Petraeus lose his pension?