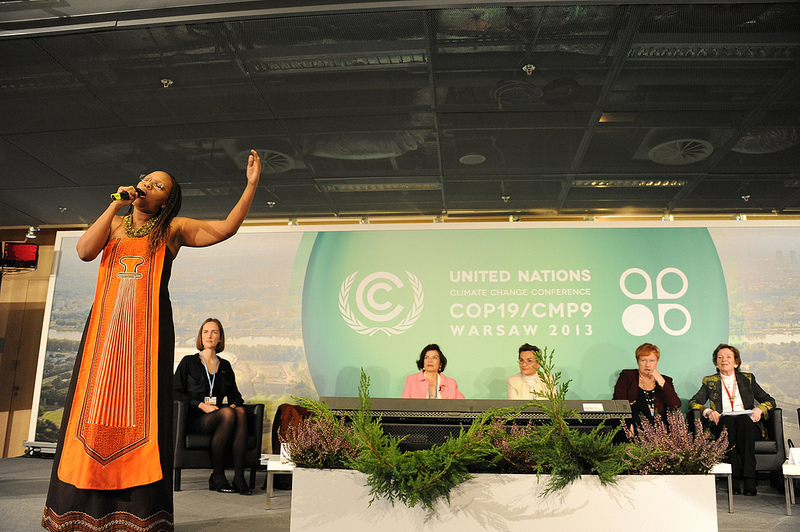 Gender shapes our relationship with the environment. In an age of climate change, a new Environment and Gender Index measures which countries are making the connection. (Photo: UNclimatechange / Flickr)

Integrating women into environmental decision-making is critical to addressing the issues arising from climate change.
By Tamar Abrams | December 11, 2013

The images of typhoon damage coming out of the Philippines over the past few weeks are horrifying, softened only by the global response to those in peril. In such catastrophes, women and girls are at greater risk, particularly in low-income countries. Natural disasters and climate change often exacerbate existing inequalities and discrimination, including those that are gender-based. This in turn can sometimes lead to new forms of discrimination.

That intersection of gender and environment was on display in Warsaw, Poland in mid-November at the 19th session of the United Nations Framework Convention on Climate Change (UNFCCC). On Gender Day — November 19 — the International Union for Conservation of Nature (IUCN) released the first-ever Environment and Gender Index (EGI) that monitors gender equality and women’s empowerment in the environmental area. The Index ranks 72 countries on how they are translating gender and environment mandates into national policy and planning.

Countries were ranked based on a large number of indicators including livelihoods, ecosystem, and women in leadership positions. The strongest performers are Iceland, Netherlands, and Norway. Iceland has been “one of the few OECD [Organization for Economic Cooperation and Development] countries that connected gender and climate change mitigation,” explained Rebecca Pearl-Martinez, EGI Manager. “Iceland is forward thinking on this.”

The lowest-ranking countries are the Democratic Republic of the Congo, Yemen, and Mauritania. The United States reached only 14th place. Its failure to ratify the Convention on the Elimination of All Forms of Discrimination Against Women (CEDAW), for instance, pushed it below many other developed nations. By highlighting the best practices of the top-ranking countries — and naming and shaming the worst performers — the EGI places women at the center of the climate change debate.

Lessons of the Index

To rise in the index and adequately address issues arising from climate change, integrating women in environment-related decision-making is critical. Gender shapes our relationship with the environment — women and men have different responsibilities and needs in relation to natural resources.

A number of social issues contribute to women’s disempowerment, from insecure land and tenure rights to obstructed access to natural resource assets. Women often have limited opportunities for participating in decision-making. They frequently lack of access to markets, capital, training, and technologies. They shoulder the double burden of responsibilities inside and outside the household. Gender equality could greatly improve natural resource management and sustainable development as well as transform the gender-blind decision-making that further entrenches hardships for women.

Unfortunately, one of the lessons of the Index is that much of the data needed to rank the countries is lacking. Sex-disaggregated data doesn’t exist for matters concerning forestry, agriculture, water, energy, natural disasters, and infrastructure. Liberian President Ellen Johnson-Sirleaf writes in the Index preface, “Tremendous gaps exist — at all levels — that hinder comprehensive progress. The information that exists to propel national policymaking and programming forward is too often limited, too frequently fragmented, and too repeatedly generic, not only in Liberia but around the globe.” For the EGI, the Index team produced seven new datasets, including how gender-environment is addressed in country reports to the Rio Conventions and CEDAW, and the average percentage of women in country delegations to the Rio Conventions.

Lorena Aguilar, Global Senior Gender Advisor for IUCN, says that is the point: “Our aim is to promote a culture of greater transparency and accountability, and to contribute to the full, effective, and sustained implementation of international agreements on gender equality and women’s rights.”

Iceland is not the only country that excels in how it has integrated gender into environmental policy. Poland ranks highest worldwide in the ecosystem category, and Costa Rica scores highest for governance in the Latin American and Caribbean region. Mongolia was a top performer in Asia, and Liberia scored in the top tier for access to credit, land, and property (with women’s legal rights equivalent to men’s).

Although Mozambique ranked 55th out of 72, its government is committed to moving up in the rankings. “Mozambique was the first country in the world to establish a national climate change and gender action plan,” said Ana Chichava, deputy minister of the environment in Mozambique.  “We expect that the EGI’s information about Mozambique’s performance will help guide our efforts toward gender equality and environmental protection.”

Response to the launch of the Index in Warsaw was uniformly positive, even though not everyone was happy with their country’s ranking. Former President of Finland Tarja Halonen bemoaned the fact that Finland ranked behind France and wondered what could be done to improve her nation’s rank. Other EU representatives at the launch promised to use the tool and requested specific data on how to perform better. They were also interested in the performance of their bilateral partners in the developing world to determine where investments should be targeted.

Ensuring that women’s voices are heard is a main motivation for the Environment and Gender Index. But it’s clear that much has to change for that to happen. Women often lead in innovative approaches to climate change but seldom sit at decision-making tables. Women throughout Africa, Asia, and Latin America are poised to lead in small-scale energy entrepreneurship, but the world’s financing mechanisms do not yet reach them. For the past 20 years, governments have been making commitments to gender equality and women’s empowerment in institutional environmental negotiations such as the Rio Conventions, but these commitments are not implemented. And no institution has monitored countries’ progress until now.

Although the United States doesn’t fare well in the ranking when compared to other developed countries, there are a few simple steps the U.S. government can take to rise above no. 14. Signing CEDAW would be a significant advance. Improving the number of women in policy-making positions is also critical. The United States scores among the lowest OECD countries in the Index on that indicator, lower even than Tanzania, Mozambique, and Uganda.

The U.S. government is clearly rethinking how much attention should be paid to gender. At the launch of the Environment and Gender Index in Warsaw, White House Council on Environmental Quality Chair Nancy Sutley talked about the State Department’s new initiative wPOWER – Promoting Women’s Critical Role in Clean Energy Solutions to Climate Change. This is a step in the right direction.

IUCN has vowed that this is only the first in a series of Environment and Gender Indexes. The hope is that it will push countries to take seriously their commitments while following the lead of those nations that rank highest. The mere act of creating such an Index has already attracted notice. The Environment and Gender Index has been nominated for a prestigious Katerva Award, which engages global thought leaders from business, government, NGOs, and academia to track down the world’s best sustainability initiatives.

Tamar Abrams is communications strategist for nonprofits with a special interest in global health and development, and a contributor to Foreign Policy In Focus. To download a copy of the Index or to learn more about it, visit http://environmentgenderindex.org/.