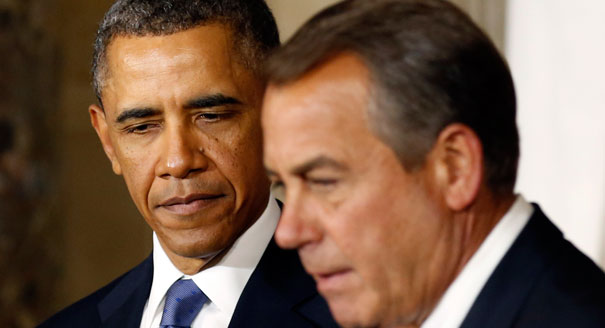 The Geo-political Reverberations of a Government Shutdown

Other states watch our struggles with a blend of concern and schadenfreude.
By Sina Toossi | October 16, 2013

As political gridlock continues to grip Washington, the prospect of the United States defaulting on its debt looms ever more prominently on the horizon. Such an event – were it to occur – would have far-reaching consequences. Not only for the short-term interests of certain politicians or political parties, but for the greater geo-political stature of the United States.

The weakening of U.S. soft-power is already evident. As politicians wrangle with one another in the halls of Congress, rival powers are watching with concern and no doubt grim satisfaction as the United States takes the world economy to the edge of a cliff.

“It is mission critical that this be resolved as soon as possible,” Lagarde said.

The IMF’s chief economist has further added, “”The effects of any failure to repay the debt would be felt right away, leading to potentially major disruptions in financial markets, both in the United States and abroad.”

Recently, Chinese and Japanese officials (both huge investors in U.S. treasury bonds) have also advised the United States to resolve its ongoing political crisis to avoid hurting the global economy.

“The U.S. must avoid a situation where it cannot pay (for its debt) and its triple-A ranking plunges all of a sudden. The U.S. must be fully aware that if that happens, the U.S. would fall into fiscal crisis,” Japan’s finance minister said this week.

The United States’ economic and political system – once an unabashed model for the world – is increasingly less and less appealing to people around the world.

The government shutdown and the possibility of a default have certainly not helped reverse this slump in global desire to emulate the United States.

The rating agency Fitch has recently put the U.S. AAA credit rating under review for a downgrade as the Thursday deadline for raising the debt limit nears.

It is imperative for members of Congress to reach a consensus and avert any possibility of the United States not raising its $16.7 trillion debt limit. It is clear that the politicking in Washington is reaching the point where consequential damage is being done to the broader and longer term national interests of the United States.