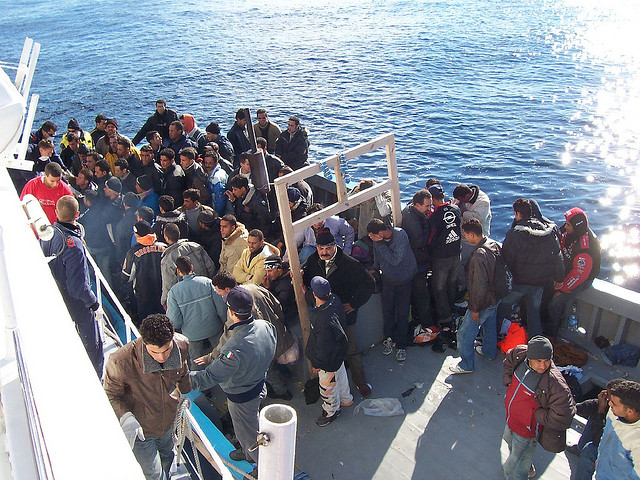 Germany Shames U.S. With Its Policies Toward Refugees, China, and Russia

Despite risks to domestic politics and local administration, Germany is opening its gates to vast numbers of refugees.
By Keith K C Hui | September 28, 2015

Maher Zain, a 1981-born singer who was just eight when his Lebanese family was admitted by Sweden, is the latest showcase that Muslim immigrants can make contributions to world peace rather than causing troubles to their receiving countries. With millions of fans in Europe, England, Malaysia, Indonesia, Palestine, Pakistan and China, Zain’s anti-war songs [Note 1] are no less heart-touching than Pakistan-born Canadian singer Irfan Makki’s “You and I”. Yet, Germany is the only state in the West camp welcoming Muslim refugees when all its peers hesitate. Berlin’s once again deviation means something important to International Relations.

While Chancellor Angela Merkel is preparing Germany to admit as many as 800,000 refugees by the end of 2015 (for example, allocating 20% of the refugees to its most populous state North Rhine-Westphalia [Note 2]), Secretary of State John Kerry “said the current cap of 70,000 migrants annually will be increased to 85,000 next fiscal year and 100,000 in 2017” [Note 3]. Britain, the United States’ closest ally, will only accept “up to 20,000 Syrian refugees by 2020 on the same day Germany said it plans to spend US$6.7 billion to deal with an influx of thousands of migrants from the Middle East and North Africa” [Note 4]. It is of course correct to say that Germany would benefit economically from a large influx of laborers. This move would nonetheless generate various and even incalculable risks to not just domestic politics but also local administration. Despite being named skeptically (or sarcastically) as “Mother Angela” that her decision “has divided Europe”, Chancellor Merkel has shown her resolute to welcome the refugees in mass volume [Note 5].

After its firm opposition to the Iraq War and absence from the direct intervention into the Arab Spring events, Berlin’s un-cruel attitude towards Russia over Ukraine and its friendly policy towards China are indications that Germany has been somehow behaving consistently in a very different manner from the mainstream West.

Throughout the Ukraine crisis, Germany appears more tolerant of Russia’s aggressive influence over it.    With better understanding of the historical background of the “Russian Idea”, Berlin seems to prefer staying aside to let the Russians and Ukrainians solve their ethnical knots — “The claim to the legacy of Rus’ (the ancient core from which the Russian state developed) became so important for Russian identity that … Vladimir-Suzdal and later Muscovy were the true dynastic and cultural successors of Kievan Rus’. This is why the possession of Ukraine, the heart of the lands of Rus’, became a vital ingredient in legitimizing the Russian identity … it was claimed that the inhabitants of present-day Ukraine were Russians”. [Note 6].

From a realist geopolitical perspective, Kremlin’s invasive behavior in Ukraine and annexation of Crimea present threats to the NATO. Alternatively, viewing the conflicts inside Ukraine as of an ethnic nature, there could be no worry of further intrusion into the heart of Europe. The Merkel Administration tactically refrained from taking harsh measures against Russia, thus lowering the chance of unnecessary escalation to military confrontation between NATO and Russia. Furthermore, should there be an opportunity for a negotiated secession as the ultimate solution to the standoff, the non-hegemonic Germany would play a leading role to have it realized without bloodshed.

None of the contemporary German government leaders including the incumbent Merkel (2005-present), Gerhard Schroder (1998-2005) and Helmut Kohl (1982-98) were as enthusiastic about China as Jacques Chirac (French President 1995-2007 who launched a colorful Year of China 2004 in France and had the Eiffel Tower bathed in scarlet red lights for the first time in history to honor China [Note 7]). Behind the plain German-Chinese relation, however, Berlin rarely has a spat with Beijing, except acting on behalf of EU over trade matters. Former Chancellor Schroder had even tried to persuade the Parliament to lift the arms embargo against China in 2004 [Note 8].

When France and Italy are in the main selling fashion goods to Chinese consumers, Germany’s high-performance producer goods ranging from cranes to gas turbines have been shipped to China without political questioning. Mid-sized German manufacturers (mittelstand) are also open to Chinese acquisitions without political barriers (examples are M-Tec, a dry mortar producer, and Putzmeister, a concrete machinery firm). On global matters, Berlin has been consistently supporting China’s engagement with the European Union as well as mediating roles in the Middle East and Sudan. Among the 57 founding member states of the China-founded Asia Infrastructure Investment Bank, Germany’s 4.57% share ranks the fourth highest, only below China (30.34%), India (8.52%) and Russia (6.66%).    Above all, there is no sign whatsoever that Merkel is interested in joining any effort to ‘contain China’ [Note 9]. Quite on the contrary, Berlin welcomes China’s rise and participation into global affairs through either the United Nations or certain supranational organizations.

If there is a philosophical theme behind a foreign policy and it is Pragmatism in Beijing, Pan-Slavism in Moscow, Utilitarianism in London, then what is resisting hard to Washington’s Liberal Universalism is Berlin’s strong inclination towards Internationalism. In no doubt, nor any reservation, do the post-WWII Germans share with the American creeds — liberty, equality, rule of law, democracy and Christian ethics, but the Germans also have a long tradition of criticizing Liberalism at least since Hegel. Harsh critiques of the bellicose American way are common amongst the indigenous theorists, be they the Frankfurt School, the informal Ritter School or the students of Carl Schmitt (1888-1985).

With a higher moral status after accepting a huge number of refugees, Germany will have a stronger base to choose its role and position to play in world politics. Its metamorphosis would eventually become another solid footing for an ‘International Society’ [Note 10] to operate in the 21st century.

“Why don’t we share the same love? Your neighbor, my neighbor, we’re neighbors.”

“Let’s get rid of hatred and see each other as we really are.”