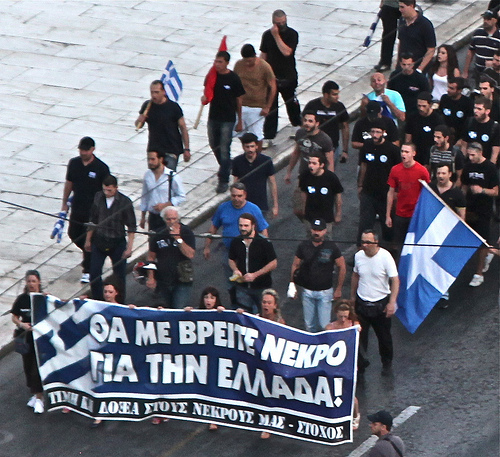 he profile of Golden Dawn in Greece, pictured here demonstrating in 2012, is eerily similar to that of the German National Socialist (Nazi) Party in its early years. (Photo: Steve Jurvetson / Wikimedia Commons)

As Germany squeezes Greece, it’s in denial about the skimpy reparations it paid Greece for World War II.
By Conn Hallinan | March 17, 2015

Memory is selective and therein lays an explanation for some of the deep animosity between Berlin and Athens in the current debt crisis that has shaken the European Union (EU) to its foundations.

For German Finance Minister Wolfgang Schauble, “memory” goes back to 2007 when Greece was caught up in the worldwide financial conflagration touched off by American and European speculators. Berlin was a major donor in the 240 billion Euro “bailout”—89 percent of which went to pay off the gambling debts of German, French, Dutch and British banks. Schauble wants that debt repaid.

Millions of Greeks are concerned about unpaid debts as well, although their memories stretch back a little further.

In July, 1943 Wehrmacht General Hubert Lanz, commander of the First Mountain Division, was annoyed because two of his officers had been threatened by civilians in the Western Greek town of Kommeno. It was dangerous to irritate a German commander during the 1941-45 occupation of Greece.

Lanz first murdered 153 men, women and children—ages one to 75—in Mousiotitsas, then surrounded Kommeno, where his troops systematically killed 317 people, including 172 women. Thirteen were one-year old, and 38 people were burned alive in their houses. After the massacre, the soldiers ate their lunch in the village square, surrounded the by bodies of the dead, and then pushed on to other villages, killing more than 200 civilians.

It was not the first, nor the last massacre of Greeks, and most people in that country can recite them like the beads on a rosary: Kondomari (60 killed); Kardanos (180 killed); Alikianos (118 killed); Viannos (over 500 killed); Amari (164 killed); Kalavryta (over 700 killed); Distomo (214 killed). All in all, the Germans destroyed more than 460 villages, executed 130,000 civilians, and murdered virtually the entire Jewish population—60,000—during the occupation.

On top of that, Athens was forced to “lend” Germany 475 million Reich marks—estimated today at 14 billion Euros—to pay for the occupation. Adding interest to the loan makes that figure somewhere around 95 billion Euros.

The Greeks “remember” a few other things about those massacres. Gen. Kurtl Student, the butcher of Kondomari, Kardanos, and Alikianos, was sentenced to five years after the war, but got out early on medical grounds. The beast of Mousiotitsas and Kommeno, Gen. Lanz, was sentenced to 12 years, served three, and became a major military and security advisor to the German Free Democratic Party. In 1954 he wrote a book about his exploits and died in bed in 1982. Gen. Karl von Le Suire of Kalavryta fame was not so lucky. Captured by the Soviets, he died in a Stalingrad POW camp in 1954. Lt. Gen. Friedrich-Wilhelm Muller, who ordered the Viannos massacre, was tried and executed by the Greeks in 1947.

It is not hard to see why many Greeks see a certain relationship between what the Germans did to Greece during the occupation and what is being done to it today. There are no massacres—although suicide rates are through the ceiling—and no mass starvation, but 44 percent of the Greek people are now below the poverty line, the economy shattered, and Greeks feel they no longer control their country. Up until the last election, they didn’t. The Troika—the European Central Bank, the European Commission, and the International Monetary Fund—dictated the price of the loan: layoffs, wage and pension reductions, and huge cutbacks in health care. True, their occupiers did not wear the double thunderbolts of the SS or the field green of the Wehrmacht, but armies in pinstripes and silk ties can inflict a lot of damage.

Germany dismisses the Greek demand for reparations—estimated at anywhere from some 160 billion Euros to over 677 billion Euros—as a long-dead issue that was decided back in 1960 when the Greek government signed a Bilateral Agreement with Berlin and accepted 115 million Deutschmarks in compensation.

“It is our firm belief that questions or reparations and compensation have been legally and politically resolved,” said Steffen Seibert, a spokesperson for German Chancellor Angela Merkel. “We should concentrate on current issues and, hopefully what will be a good future.”

But that is a selective reading of history. There was never any “resolution” of Nazi Germany’s post-war debts because the country was divided between East and West. The 1953 Treaty of London cut Germany’s obligations in half and stretched out debt payments, but the Treaty did not address reparations because they were supposed to be resolved in the final peace treaty. However, with Germany divided, there was no such agreement.

When Germany was unified in 1990, the Greeks raised the issue of reparations, but the Germans dismissed the issue as resolved by the combination of the London Treaty and the 1960 payoff. But not according to historian Hagen Fleischer, who has studied the reparations issue and the original loan documents. Fleischer says that Germany first argued that as long as the country was divided, Berlin could not consider repaying any debts. “Then after German reunification Helmut Kohl [then Chancellor] and Hans-Dietrich Genscher [then Foreign Minister] said that it was now much too late. The matter was ancient history.”

According to the Syriza government, the 115 million marks Germany paid in 1960 were only in compensation for Greek victims of Nazism, not the physical damage to the country, the destruction of the economy, or the forced loans.

“Germany has never properly paid reparations for the damage done to Greece,” argues Greek Prime Minister Alexis Tspiras. “After the reunification of Germany in 1990 the legal and political conditions were created for this issue to be solved. But since then, German governments chose silence, legal tricks and delay.”

Many Greeks refuse to accept what they consider a paltry sum for the vast crimes of the occupation. Four descendents of the 214 civilians massacred by the 4th SS Panzergrenadier Division at Distomo sued and, in 1997, were awarded 37.5 million Euros, a ruling upheld by the Greek Supreme Court in 2000. When Germany refused to recognize the verdict, the defendants took their case to Italy, and in 2008 an Italian court ruled that the plaintiffs had the right to seize German-owed property in compensation for the Greek award, including a villa on Lake Como.

Germany appealed the Italian decision to the International Court at the Hague, which found in favor of Berlin on a principle of international law that countries are immune from the jurisdiction of other states.

However, Germany has assets in Greece, including property and the Goethe Institute, a leading cultural center in Athens. Justice Minister Nikos Paraskevopoulos says he is ready to begin seizing German assets in Greece.

Tsipras says Germany has a “moral obligation” to pay reparations, a sentiment that some on the German left agrees with. “From a moral point of view, Germany ought to pay off these old compensations and the ‘war loan’ that they got during the Occupation,” says Gabriele Zimmer of Die Linke, a party closely allied to Syriza in the European Parliament.

Addressing the Greek Parliamentary Committee for Claiming the German Reparations on Mar. 10, Tsipras asked, “Why do we tackle the past” instead of focusing on the future? “But what country, what people can have a future if it does not honor its history and its struggles?”

Dismissing the argument that reparations are ancient history—“The generation of the Occupation and the National Resistance is still living”—Tsipras warned about the consequences of amnesia: “The crimes and destruction caused by the troops of the Third Reich, across the Greek territory, but also across the entire Europe” are memories “that must be preserved in the younger generations. We have a duty—historical, political, ethical—to preserve, remember forever what Nazism means, what fascism means.”

Nazism is not a memory that needs a lot of refreshing in Greece. Sometime this spring some 70 members of the neo-Nazi Golden Dawn Party, including 16 current and former Parliament members, will go on trial for being members of a “criminal organization.” The anti-Semitic and racist Golden Dawn Party has been associated with several murders, attacks on leftists, trade unionists, and immigrants, and has close ties with the police and several of the billionaire oligarchs who dominate Greek politics and the economy.

Indeed, its profile is eerily similar to that of the German National Socialist Party (Nazi) in its early years. Golden Dawn has 17 members of Parliament and is the third highest vote getter in the country, though its support has recently dipped.

Old memories certainly fuel Greek anger at Germany, but so do the current policies of enforced austerity that Berlin has played a pivotal role in inflicting on debt-ravaged Greece. “Germany’s Europe has finished,” says Greek Social Security Minister Dimitris Statoulis, the Europe “where Germany forbids and all other countries execute orders.”

Thanks to Kia Mistilis, journalist, photographer and editor, for providing material for this column.