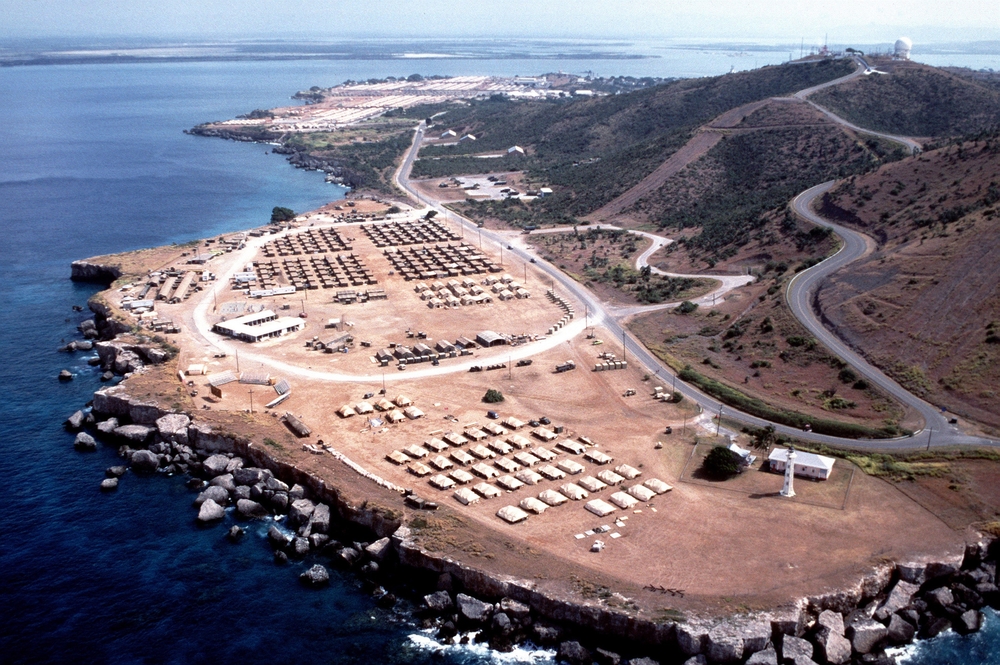 It is time for President Biden to turn the page once and for all on this sordid chapter in our nation’s history.
By Farrah Hassen | January 19, 2022

The U.S. prison at the Guantánamo Bay naval base reached its shameful 20th anniversary of operations on January 11 — with a legacy marked by the detention of nearly 800 Muslim men and boys, the majority of them held without charge or trial for years and many subjected to torture and other cruel and inhumane treatment.

President Biden has so far failed to take consequential action during his first year in office to fulfill his pledge of closing the prison before his term ends. His administration has in fact done the opposite and is now reportedly spending millions of dollars to upgrade it.

Weeks after taking office, Biden initiated an interagency review of operations at Guantánamo. He has since overseen the release of only one prisoner, Abdul Latif Nasser from Morocco, even though 13 of the remaining 39 men had been approved for release by high-level U.S. government review processes.

Nasser spent 19 years at Guantánamo without charge before being freed last July. His release, however, had already been negotiated and approved during the Obama administration in 2016.

On the day of Gitmo’s 20th anniversary, the Pentagon announced that five more detainees held for years without charge have been approved for release, now bringing that total to 18. If Nasser’s case is any indication, however, detainees could still remain imprisoned at Gitmo well into or even beyond Biden’s presidency, with no seeming urgency in sight.

In a perhaps telling move, President Biden has not yet reestablished a special envoy position at the State Department created under President Obama to close Guantánamo. His contradictory approach to the prison is also evident in his administration’s latest plans to build a second courtroom at Gitmo for continued military commissions trials, likely to cost American taxpayers $4 million, as the New York Times reported on December 29, 2021. This suggests prolonging the prison rather than closing it.

The new courtroom aims to have military judges holding proceedings simultaneously by 2023, and disturbingly when it comes to transparency, will ban the public from the chamber.

Additional courtroom space will not address the real reasons behind the Kafkaesque judicial process at Guantánamo however. More importantly, the prison was intentionally designed to be a legal black hole for bypassing the U.S. Constitution and international law.

It was created in 2002 by then-President Bush during his “War on Terror” to ostensibly house those Vice President Dick Cheney declared “the worst of the worst,” but it has since become synonymous with blatant abuse and injustice.

Searing and dehumanizing images have emerged of prisoners in bright orange jumpsuits kneeling before U.S. soldiers, shackled, handcuffed, hooded, and blindfolded. Grisly human rights violations have also been exposed. Prisoners have been subjected to extraordinary rendition and documented acts of physical and psychological torture, including extended sleep deprivation and waterboarding during CIA “enhanced interrogations,” as well as religious persecution and humiliation for their Islamic faith.

Subsequent military commissions at Gitmo have further thwarted justice and transparency. These commissions have deprived detainees of their fundamental due process rights, including the right to meaningfully challenge the basis of their detention in federal court, as affirmed by the Supreme Court in the Boumediene v. Bush ruling of 2008. The Court’s earlier 2006 decision in Hamdan v. Rumsfeld also held that the military commissions used to try detainees at Guantánamo violated both U.S. law and the four Geneva Conventions.

Further, the International Covenant on Civil and Political Rights, a treaty ratified by the U.S., not only prohibits torture under any circumstance, but also arbitrary and indefinite detention of any person without charge.

While Biden has sought to expand Gitmo facilities, Congress has also put up roadblocks to closing it. The 2022 defense authorization bill, which Biden signed last December, extends prohibitions on transferring Gitmo detainees to the U.S. or other countries. This effectively prevents Biden from shutting down the prison, a fact he acknowledged while still signing the bill into law.

To bypass this congressional funding freeze, which also stymied Obama’s efforts to close Gitmo, President Biden can and must pursue executive action to honor his pledge.

He should use his executive authority to empower the Justice Department to pursue plea agreements in federal courts, which attorneys and human rights organizations have advocated. For the 12 men at various stages of military prosecution, Biden, as commander-in-chief, should pursue negotiated resolutions to their cases rather than rely on the failed military commissions, as Department of Defense attorney Ian Moss recommends.

Of the remaining 39 detainees, those already cleared for release and others who have not faced criminal charges should be immediately repatriated to their home countries if possible or resettled in third countries with security guarantees.

And fundamentally, meaningful accountability and remedy for decades of human rights abuses at Guantánamo must follow. As Human Rights Watch and the Watson Institute’s latest report reiterates, “The U.S. government has failed to hold account the key architects of post 9/11 unlawful renditions, detentions, and torture.”

While America’s longest war in Afghanistan may have ended, each day the Guantánamo prison remains open tarnishes our global standing. The indefinite detention of these prisoners without charge, alongside their mistreatment, flouts U.S. and international law. Furthermore, the end to war in Afghanistan has also eroded any legal justification that the U.S. may have had for their continued detention.

More personally for detainees, it means another day of confinement, without seeing their children and families. As five former prisoners wrote in an open letter to President Biden, “Some of us had children who were born in our absence and grew up without fathers. Others experienced the pain of learning that our close relatives died back home waiting in vain for news of our return. Waiting in vain for justice.”

The Guantánamo prison should never have reached its 20th anniversary. It is time to turn the page once and for all on this sordid chapter in our nation’s history.

Farrah Hassen, J.D., is a writer, policy analyst, and adjunct professor in the Department of Political Science at Cal Poly Pomona.