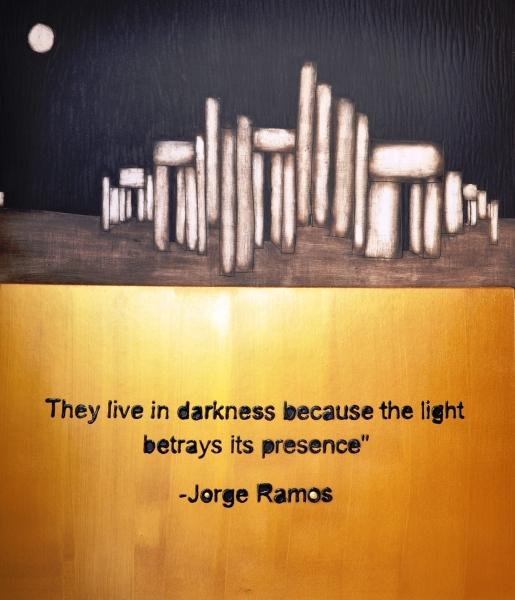 A panel from Huong's immigration mural.

A Vietnamese-American artist who arrived in the United States with one son and one shoe seeks to capture the debate on immigration in a huge mural.
By Peter Certo | December 27, 2011 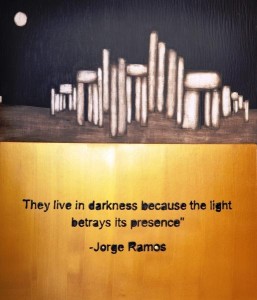 A panel from Huong’s immigration mural.

The U.S. immigration debate has generated a lot of heat over the years, but not necessarily a lot of light. Americans have been talking about the topic for centuries without coming to any firm conclusions. Indeed, the United States has been debating immigration since even before its founding—probably longer, even, than Americans have been self-consciously reminding themselves that they are, after all, a nation of immigrants.

It is the magnitude of this centuries-long discussion that Huong, a Vietnamese-American artist and activist, seeks to capture in her latest mural project, “Immigration – The Wall of Borders.” In a recent visit to the IPS office, Huong was keen to emphasize the scale of the mural: eight feet high and over 200 feet long, with a planned expansion to some 400 feet by the time the mural is unveiled in Miami in January 2012.

The mural displays 200 quotations about American immigrants and immigration from, in Huong’s words, “the first president to the newest immigrant,” and pairs them with prints from her collection of works by Joseph Demarais, a mid-20th-century artist whose haunting explorations of spaces, doors, and empty faces cried out to Huong about the loneliness and desperation of the immigrant struggle. “In his vision 40 years ago,” Huong says of Demarais, “he painted this collection. Twenty years ago, I packed it away. Then 20 years later, when the immigration mural was conceived, Demarais just spoke to me.”

The Freedom to Speak

Huong, of course, knows something about immigration. As Saigon fell in 1975, she escaped in one of the last lifeboats out of the country, clutching her infant son and one remaining shoe. In a tradition befitting Emma Lazarus’ ode to the tired, poor, and huddled masses on the Statue of Liberty, Huong arrived on America’s shores penniless and traumatized. Yet somehow she found a way to make ends meet and bloom into a self-actualized artist and activist.

A few years ago, Huong crafted a controversial mural inspired by the U.S. anti-war movement and America’s long-running (if often muted) debate about how and when it uses its arms abroad. I asked her about the threads that connect war and immigration in the United States. “It’s very personal,” she says in a hushed voice. “It wasn’t very long ago that I was a war refugee, a boat person. I was a wetback from the Pacific, a Gook from Vietnam. But this country opened its doors to me and my son. I hope this door will always be open to every refugee and immigrant in the world.”

Although Huong is unabashed about her own pro-immigration views, she recognizes, even seeks to respect, that hers is hardly the only opinion on the matter. “Because of my background,” she says, “I am all for immigration. And yet, the mural is not me. It is not my voice, and it should not reflect only my image. The mural must achieve the image and the voice of all Americans, regardless of their point of view.”

She means it. By her own account, Huong made every attempt to capture a range of viewpoints for display in the mural. But, unwilling to monopolize this unique effort to curate history, she invites visitors to her website and the mural to offer their own thoughts about immigrants, possibly even for inclusion on the display itself.

I asked if she was concerned that intemperate visitors might sully the project with hostile remarks about immigrants. “All sides, all races, all parties,” she replied. “The mural reflects the voice of America on the subject—not only the lawmaker, not only the president, but the pure voice of the people. In plain talk, not just the politicians’.” True to the First Amendment zeal of the immigrant and the artist, Huong’s insistence on free and inclusive expression is unrelenting. “That is the freedom of this country,” she reminds me. “The freedom to speak!”

In a political space so often filled by anti-immigrant vitriol, I was puzzled and taken aback by Huong’s avowedly neutral approach to her project. Even if she’s willing to endure the occasional xenophobic outburst from a visitor, even if she’s willing to document it, shouldn’t some part of her hope that her mural would bend viewers toward an ultimately pro-immigrant revelation?

“Just the other day,” she offered, “someone said to me, ‘We have too many people. We’ve met the quota. Limit it!’ We have to respect that; it’s one aspect of the conversation.” Then she smiled wanly. “If the Iraq war divided the American people in the past, in the end it united us, because we’re all hurting. The immigration issue divides Americans right now. But before we get to the conclusion, we all have to respect that we have been educated by many people. The mural gives you a different angle to look at, to reeducate yourself, to open your mind. This is the road to peace! We can resolve the problem peacefully, morally, and humanely.”

Apparently, underlying Huong’s commitment to documenting the immigration debate so inclusively and ostensibly neutrally is a profound faith that Americans will make the right decisions once they have had the chance to listen to each other.

Huong’s faith in the wisdom of Americans and the efficacy of dialogue is inspiring, but her examples are instructive. If the American people came eventually to conclude that the wars in Iraq and Vietnam were evil or worn-out, it wasn’t before the enormous human costs both at home and abroad had made the ventures intolerable. And—as the empty faces peering out from Huong’s mural remind us—while the rest of us are working out our feelings about immigrants, human beings are being run out of their homes by anti-immigrant state legislatures and families are being sundered apart by the Obama administration’s aggressive deportation policies.

Still, if Huong’s confidence is well placed, a more humane immigration policy will rise on the horizon only once we find the courage to listen to each other: to our friends, our neighbors, and our lawmakers, to be sure—but also to the human beings behind the empty faces.

Peter CertoForeign Policy In Focus contributor Peter Certo is an editorial assistant with the Institute for Policy Studies.