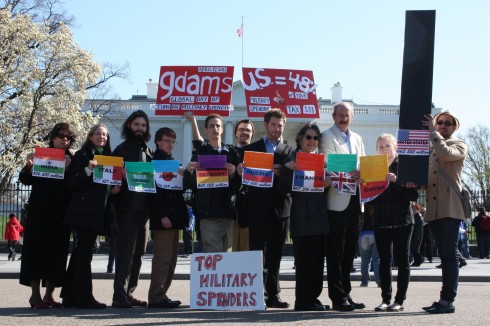 Actions will include a protest in front of the White House at noon.
By fpifadmin | April 6, 2011

On Tuesday, April 12, people in more than 35 countries, as well as Columbus, Dallas, Kansas City and dozens of other cities throughout the United States will participate in the first Global Day of Action on Military Spending.

Actions will include a protest in front of the White House at noon. Other U.S. cities include San Francisco, New York, Boston, Fairbanks, San Juan, and Honolulu (click here for a full list). There will be actions at the United Nations offices in Geneva, a march in Kampala, a demonstration in Dhaka, a women’s peace gathering in Seoul, and much more. The Institute for Policy Studies in Washington, DC and the International Peace Bureau in Geneva, Switzerland are the event’s co-organizers. More than 100 organizations, including Religions for Peace, Scientists for Global Responsibility, the American Friends Service Committee, Win Without War, and Fellowship of Reconciliation have endorsed it.

This global action will come one day after the release on April 11 of the 2010 figures for global military expenditures by the Stockholm International Peace Research Institute. In 2009, the world spent more than $1.5 trillion on the military. Even in the middle of a global economic crisis, military spending has increased, with the United States responsible for nearly half of all expenditures.

“With the U.S. government in a budget crisis, it’s urgent that we move from military deeds to human needs,” says John Feffer of the Institute for Policy Studies and a Global Day organizer. “Meanwhile, other crises have put a great strain on the world’s resources: climate change, earthquakes, global poverty, nuclear proliferation, and the threat of health pandemics. Ever greater funds are necessary to repair the societies that have been damaged by war and conflict, including the latest war in Libya.”

“In the wake of the global economic crisis, some governments — especially here in Europe — are beginning to cut military spending. But they won’t allocate the savings made by these reductions to social/environmental needs or to combat poverty unless we pressure them to do so,” says Colin Archer of the International Peace Bureau and a Global Day organizer. “This is why we are undertaking a serious worldwide mobilizing effort — beginning on April 12 — to make visible our demands to feed the people, not the military-industrial complex.”

The White House action, which will take place at noon, will feature poetry, puppets, and graphic representations of military spending. Representatives of national and local peace and human needs organizations will present “flash facts” that vividly demonstrate how our military dollars can be used more effectively to create jobs, address climate change, and reduce poverty.

Please visit our website, demilitarize.org, for more information about the Global Day of Action on Military Spending, the endorsing organizations, and the specific actions.

The Institute for Policy Studies is a community of public scholars and organizers linking peace, justice, and the environment in the United States and globally. The International Peace Bureau is a Nobel Peace Laureate (1910) with 320 member organizations in 70 countries.