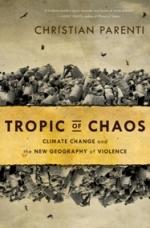 Last month the journal Nature published a paper examining the link between local climate variations and civil conflict around the world. The first quantitative study of its kind, it has received a fair amount of attention for its conclusion that climate shifts do indeed correlate with greater violence. The authors found that the rate of armed conflict doubled — from 3 to 6 percent — during El Nino-associated climate swings, a statistically significant and sobering increase.

Since the study focuses on climate variations associated with El Nino and the Southern Oscillation, its authors warn against extrapolating its findings to draw conclusions about the impacts of global anthropogenic climate change. But it’s difficult to consider such findings in any light other than that of global warming. Climate change has from the beginning been haunted by the specter of intra- and inter-state violence.

When it comes to the intersection of climate and violence, scientific studies like the Nature report lag well behind the strategic literature produced over the last decade by militaries and humanitarian groups. Indeed, a steady march of alarming climate data cast a long and early shadow over the post-Cold War euphoria of the early 1990s. The persistence of violent conflict around the world, together with record-breaking heat and the rise of tighter climate modeling, delivered a double whammy to anyone paying attention. Rather than displacing the threat of global conflict and even conflagration, climate change was likely to compound and accelerate the older threats—including that posed by the thousands of nuclear weapons still sitting so patiently in their silos. By the time climate change started to replace Gorby-mania on the covers of the newsweeklies, the fallout from chronic extreme weather (massive refugee flows, a precipitous drop in global food production) reawakened fears of nuclear war, for instance between India and Pakistan, and the literal kind of fallout. The trend lines, once faint but now starker than ever, seemed fated for a catastrophic collision.

The collision between climate change and violence is the subject of Christian Parenti’s impressive new book, Tropic of Chaos: Climate Change and the New Geography of Violence. The guiding idea is what Parenti calls the “the catastrophic convergence.” By this he means something more geographically and historically targeted than a coming climate-triggered global war. Chaos focuses on a handful of developing countries where the author says climate change is amplifying previous crises with roots in the more climatically stable 20th-century. In this “belt of economically and politically battered post-colonial states girding the planet’s mid-lattitudes,” writes Parenti, “the current and impending dislocations of climate change intersect with the already-existing crises of poverty and violence… one expressing itself through the other. The prior traumas that set the stage for bad adaptation are Cold War-era militarism and the economic pathologies of neoliberal capitalism.”

If Naomi Klein, Mike Davis, and James Howard Kunstler had teamed up to write a book, the result would read something like Tropic of Chaos. And indeed Parenti may owe a debt to the subtitle to Kunstler’s 2006 book, The Long Emergency: Surviving the End of Oil, Climate Change, and Other Converging Catastrophes of the Twenty-First Century. But Parenti’s biggest intellectual debt is to the governments and militaries that have for the better part of a decade been gaming the effects of climate change on global order. Parenti credits the idea of a “Tropic of Chaos” to a 2008 Swedish government study that examined a similar grouping of states “in which the effects of climate change interacting with economic, social, and political problems will create a high-risk of violent conflict.”

If the Swedes study this interaction through the prism of peacekeeping and humanitarianism, the Pentagon views it through the cross-hairs of imperial management. Congressional Republicans may mock the idea of man-made climate change, but the Pentagon brass has long understood runaway carbon emissions as the ultimate “threat multiplier.” Early in the book, Parenti reviews the most important British and U.S. military documents, most dating to the mid-naughts, which discuss climate change in strategic terms. Among the earliest and most influential of these was a 2004 Pentagon-commissioned study stressing the likelihood that climate change would unfold in a non-linear way. The dark report laid out a future scenario in which “disruption and conflict will be endemic features of life. Once again, warfare would define human life.”

The Pentagon understands that its role is not to help avoid this fate by pushing for a de-carbonized economy but to deal with this future the only way it knows how: with razor wire and counterinsurgency. Parenti argues that the political failures of the last century — and of today — position humanity for a return to authoritarian-flavored “exclusionary tribalism” given form by the apparatus of the modern police state. Given the already venomous commentary heard on AM talk radio and Fox News, Parenti is merely stating the obvious in warning that we face a crisis of democracy as well as of climate. Barring a transition toward a greener, more equitable global economy, adaptation will not have a human face but will instead arrive in the form of a neo-fascist surveillance-security state. This future, writes Parenti, will be brought to us care of “parasitic forces that have begun to shape adaptation as the militarized management of civilization’s violent disintegration.”

“the border becomes a text from which to read the future—or a version of it. Here we see how the catastrophic convergence creates both state failure in the Global South and authoritarian state hardening in the Global North… Drought and flood in Mexico and Central America are expressed [as] ICE detention centers. As the planet warms the political tumors of American authoritarianism, our current repression of immigrants, will metastasize.”

Tropic of Chaos illustrates the strengths of merging climate projections with left historical analysis of the poverty and conflicts that define much of the Global South. The result is an important map key to the (possibly near) future, if not strictly a climate book. Viewing climate change as an amplifier of existing inequality and disorder results in a split-screen, one that deals as much with the last century as the current. In many of the chapters, “the new geography of violence” looks a lot like the old geography of violence. The Naxalite rebellion in India has a water and drought component, for instance, but it has also been raging for more than 40 years.

Parenti’s detailed rundown of specific conflicts can feel arbitrary. The thing about climate change, particularly drastic “snap” climate change, is that it will affect every corner of the map in ways that the experience of the twentieth century little prepares us for. Reading the book, I couldn’t help wonder if Parenti’s deft report on cattle raiding in Eastern Africa is really more pressing than, say, the drastic collapse of the grain and wheat crops in the world’s major breadbaskets from Ukraine to Australia.

But there is no denying the relevance and immediacy of the book’s main thesis, powerfully illustrated by the current drought-related famine in Somalia. (See Parenti discuss it here.) The book’s most chilling chapter surveys how climate change threatens to upend the increasingly delicate water balance in South Asia. Kashmir, aside from holding deep symbolic value to both Islamabad and New Delhi, is the source of rivers providing 90 percent of Pakistan’s agricultural irrigation. Because of declining rainfall, these rivers are not what they used to be, and water tables are falling throughout the country. The glaciers that feed the Ganga and Indus rivers in India are likewise shrinking, threatening India’s future water stability.

Although they don’t often make it into media accounts of militant Islam or U.S. Af-Pak policy, climate issues are increasingly relevant. Parenti reminds us that the religious fanatics of Pakistan and Afghanistan “talk of water, god, and violence in the same breath.” Subtract god from the equation, and you also have the battle cry of the Maoist Naxalites, India’s own increasingly climate-driven rebel army. Should India’s water situation throw the country into an even deeper agricultural crisis, Hindu extremists, who have major party representation in the form of the BJP, will likely take up a similar battle cry. And it won’t just be a regional disaster if the two countries go to war over water. The latest science indicates an Indo-Pak nuclear exchange would trigger an atmospheric disturbance that would lead to “worldwide destruction” and a further decimation of global food capacity.

Tropic of Chaos not only asks the right questions. An argument could be made that it deals with the only questions currently worth asking. Climate change is the X Factor lurking behind every other conversation over the direction and shape of our civilization. If the temperature goes up by the predicted six degrees Fahrenheit, Parenti is correct to conclude that all bets will most certainly be off.

Alexander ZaitchikForeign Policy In Focus contributor Alexander Zaitchik is a freelance journalist in Brooklyn. His book, Common Nonsense: Glenn Beck and the Triumph of Ignorance, is published by Wiley & Sons.