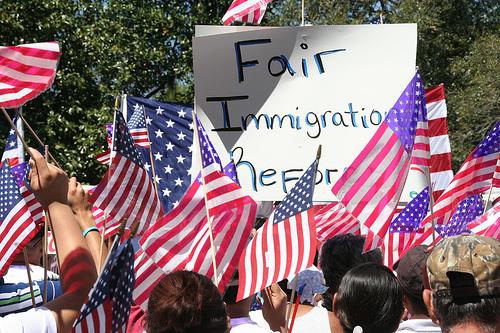 Immigration reform must address not only who is coming over the border to work but why they are doing it.
By Timothy A. Wise | May 5, 2010 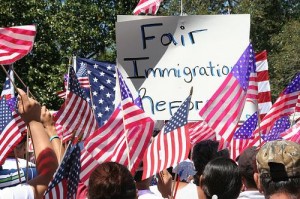 Democratic Party leaders recently introduced their latest proposal to reform U.S. immigration policy. The proposal, which is given little chance of passage in a polarized election year, offers carrots and sticks in an attempt to bring some semblance of order to a broken and outdated policy that has left nearly 12 million people in the United States without legal documents.

The carrots are few and shriveled: an arduous path to U.S. citizenship for those already in the country. The sticks are large: a further crackdown on border enforcement and increased policing to catch and punish those without papers. No combination of carrots and sticks will address the immigration issue unless reform efforts also take up the agricultural, trade, and labor policies that feed migration.

The Meat of the Matter

Industrial livestock firms such as Smithfield and Tyson are among the big winners from the range of U.S. policies, which serve them both inside the United States and across the border in Mexico. These multinational giants are so dependent on immigrant labor — documented and undocumented — that they shut many of their packing houses to avoid the embarrassment of empty factories when labor protests on May 1, 2006 declared a “Day without Immigrants.”

These companies also benefit from U.S. agricultural policies. Reforms in the 1996 Farm Bill deregulated the last vestiges of the supply-management policies the government had used to balance supply and demand, and to maintain stable prices for consumers and remunerative prices for farmers. With deregulation, land that had been held out of production came back in, production jumped, and prices fell 40 percent to levels well below the costs of production.

This policy change gave the industrial consumers of U.S. farm products an enormous gift: vast quantities of below-cost crops. For industrial hog and chicken companies, the boon came in the form of discounted feed, which is made up mainly of corn and soybeans. From 1997-2005, corn prices were 23 percent below production costs while soy sold for 15 percent below cost. For a company like Smithfield, this amounted to a 26 percent discount on feed, their main operating expense, and thus a 15 percent “implicit subsidy” to their operating costs. Smithfield saved an estimated $2.5 billion during that nine-year period.

Agricultural policy connects to the immigration problem through trade policy. The North American Free Trade Agreement (NAFTA), which took effect in 1994, promised to allow Mexico to “export goods, not people.” NAFTA not only opened Mexico’s borders to U.S. meat, with pork exports increasing over 700 percent from their pre-NAFTA levels. The treaty also gave U.S.-based multinational firms greater freedom to invest in Mexico, where Smithfield dramatically expanded its operations. Through its joint-venture partners, the firm is now the largest hog producer in Mexico, with more than 15 percent of the market.

Still waiting for the immigration connection? Smithfield’s Mexican hog operations put a lot of small-scale hog farmers out of business, as producer prices fell 56 percent in real terms. More importantly, U.S. exports of below-cost corn flowed south in a torrent thanks to NAFTA. U.S. exports increased over 400 percent while real prices in Mexico declined by two-thirds. These shocks to rural Mexico pushed an estimated 2.3 million people out of agriculture between 1993 and 2008, among them former corn and hog farmers desperate for work.

A few of them no doubt found work in Smithfield’s Mexican hog operations. But with the Mexican economy floundering under the NAFTA economic model, many looked northward for their jobs. Migration to the United States doubled from the already high pre-NAFTA levels, despite stepped-up enforcement along the U.S.-Mexico border. The border crackdown not only failed to slow the influx, it paradoxically encouraged those who survived the perilous journey to stay rather than risk repeated trips for seasonal work, as many had done before.

Hogs In, Workers Out

The new migrants have found work in the United States at Smithfield and other industrial livestock operations, among other places. Undocumented workers make up an estimated one-quarter of the workforce in packing houses. Once there, both documented and undocumented immigrants confront the final policy gift to multinational agribusiness: labor policies that make it hard for workers to organize to defend their rights. Smithfield’s persistent violations of U.S. labor laws at its massive Tar Heel plant prevented unionization for over a decade, until a broad-based campaign brought a union to Smithfield in 2008.

Beyond a broken immigration system, U.S. policies make U.S. farm products cheap, open borders so we can dump them on Mexico, promote an economic development model that fails to create jobs, and make it easy for companies to use undocumented workers to drive down wages and prevent unionization.

The United States certainly needs a new immigration policy. But we also need new agricultural policies that allow farmers to earn a decent price for their products. We need new trade policies that help our trading partners grow and create jobs, rather than opening the doors for agribusiness and dumping cheap products on poor farmers. And we need new labor policies that protect the rights of workers — citizens and immigrants, with and without documents — rather than the rights of multinational firms.

Timothy A. WiseTimothy A. Wise is a contributor to Foreign Policy In Focus and the policy research director at the Global Development and Environment Institute at Tufts University, where he studies agriculture and development and directs the Feeding the Factory Farm Project. This commentary was also published on the Triple Crisis Blog on finance, development and the environment.